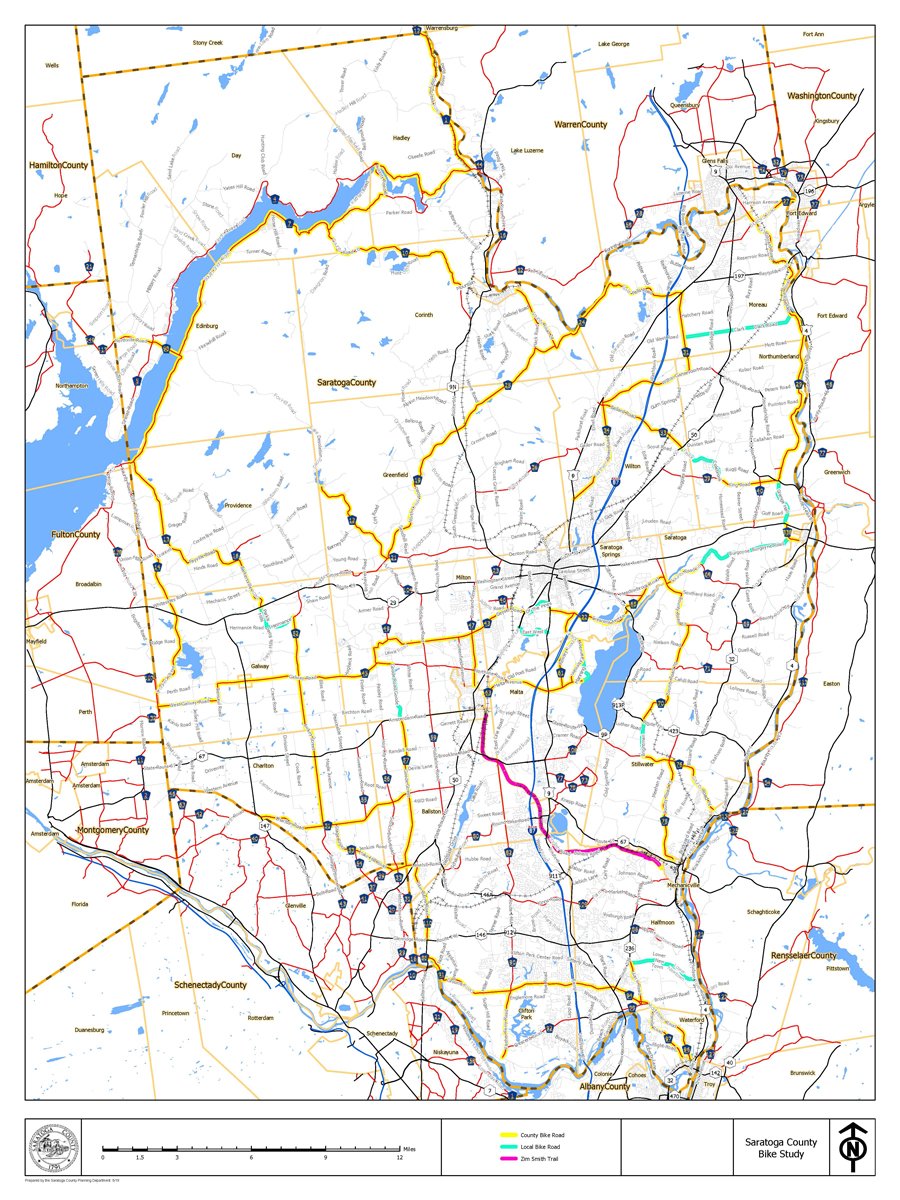 BALLSTON SPA — In a move that promises to increase the quality of life for local residents as well as provide a future opportunity to secure tourism dollars for municipalities throughout the county, the Board of Supervisors on Nov. 16 unanimously approved and adopted an official Saratoga County Bike Route Map.

The map was created through the collaborative input of representatives from area cycling clubs and government leaders in Saratoga Springs and
Saratoga County.

“It’s the culmination of about three years of work with a subcommittee of city residents and county officials,” said city Supervisor Matt Veitch, following the adoption of the measure. “You’re going to start to see those green bike route signs on roads all over the county, so it will be great to see people start doing some bike tourism, all over the county.”

“This is a great start for improving the health and quality of life benefits that we bring to our residents, as well as the potential for tourism dollars,” said Martin. “I’ve taken many day trips that have included just about every part of the map route.”

Martin cited states such as Colorado, which have multi-day biking tours that provide positive economic impact for local communities.

“I’ve had the pleasure of riding several times on one of these tours – it’s called Ride The Rockies – and is in its 38th year. It’s estimated to generate a quarter of a million dollars of revenue – per day – for the towns and villages it travels through.” In Iowa, the RAGBRAI (Register’s Annual Great Bicycle Ride Across Iowa) is in its 47th year, and draws 15,000 cyclist to its 7-day, 500-mile trip. “The economic impact in 2021 was estimated to be $25 million in direct spending in the cities and towns the tour runs through.” Martin said.

“You have a real opportunity here. Our county roads are a real resource,” echoed Ed Lindner, of Bikeatoga. “This beginning is an important step, and you need to build on it.”

• Having made revisions to the Saratoga County tentative 2022 budget, the Board of Supervisors, as required by county law, approved a public hearing regarding the revised tentative 2022 budget. The public hearing will take place 4:45 p.m. on Nov. 30 at the county complex, 40 McMaster St., Ballston Spa. The county initially proposed its $381 million budget in October. It is anticipated budget adoption will take place Dec. 8. The 87-page 2022 Tentative Budget with Amendments may be viewed via the county website at: saratogacountyny.gov/wp/wp-content/uploads /2021/11/2022-Budget-Workshop -Report.pdf.

“I did try in our workshop to amend the budget to provide more funding for non-profits. That did not pass,” said Supervisor Tara Gaston. “We’ve heard from non-profits in the city and throughout the county interested in some support recovering from COVID, and I would recommend they come speak to us in order for supervisors to hear that and potentially amend the budget before we pass it in December.”

• In the City of Saratoga Springs meanwhile, the City Council on Nov. 16 adopted a $54.2 million operating budget for 2022. The City Council will seat four new members on Jan. 1. DPW Commissioner Anthony “Skip” Scirocco is the one returning member. The current council members, completing their respective two-year terms and it is anticipated the final two meetings of this current council will take place on Dec. 7, and Dec. 21.