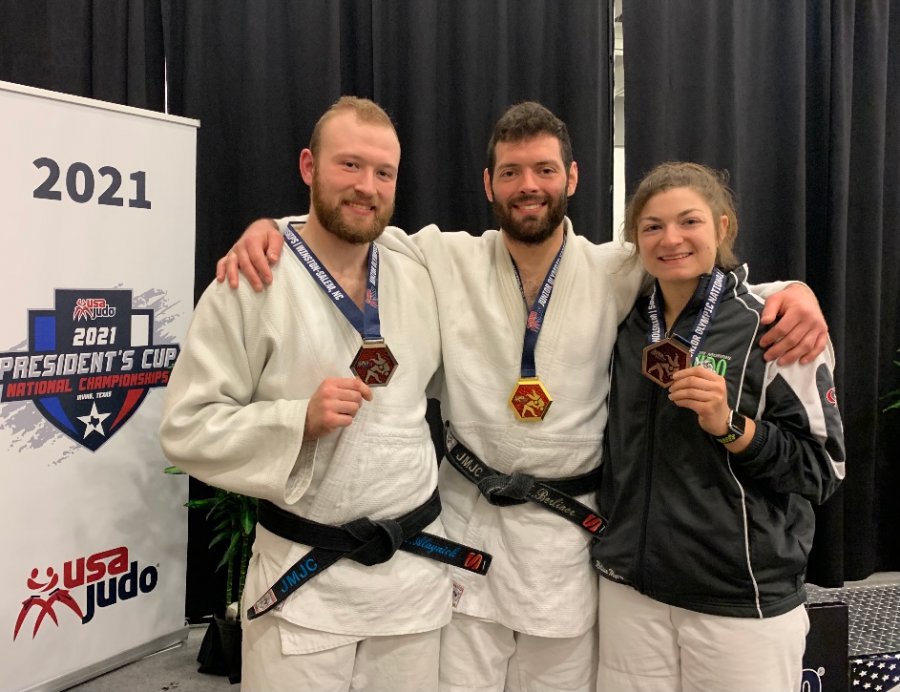 IVRING, TX — Kell Berliner (27) from the Glenville, NY based Jason Morris Judo Center (JMJC) enjoyed a stellar weekend at the 55th Annual Dallas Invitational Judo Championships on Saturday, Nov. 20, and then the USA Judo’s Presidents Cup on Sunday, Nov. 21, both held at the Irving Convention Center. Berliner went 5-1 to take an 81kg bronze at the Dallas Invitational, then climbed to the top of the podium the next day at the Presidents Cup, going 5-0 to capture the 81kg gold. Max Alaynick (21) had a great day going 4-1, losing only in the 81kg final to JMJC teammate Kell Berliner, to take silver in the Presidents Cup. Ramon Hernandez (20) took 5th place at the 81kg as the JMJC were represented well at that weight class. Melissa Myers went 3-1 at the Presidents Cup to win a bronze medal at 70kg. JMJC’s Zach Judy (28) went 2-2 each day to place 7th in both events at 60kg. Next up for the JMJC athletes is an in-house competition held at the Jason Morris Judo Center starting at noon on Saturday, Nov. 27 that all are welcome to check out.

SARATOGA COUNTY – The Sage Colleges is expanding its Capital Region footprint. The private, liberal arts college has announced it will soon begin offering a Master of Business Administration program at the Hudson Valley Community College (HVCC) TEC-SMART facility in Malta this fall.

Aside from Empire State College, no other higher education institution offers MBA programs in the Saratoga area.

“There really aren’t a lot of choices, particularly for an MBA, up towards the North Country,” explained Kimberly Fredericks, Ph.D., associate dean of Sage’s School of Management. “We know that there’s a niche up there. It’s a growing community – Saratoga, Malta…really Saratoga County in its entirety is a growing community, and we wanted to make education accessible and flexible.”

Administrators say classes will be offered in an accelerated format – two classes one night a week- evenings from 6 to 10 p.m. The fall 2015 classes will include “Management of Change and Innovation” and “Human Resource Management.” It is the same MBA program offered at Sage’s Albany location, only now it’s accessible in Malta.

“So many kids and adults are driving a long distance, so I’m going to either catch them on their way to work or next door to their employers so education can be accessible, affordable and flexible,” said Frederickson. “We cater to working adults in all of our graduate programs currently. We have night classes and sometimes once a week or even once a month because everybody works.”

The professional MBA program is designed to develop leaders who can manage complex organizations and who have the desire and capability to move into high-level positions. For nearly three decades, Sage MBA graduates have taken major leadership roles in business, government, health care and non-profit organizations. The program is accredited by the International Assembly for Collegiate Business Education (IACBE).

Fredericks says the college may add coursework for additional programs in the future, but wanted to start with an MBA program because of Malta’s growing business community; like the Luther Forest Technology Campus (LFTC) for example.

“Because we’re a smaller institution, we can be flexible. We have some skill sets in our faculty that not everybody has,” says Fredericks. “For example, we have an intellectual property attorney who can do things with patents, intellectual property or tech transfer that might be attractive to that market up in Malta.”

Due to its location at HVCC TEC-SMART, Fredericks also explained it puts the college in a good position to potentially offer continuing education coursework or seminars to the more than 3,000 employees at LFTC.

“We love being part of the community. We listen to the business community and adapt to what skill sets they want employees to have and we listen to our students and I’m able to put on electives and try certain courses out, because we’re smaller,” said Frederickson.

So far it seems as though Sage’s MBA program in Saratoga County is being well-received. The program has reached its cap at 30 students for the upcoming fall semester. However, applications are still being accepted and Frederickson says adjustments can be made to fit a high demand.

In the next year, school administrators say they hope to see the program grow and become a partner in the Saratoga County community.  The five-year goal for the college’s “Sage in Saratoga” initiative is to offer more graduate- and undergraduate-level programs.

The Sage Colleges is the university to have a presence in three counties – Albany, Rensselaer and now Saratoga.

To learn more about The Sage Colleges MBA program in Malta, visit sage.edu/management.

SARATOGA SPRINGS —The second annual Saratoga Mom Prom—a ladies night out—to benefit Saratoga County Children’s Committee is April 26 from 7 p.m. to 11 p.m. at The Saratoga Hilton.  Pull out your old prom gown or bridesmaid dress (or head to a consignment shop), accessorize in your era of prom and come join the fun. There will be dancing, lite fare, raffle baskets as well as prom activities.

Register for $55 and learn more at www.saratogamomprom.com or call (518) 587-5392.  Benefit a great cause and have fun reliving your prom memories. Age 21 and up are welcome and you do not need to be a mom to attend.

Saratoga County Children’s Committee serves the needs of children throughout Saratoga County.  It is a completely volunteer organization and without a paid staff, 100 percent of monies donated are spent to provide relief to children in need.

The SCCC’s greatest effort is The Empty Stocking Project that provides over 800 children with holiday gifts. Requests are received from agencies such as Domestic Violence Services, EOC, Franklin Community Center, Project Lift, Saratoga Early Intervention, Saratoga County Social Services as well as Nurses in Saratoga County Schools. Throughout the year, the Committee provides such items as clothing, cribs and baby supplies, school supplies and sports equipment, along with special needs such as medical supplies and equipment and dental work.

New members are always welcome.  At this time, there is a need for volunteers willing to   sponsor a child for The Empty Stocking Project.  To volunteer for membership or to sponsor a child, call (518) 587-1236.