More than 200 Celebrate Anniversary of American Victory at Schuylerville 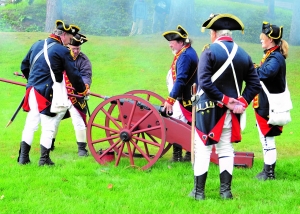 SCHUYLERVILLE — More than 200 area residents, school children, historians and re-enactors gathered on the west bank of the Hudson River Monday morning to celebrate a pivotal anniversary in the birth of the nation.

“Exactly 239 years ago on this very day, in this very place and on this ground where we stand, America had its first victory of the Revolutionary War,” said Amy Bracewell, superintendent at Saratoga National Historical Park and keynote speaker of the Surrender Day gathering at Fort Hardy Park. “This created a snowball effect in the creation of this country.”

The park marks the location where 5,000 British soldiers, accompanied by the lonely beat of a drum, surrendered their arms on the morning of Oct. 17, 1777, following the colonial victories at the battles of Saratoga.

Dressed as members of the Continental Army, a half-dozen re-enactors fired off a booming cannon salute, members of the Daughters and the Sons of the American Revolution presented a laying of wreaths, and a changing of the flags ceremony symbolized American freedom from British rule.

“Our nation was founded on a bold new idea: that a free people in participatory democracy were in the best position to chart the future,” said Democrat Assemblywoman Carrie Woerner, who represents the 113th district of New York. Schuylerville Central School District students Tucker Durr and Madelynn Solan read essays about key figures of the Revolutionary War, and the school’s fifth-grade chorus sang “Yankee Doodle Dandy,” and “My Country ‘Tis Of Thee.” Students from Salem Central School also attended the ceremony.