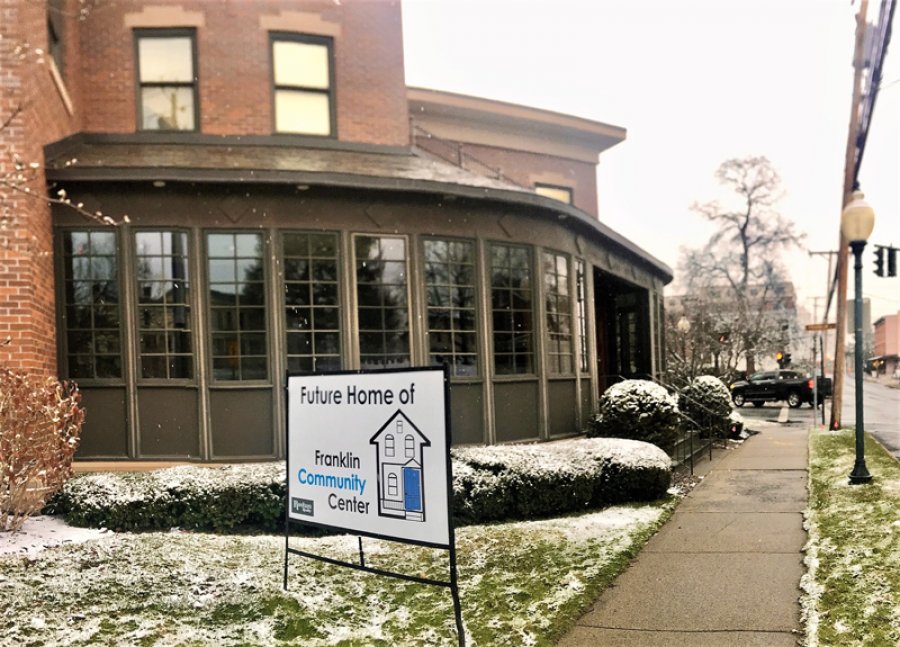 SARATOGA SPRINGS — A cutting-edge center of 21st century global technology and a venue honoring the traditional offerings of helping those in need met at the intersection of Franklin and Washington streets this week in a collaborative effort for the betterment of the local community, and all points beyond.

Elliott and Cathy Masie built the Masie Center on the east side of Saratoga Springs 20 years ago. This week, Franklin Community Center – which serves thousands of people every year locally - has purchased the Masie building and will be expanding their services. The new building, to be renamed the Michael & Stacie Arpey Family Community Center, will allow the Franklin the space it has needed to grow their programs.

Franklin Community Center has served as a social service hub for the less fortunate in and around Saratoga since 1983.

The Center's programs include a food pantry, a free after-school prevention program for local students and affordable housing for low-income individuals, as well as assisting with furniture, clothing and household needs, among others.

“At the beginning of 2019, our board really committed to obtaining more space,” explains FCC Executive Director Kari Cushing.  “We were at a point where the space didn’t provide confidentiality for the people we serve.” A fundraising campaign was initiated with the idea of building an addition to an existing building to create more space.

“We were in the middle of it and had raised about $1 million toward our $2.5 million goal when the world stopped and COVID happened,” Cushing says. “We were no longer able to use our volunteers, so we repurposed all of our staff and since March we’ve been filling grocery bags, unloading trucks, delivering supplies and just doing what needs to get done.”

At the same time, she says, the need for services increased exponentially.

“The numbers have just gone through the roof. The need usually ebbs and flows and goes with the economy, but right now people are in dire need of just basic services. Since the start of the pandemic, just the food pantry has served 2,300 families – and of those 588 of them were brand new, they’d never been to a food pantry before. Those numbers are staggering,” she said.

“In September. I looked across the street and saw a For Sale out in front of the Masie building. It seemed way too good to be true, but we had to at least explore our options.” The building was listed at $2.6 million, and members of the board visited the location.

“When I tell you it’s perfect, that’s an understatement. It’s wide open and we could do whatever we need to do with the interior space, but we were still too far from our fundraising goal. We only had $1 million raised and being a non-profit we’re not comfortable taking out a loan for more than a million dollars. Our Steering Committee met to go over our options and that’s when Stacie Arpey, who’s on our board stepped up to increase her pledge from $100,0000 to $1 million and make it a reality for us. The Masies lowered their original asking price, and a deal was struck. “Between the two of them, it became possible.”

The Masie Center has served for a generation as an international Learning LAB working with global organizations.

“We’ve probably had tens of thousands of executives come from around the world. We helped launch E-Learning there. When the pandemic hit, I looked at my staff and said, ‘OK, go home.’ I gave them computers and lights and screens and after a couple of months predicted, well, we’re not going to go back to regular work soon. We looked at each other and said: maybe this is the time to sell the building.

“After we put the building up for sale, Franklin Community Center was intrigued and one of their board members, Stacie Arpey, and her husband Michael decided they really wanted them to have it and gave them a million dollar donation to get to the price, and Cathy and I lowered (the asking price) by many hundreds of thousands of dollars because we couldn’t think of a better buyer for it than Franklin,” Masie says.

“What I like about Franklin is that they service people who have deep and continuing needs as well as people who have newly arrived at the point of need,” Masie says. “I think we need to be quick to respond to people when they enter that and help put them on a pathway to becoming more self-sustaining. And Franklin does that. The other thing is they work a lot with kids.”

For Masie, the present world continues via video, having conducted keynotes for tens of thousands of people during the pandemic, right from his piano room at home in Saratoga Springs.

“They do so much in that cramped building they’re in now – to have that 10,000 square feet of space, it’s going to be exciting to see what they can do,” said Masie, who conducted a walk-through with FCC staff this week.

“This new home for FCC will help ensure that families in Saratoga Springs having an inviting place to receive the resources of FCC for years to come,” Stacie Arpey said in a statement.

The transition will happen gradually allowing FCC to ensure there are no disruptions to the services provided. The plan is to maintain the current venues and begin adapting some of the organization’s programs into the new venue. “In the beginning of 2021 our goal as a Board will be to really delve into that and see how we can be more efficient and make things easier to access for the folks who use our services. We want to make sure that we make things better for Franklin and for the entire community,” says Cushing, who has been with FCC for 18 years.

“COVID has obviously turned everything upside down and has disrupted all of our lives, but we have a unique perspective: we get to see the other side of it, and I have to tell you how heart-warming it has been to see our community come together to make sure that nobody has to go without,” Cushing says. “We were scared to death when it started and we saw our numbers going through the roof. We didn’t even know if we would be able to serve everyone that came to us.

“Every day we would post our biggest needs on social media and we have a contactless drop-off in the front of our building and every day when we would come in, it would be overflowing with the things we had asked for. We never had to turn anybody away, because people were so generous. This community is absolutely amazing. I think Stacie and Mike embody everything hat our community is and Cathy and Elliott – everybody made it possible, it’s such a group effort and it’s wonderful to see.”

The Michael and Stacie Arpey Family Community Center /Franklin Community Center is in fundraising mode and need just under $1 million to complete their expansion campaign which would include costs for moving and potential renovations to the space.  For more information or to contribute to the campaign go to:   www.franklincommunitycenter.org.