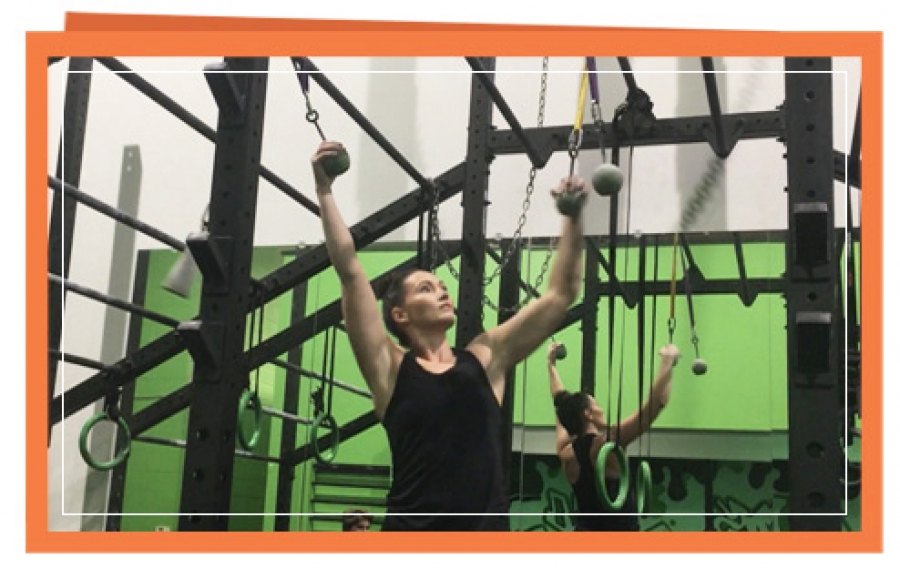 GALWAY — Imagine you’re settled in with your husband and two sons watching the tv show American Ninja Warrior and you suddenly have this thought, “I could do that, too.”

That’s how Galway native Randi Cowper became involved with ninja training. She adventured three hours away to the closest ninja gym, which was in Vermont, and gave it a try. She was immediately hooked. After that, her husband of seven years, Dustin, built her a ninja course in their basement and backyard. She ran track and cross country through high school and college, she also did cross-fit for a few years, but nothing like this before.

“Two years ago, I kind of just decided that I wanted to get on the show, American Ninja Warrior, so my husband built a course in our backyard and I was called to compete in Cleveland last year, where I did really terribly,” Cowper laughed.

“I fell on the second step right in the very beginning of the course so it kind of just gave me more desire to train harder and do better. We then converted our basement into a ninja gym. We have our backyard and our basement, and I was able to get back on Ninja Warrior this year,” she said.

Cowper’s obstacle attempt was not shown on the show this year either, but she did go further than the year before.

“I did a lot better, I almost got to the third obstacle this year, so I just missed the landing platform and fell in the water,” she explained.

This has turned in a passion for Cowper over the last two years, out of nowhere, and now with the Saratoga Ninja Lab opening, she will be a trainer there, finally able to immerse herself in the ninja world, only 20 minutes from home. The Saratoga Ninja Lab is for all-ages and will have summer camps for kids starting in August.

“It’s just so much fun and such a great workout and you don’t even realize you’re working out because you’re having such a good time and then you want to keep doing it,” Cowper said.

In order to get called to compete for a spot on the show, participants must fill out an application and send a threeminute video that makes them stick out from the other 70,000 applicants.

“There is something like 70,000 people who apply to be on the show so to be a normal mom from a small town in upstate New York, you don’t really think you’re going to be one of those people. So, I think the first time was just surreal and I really didn’t have the confidence in myself or my abilities so when I got up there, I was just totally a deer in the headlights, with all the cameras and everything. So, when I got the call this year, obviously I’ve been training for another year, so I feel stronger and better than I ever have, but it’s more of like a self-confidence I never had before from this year over last year,” she said, explaining the difference in performances.3

Cowper does plan to compete again next year.

“The show is great, but the training is not about getting on the show, for me anyway. It’s just about seeing how strong you can become physically and you’re happier and you have a purpose and you feel good about yourself. So, the show is great, that’s kind of like the cherry on top but that’s not why I’ve been training,” she stated.

Cowper’s oldest son, Seth, is “more into video games and he wouldn’t tell me if he thought it was cool just because he’s at that age,” Cowper said.

Her youngest, Aiden, “definitely thinks it’s awesome, he’ll be at the gym,” she said.

For now, she has her day job at the Alpin Haus RV Saratoga location as the business manager and will start training at the Saratoga Ninja Lab once they open.

“When I started doing this, I was just a regular mom who had insecurities and low selfconfidence. The training for the show has totally changed my life, physically, obviously I’m stronger than I’ve ever been, but emotionally, my confidence, it’s awesome and I want to share the passion and love that I have for it with anyone that I can,” she said.