Will Less Be Moore? 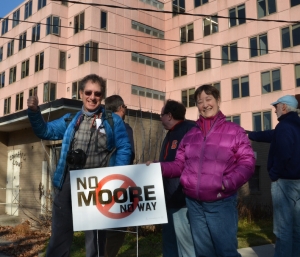 So stated Attorney Michael J. Toohey, representing Bonacio Construction, in announcing a second proposal to develop the Moore Hall property, at the Saratoga Springs Zoning Board of Appeals (ZBA) meeting on Monday, December 14.

The dramatic announcement came as a pleasant surprise to most, if not all, of those in attendance. Residents of the surrounding neighborhood had organized intense opposition to the first proposal – which would have converted the existing building to 53 micro-apartments. The applicants requested that the first proposal be tabled and requested to present the detailed aspects of the new proposal at a January 2016 ZBA meeting.

Principal and Vice President C. Michael Ingersoll of the LA Group, was forthcoming, however, with the broad details of the second proposal, which he and President/Owner Sonny Bonacio of Bonacio Construction said was directly responsive to the nearby neighborhood resident’s concerns, which included density, parking and safety.

A major change in the second proposal is to demolish, rather than convert Moore Hall – a decaying former dormitory that was part of the old Skidmore College campus. A previous variance in 2006 had allowed up to 18 residential units on the parcel. Bonacio noted that this number would not work because of the current market forces. If it were to stay at 18, that would necessitate building units that sold for over $900,000. Those units are averaging 1,947 days on the market, and Bonacio said that if 18 more were built, the inventory of housing at that level would take about 12.9 years to be sold.

Instead, the second proposal detailed construction of 28 units, which would enable the sale price to be just under $700,000 ($699,418), which Bonacio said would make it more attractive and easier to sell to potential buyers. This increased number of units would still require a variance, although not as large as the first proposal’s request to increase it to 53.

The applicants noted that their new proposal was similar in many ways, in terms of visual components such as setbacks for instance, to a plan that had received approval in 2008. At Monday’s meeting, they presented preliminary drawings that showed a comparison of their new proposed development to the one from 2008.

A new application will be filed, and detailed plans need to be developed. The project will still have to go through a site plan review and receive approval from the Design Review Commission. However, it was obvious from comments, from both ZBA members and members of the public who spoke, that this latest proposal was extremely more palatable. Many thanked the applicants for their work in coming forward with something that it was hoped would be acceptable to everyone. “This is just what the neighborhood wanted,” one said.  Another wondered if it was appropriate to sing “Kumbaya.”

So, residents came to Monday’s meeting prepared for more conflict, and came away with at least the beginning of a happy ending to the saga of the Pink Palace. Call it an early holiday gift, with an O. Henry surprise thrown in for good measure.