The remarkable thing about horse racing is its widespread appeal and that was brought to light in a conversation with my mailman the other day.

Patrick Mansfield has manned the route around Saratoga Race Course for most of his 29 years with the U.S. Postal Service.  He was born and raised in Saratoga and claims he doesn’t remember becoming a race fan. His story is proof in the pudding.

I was always a fan. My grandmother owned a home on Nelson Avenue and every season she rented her place and came to stay with us. Jean Cruguet lived there the summer after he won the Triple Crown on Seattle Slew. My grandmother would have parties and every year I got to know more track people.

My first job at the track, I worked as a sweeper. My day started cleaning the pit, that’s the area between the apron of the grandstand and the track. It would be filled with discarded tickets and we’d work with our eyes peeled, but thank God they paid a salary because finding a live ticket didn’t happen very often.

I’m a big fan of Jerry Bailey. Cigar is my all-time favorite horse and Jerry’s signed every one of his win pictures for me.

Frank and Linda Alexander have always been so nice to me. They’ve been on my route for years. I’ll never forget when they won with that Dogwood horse, Slambino. I was alive with my Pick 6 but I didn’t have him because Frank told me he didn’t have a chance. Slambino trailed the field all the way around there and in the last 100 yards he exploded and got up for the win at 88 to 1!

Frank Alexander trained horses for 42 years.  His was victorious in 74 stakes races.  His richest win was with Cherokee Run in the 1994 Breeders’ Cup Sprint. The fast bay was voted sprint champion that same year.  In all, Cherokee Run made 28 starts and visited the winner’s circle 13 times. The Florida-bred champion earned a whopping $1,531,818 and went on to be a successful sire. He’s the perfect poster boy to kick off Saratoga Today’s 2014 Winner’s Circle.

Frank and his wife, Linda, have maintained a home in Saratoga since 2000.

“The best thing about our years in the game were our great owners,” Linda said. “People like Cot Campbell of Dogwood Stables and the Robinson’s (owners of Cherokee Run) really cared for their horses, they always allowed Frank to do right by the horse and that’s what mattered most to us.”

Mike Smith signed a picture of Holy Bull for me back in ’98. That afternoon he had that God-awful spill on the turf. All these years later he’s one of the most elite riders to ever come along and he’s just as nice as he’s always been.

Richard and Evelyn Pollard are such terrific people. I remember how much I hurt for them when their good horse, Saratoga County, got that bad batch of medicine and died.

I have a picture of Funny Cide in my living room. I love racing and go as often as I can. I always take Travers week off and a bunch of my buddies come up for the races, it’s the highlight of my year.

I try to get to Florida at least once or twice a winter. Saratoga Day at Tampa Bay Downs is something I try not to miss. It’s always the first Sunday in March and a lot of fun.

I went to the Kentucky Derby one time. It cost me $50 to park and an infield pass was another $30 and I saw nothing. It was so frustrating. I’ve been to Keeneland and loved it. I’ll go back there. I’ve gone to the Kentucky Horse Park a couple of times to see Cigar and then the last time I was there I got to see Funny Cide too. That was really nice.

It’s funny the things I remember, like the year my parents were putting in a pool. They went out to check on the workers and no one was there. Affirmed and Alydar were pitted against each other in the Travers that day and everyone went to the races, including the pool guys!

The Spring Street Deli is on my route and one of my favorite stops. Dale Romans brings a table full of people there almost every day during the season and on any given day you’re going to meet a lot of backstretch people stopping by to enjoy the great food. It’s just such great energy.

Louie Olah, the silks guy, was one of my favorites. He had a condo on Union Avenue. Sometimes he’d call me even in the winter and when he was here he always invited my family to come to the Jocks’ Room. He loved his job and made every one around him happy.

You ask what it is I like about racing; well it’s a million things, the guys at the feed store, stopping by the museum every day or Ken Ramsey inviting me to join him in the winner’s circle.

The Whitney Viewing Stand is the best thing to happen to Saratoga racing in a long time. Now a guy like me can go to see the morning workouts and I love it. I especially enjoy watching the kids, the way they thrill to see the horses and how they warm up to all the friendly people. There’s no broader smile than that of an exercise rider on his or her favorite horse, unless it be a kid looking up to them. I think it does people good to see how hard all those people on the backside work and to feel the respect they have for the animals.

My youngest daughter has ridden since she was 5. Dressage is her thing. She rides a Thoroughbred. His name is Jasper, but his racing name was Kristi. He was purchased right here at Fasig-Tipton, raced for five years and won in the United States, France and Canada. Calvin Borel rode him and when Calvin was here for Rachel (Alexandra) he was on my route. I got to go see Rachel in her stall. Calvin gave me a bunch of signed caps. I have so many great memories.

I love how everyone decorates their porches and its fun to see people studying their Racing Forms. Racing gives everybody a chance to play at whatever level suits them. Even the fighting for parking can be entertaining, and who doesn’t enjoy all the fancy clothes or watching people pull coolers the size of a Mack trucks to the picnic area?

I miss Harvey Pack and his handicapping show. I always loved how he’d end every session with, “May the horse be with you.” We’re lucky to live in Saratoga and have the horses! They’ll always be with me. 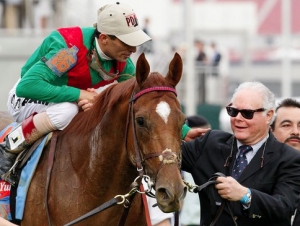 Ms. McCullough will receive the Safe Home Equine Protection Award for her work to end the slaughter of America’s horses.  Her meetings with Vice President Joe Biden and other members of the Executive Branch led to Vice President Biden adding language defunding horse slaughter in the United States to the 2014 Omnibus Bill which President Obama signed on January 17.

“If anyone deserves to be honored for outstanding achievements to protect horses, it is Victoria McCullough,” said Equine Advocates President, Susan Wagner. “She has accomplished what no one has ever done by gaining the support of the administration against horse slaughter which is opposed by the vast majority of Americans. Victoria gathered the science and the facts to prove how slaughtering horses for food is unethical because it is toxic and a serious threat to human health and food safety. Thanks to Victoria’s continuing dedication and generosity I believe we are now on our way to reaching the ultimate goal of a permanent federal ban of horse slaughter.”

Barry Irwin will receive the Ellen and Herbert Moelis Equine Savior Award for his work to ban the use of performance-enhancing drugs in racehorses on race day. He has been one of the most outspoken and eloquent voices in the nation calling for the end of this practice in horse racing.

“Barry Irwin has been a positive force in our industry for many years,” said Ellen and Herb Moelis in a joint statement. “Team Valor, which Barry founded, has been at the pinnacle of our industry. He has managed the career of one of the most interesting horses of our time – Animal Kingdom. His passion for the integrity of our sport has been exemplary. We are proud that Barry will be the recipient of the 2014 Moelis Equine Savior Award by Equine Advocates.”  The Moelis’s co-founded the Thoroughbred Charities of America with the late Allaire du Pont and were honored by Equine Advocates in 2002 for their strong support of equine rescue.

General tickets are $250 per person and include cocktails, hors d’oeuvres, dinner, live and silent auctions and dancing. For more information, call (518) 245-1599. All proceeds from this event will benefit Equine Advocates Horse Rescue, Sanctuary and Humane Education programs.

www.equineadvocates.org – This email address is being protected from spambots. You need JavaScript enabled to view it.

The Horses Are Back

With Saratoga Opening Day just around the corner, the Oklahoma Training Track opened Saturday, April 13. More horses filed in throughout the week in what is the 33rd year since the track opened for training in 1980.

“Hoofprints Walk of Fame” to Honor 30 Horses in Inaugural Class

SARATOGA SPRINGS – This summer, the New York State Racing Association (NYRA) and the Saratoga 150 committee will honor 30 Thoroughbred horses that have made their mark at Saratoga Race Course over the past 150 years and induct them into the newly-created Saratoga Hoofprints Walk of Fame.