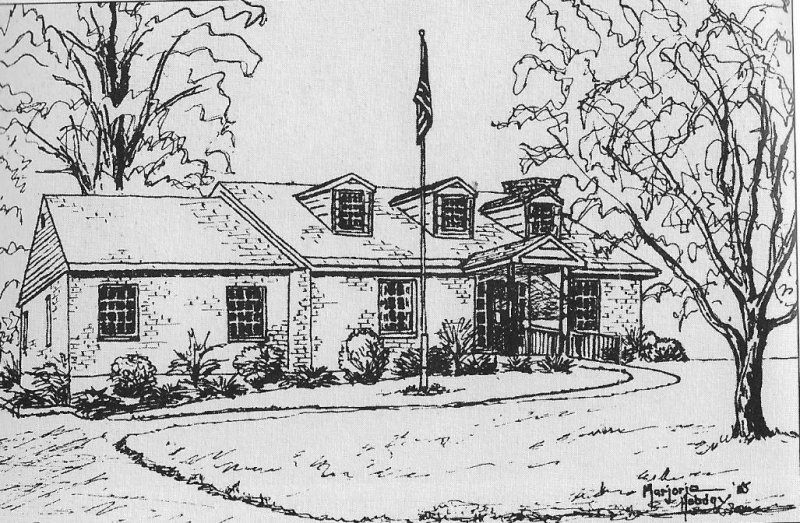 How do you raise money for a library in the 1950s? You do anything and everything you can possibly think of! September 23, 1952, the Burnt Hills-Ballston Lake Rotary and the Burnt Hills-Ballston Lake Women’s Club met at a combined meeting to establish the Library Association which would spearhead fund raisers and begin the process of building a library from the bottom up!

Among other things, the Library Association went door to door soliciting people to come to their homes for breakfast on a particular day—and the invited guests would then be charged for their breakfast!

A benefit musical with folk dancers, auctions, old-timers’ basketball games, bricks for a nickel, and an art show were all also used to raise money to build a library in the community. It worked!

Shortly after, Our Lady of Grace Church on Edward Street in Ballston Lake volunteered to host the first library in Ballston: in the cellar of their church building. At the time, state law mandated that a library had to operate on its own for a year before a charter would be granted by the state and, within the next year, the Townley family donated the land at the present site of the building (although a different building) to create a library in the community.

That first library actually had over 2000 books, either purchased or donated. It was open only 3 days a week but was a very popular place in the community. By 1958, the library had been placed under the auspices of the town of Ballston where it remains today.

That library grew right along with the BHBL community. In reality, you can track many changes that occurred in our state and county by looking at the history of the library itself. The parking lot was paved in 1962, as the automobile became an essential element of suburban communities everywhere. Air conditioning was added in 1963 for the comfort of the patrons of the library. A copier was purchased in 1969, as these machines became essential to our lives. An addition was put on in 1981. Computers were added in 1982.  The American Disabilities Act of 1992 caused a great deal of reflection as some major modifications were necessary to meet that code.

But as the community continued to grow, the building became outgrown and, in 1997, town of Ballston residents passed a resolution to build a new building, right next to where the old one was, actually in the parking lot of the old building. That new library was completed in 2001 and is still in use to this day. (The old building was torn down for a parking lot for the new one.) That new library has twice the shelf capacity of the original one and the building itself is twice as large.

The two beautiful stained-glass windows in the building were created by local resident David Pfaffenbach. One depicts the official seal of the town; the other some of the most important features of the town, i.e., the growing of apples, canoes on the lake, the trolley that made Ballston Lake a tourist attraction, and deer who inhabit the area.

But the library has not finished growing. A 2021 grant will allow the library to create within it a “Local History” room, dedicated to the extensive collection of local resources and allowing for a research area in which to use those resources. The library is located at 2 Lawmar Lane in Burnt Hills.

Rick Reynolds has been the Ballston Town Historian since 2004. He is a retired social studies teacher at Burnt Hills-Ballston Lake Middle school and is the author of the book “From Wilderness to Community: The Burnt Hills-Ballston Lake Central School District. Rick can be reached at This email address is being protected from spambots. You need JavaScript enabled to view it.

Read 174 times
More in this category: « Donald K. Stewart, the Man Behind the Ice Cream George Herrick West and the (not so) Secret Law and Order League »
back to top