Can Saratoga Reopen May 15? Here's What Has to Happen 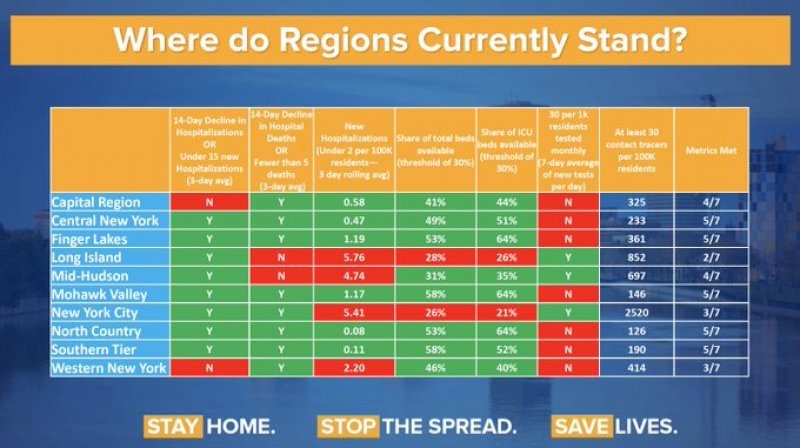 ALBANY — Gov. Andrew Cuomo on Monday announced that portions of the state may be able to reopen on May 15 when the New York on PAUSE order expires.

The potential reopenings will occur in phases by "regions," and only if regions meet a series of benchmarks.

The measures that need to be in place refer to the monitoring capabilities of new infections,  securing there is adequate capacity in the health care system to deal with potential new illnesses and hospitalizations, increased diagnostic testing, and having contact tracing in place to lessen the spread of the disease.

The criteria to reopen is comprised of seven headings. The Capital Region currently meets five of those. Those five include: a 14-day decrease in hospital deaths or fewer than five deaths over a three-day average; less than 2 per 100,000 new hospitalizations over a three-day rolling average; having ample hospital beds available – 41 % of total beds and 44 % of ICU beds where a minimum of 30% is required for each, and exceeding the metric requirements for the number of contact tracers needed.

The regional shortcomings, as depicted in a slide presentation by the governor on Monday, are in two categories. Those are: showing a 14-day decline in hospitalizations or under 15 new hospitalizations, and having a minimum of 30 per 1,000 residents tested monthly. Both the categories are taken as a three-day average.

Using Saratoga County specifically as a reference point, the number of hospitalizations has remained below the 15 person threshold since mid-April, although the county falls short in the testing criteria -  which would require approximately 700 Saratoga County residents be tested every three days. Recently the average number of residents being tested has been just under 500.

Still, it is important to note that Saratoga comprises just one of the eight counties in the Capital "Region" directive. Numbers from all counties must be collected an analyed, and the governor said Monday that regions believing they can start to reopen May 15 must first conduct their own analysis and ensure they meet the approriate criteria. "These are the facts they have to have in place to do it," Cuomo said. "Start now with the analysis; don’t wait until May 15."

The  reopening would happen in stages.

The regional approach would require input from, and the coordination of a variety of people - elected officials and hospital officials, among them. Details regarding the formation of a regional group, or the composition of its members is not immediately known.