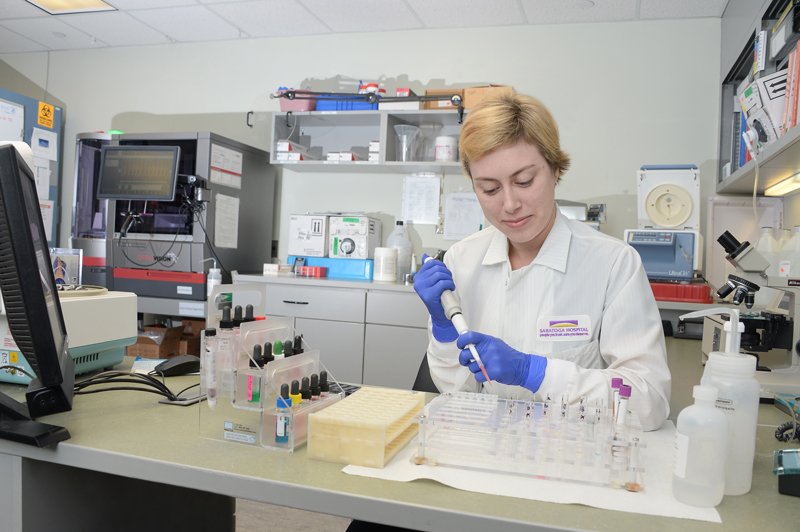 SARATOGA SPRINGS — In every public crisis, people rely on the training and courage of first responders and emergency medical personnel. While that remains true in the COVID-19 pandemic, the teams whose mettle are most tested are in
the laboratory.

Saratoga Hospital’s Chair and Medical Director of Saratoga Hospital Pathology and Laboratory Medicine, Josenia “Joy” Tan, MD, MT(ASCP), FCAP, and Director of Laboratory Services Richard Vandell, MS, MT(ASCP)SC, SH, knew they were facing a virus that spread like wildfire, but no one really knew how or how to identify those infected.

According to Dr. Tan, “Even large laboratories were making decisions in the dark. So we read everything we could get our hands on for ideas. The community was counting on us, so we worked the science and kept figuring it out.”

Dr. David M. Mastrianni, senior vice president of Saratoga Hospital Medical Group, said, “Let me explain how rare our laboratory team is. When we ran out of viral transport media, they made it. When we were low on testing swabs, they had them 3D printed. When testing kits were becoming scarce, they started batch testing. And they couldn’t just implement these changes. They had to first prove these ideas worked. Other lab directors would have given up, but not ours.”

According to Dr. Mastrianni, this response is not typical for labs outside of research campuses or even in larger hospitals. This higher level of function meant the lab was conducting research and validating the results, all while testing the public and patients for the virus as well as performing all their regular non-pandemic duties.

“Our first task was to stop the spread, and you can’t do that without testing to identify who has it,” Vandell said. “We didn’t have enough testing supplies. No one did. But we always find a plan B.”

The lab’s initial accomplishment was to establish a testing tent in record time, making Saratoga Hospital the first and longest continuously running specimen collection facility for the COVID-19 test in the region. Overall, Saratoga Hospital has tested nearly 8,000 people.

Then, to assure the safety of patients and staff and conserve protective gear (PPE), the hospital decided to test every inpatient. For a long time, it was the only hospital in the region to do that. Additionally, the lab obtained “rapid test” capabilities, a test for COVID-19 that could be done in-house and returns quicker results.

These tests remain in short supply, so the lab researched “batch (or pooled) testing” to help conserve them. Five samples of low-risk patients are now combined into one vial. If the test comes back negative, four test kits as well as PPE are saved. If it comes back positive, which only happens less than 1% of the time, patients are retested individually.

Saratoga Hospital offers physician-ordered antibody testing services, an in-house test that is another innovative use of existing resources brought about by the lab team. When rapid test collection swabs were hard to find, the team researched and obtained 3D printed swabs and validated them for use.

When many hospitals stopped testing due to a shortage of viral transport medium, a solution that preserves a patient’s sample on its way to be tested, Saratoga Hospital’s lab and in-house pharmacy made it from scratch, following CDC guidelines, then the lab validated its quality and purity, and now there’s an ample supply.

With the combined efforts of physician leadership, the infectious disease team, senior leadership, and others, the lab also developed a diagnostic algorithm to help physicians decide which test to use and when to use it. At the time, there wasn’t one for COVID-19.

“Our process and data for it have been submitted to the FDA and NYS Department of Health,” Dr. Tan said, “Once authorized, anyone in the country can follow our procedure. It’s remarkable, the amount of collaboration and support we have to do this.”

Working with its affiliate partner, Albany Med, Saratoga Hospital has been able to continuously work with the state laboratory to keep results moving. And Skidmore College loaned its biosafety hood, which allows laboratory scientists to safely handle infectious specimens, once the lab realized the two they had would not be enough to handle the extra capacity.

“There’s so much riding on what we do,” Vandell said. “Testing is key to reopening and will continue to be a challenge into the foreseeable future.”

Dr. Mastrianni agreed. “To successfully meet a pandemic head on, it all boils down to having people who are really bright and a supportive administration that lets them use their imagination, good judgment, and years of experience to do what they do best.”