Business for Good: Local Entrepreneurs Present a Model for Philanthropy 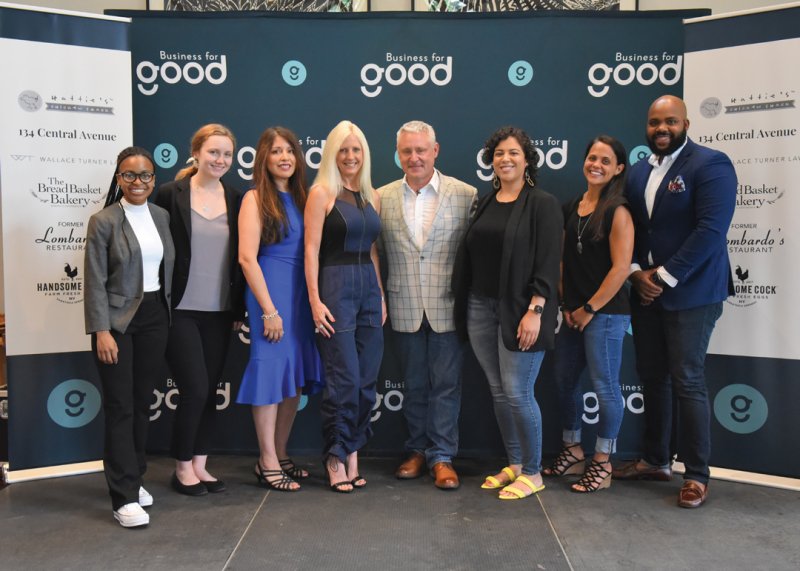 SARATOGA SPRINGS — It is a place where local businesses thrive and share their prosperity with the community. It is where full-time employees receive free healthcare benefits and competitive salaries, and where entrepreneurs are provided tools to help them succeed and flourish.

It is a model called The Business for Good and a vision presented by Ed and Lisa Mitzen and their “team of motivated do-gooders” who believe that equity is key to a brighter future. The idea behind the Business for Good Foundation is in using the team’s successful business skills and experience to help make the world a better place.

“We’ve experienced a level of prosperity that’s still hard to get our minds around. We’re living our dream. And we’re very grateful for it. But we believe dreams should be accessible to everyone,” the Mitzens say.

They established The Business for Good Foundation, a 501c3 charitable organization to assist others in the pursuit of their own dreams. “Help as many people as we could. Do as much good as we could do.”

Lisa said she and Ed have long shared an interest in giving back.

“We always dreamed of starting a foundation,” said Lisa Mitzen, at the foundation’s public launch on July 13 at the Brackett House on North Broadway in Saratoga Springs. The site, which includes offices and a conference center will serve as the organization’s headquarters.

Ed Mitzen was raised in Voorheesville and spent nearly a decade growing Palio Communications into a success before subsequently co-founding Fingerpaint Marketing in Saratoga Springs in 2008.

The Foundation is built on a set of different pillars, Ed Mitzen explained. Owning businesses and taking care of employees while donating all that business’ profits to local charitable causes is one; providing capital and other useable tools such as marketing and mentorship to entrepreneurs, is another. Since its official launch last October, the Foundation has donated $4.4 million in grants and resources across the state.

“We like to describe Business For Good as sort of an umbrella over each of the businesses that are acquired, which are still for-profit businesses, just the profits are then donated to Business For Good so we can then do better for the communities we live and work in,” said Lisa Mitzen, who grew up in nearby Hudson Falls.

The Mitzens acquired the Bread Basket Bakery, which overlooks Congress Park, late last year. “The goal there was to give the staff great pay, great benefits, keep them all there, but change the mission – instead of it being a for-profit business, to donate all the profits to charity,” Ed Mitzen said. Revenue the bakery generates goes directly to fight food insecurity in local communities. A second Bread Basket location is planned to be sited on Weibel Avenue in Saratoga Springs, which will grow the foundation mission by also donating all profits to charity.

The addition to the foundation of the Spa City’s famed Hattie’s Restaurant & Chicken Shack is in the process of being finalized. Employees will be provided “great pay, great benefits, and have 100% of their health care covered,” Mitzen said.  An additional Hattie’s Restaurant is slated to open in the former Lombardo’s Restaurant on Madison Avenue in Albany next year.

Lombardo’s Restaurant served as a cornerstone business in Albany for nearly a century, and its closure left a service and employment gap in an already economically challenged neighborhood. By renovating the building and installing a business such as Hattie’s that will employ locally and return all profits to local charities, the foundation is hoping that both - a piece of Albany history will be preserved, and that it will be a positive contributor to the South End community for years to come.

“The idea of being a part of a consortium of businesses that have tremendous synergy in working together and trying to elevate as many people as possible was really perfect for Hattie’s,” said Jasper Alexander, sporting his buttoned-up white chef uniform as he spoke at Tuesday’s foundation announcement.

Hattie Mosely Austin founded her self-named chicken shack in Saratoga Springs in 1938. Alexander bought Hattie’s in 2001. Jasper and Beth Alexander will remain in charge of the restaurant.

“When I first met with Ed (Mitzen) I was so taken aback because he so bluntly said: I just want to do good. We all say that: ‘I want to do good,’ but here are two people who are, quite frankly, putting their money where their mouth is, and doing good,” said Beth Alexander.

Year-round, Hattie’s employs about 45 workers, a number that grows to about 75 during the summer.    In addition to wage raises, employees will receive health benefits - “a game-changer and something very few restaurants are able to do,” Alexander said.

“It’s a dream come true, and it’s quite frankly saving a historical restaurant. You know the restaurant business is a tough business and Hattie’s has been in Saratoga for 85 years. We just weren’t sure how much longer we were going to be able to do it,” she said.

The foundation recently closed on a building in downtown Voorheesville that had been vacant and previously housed a Stewart’s Shop. In Voorheesville, which is where Ed Mitzen grew up, the community will be surveyed to learn what type of business it is interested in being sited there. That business will be built around the same initiative of donating all the profits to charity.

Additional Business for Good Foundation projects include incorporating what Mitzen calls Accelerated Entrepreneurship. “What we want to do there is use our business backgrounds and skills to help aspiring entrepreneurs in underserved communities realize their dreams of starting their business,” he explained. “There are a lot of really smart, hungry and passionate folks but they don’t really have access to resources. So, what we want to do with the Foundation is provide them with capital, provide them with advice and guidance, provide them with marketing support, IT support, HR, office space and really get them going. We don’t own the businesses; we’re just really trying to help them to become entrepreneurs.”

The first business undertaken in that mode was a brownstone located at 134 Central Ave. in Albany that formerly served as the law offices of prominent African American civil rights attorney Peter Pryor. The building had fallen into disrepair, and the project entailed renovating the building so it may function as an office space for the Wallace Turner Law firm. When completed in the coming months, the project will connect the past and the future by ensuring the continuation of its legacy.

The goal is finding a path of enduring giving to help provide sustained support that leads to lasting change. As the foundation umbrella grows, Mitzen says: “We’re not looking for turn-arounds, it’s too hard. We want people who have been successful, who show a passion for what they do, who believe in our model.”

Mitzen’s father worked for the Albany VA Hospital. His mom worked as a respiratory therapist and nurse at Saratoga Hospital and Albany Medical Center. Mitzen was asked what drives his passion of wanting to give back.