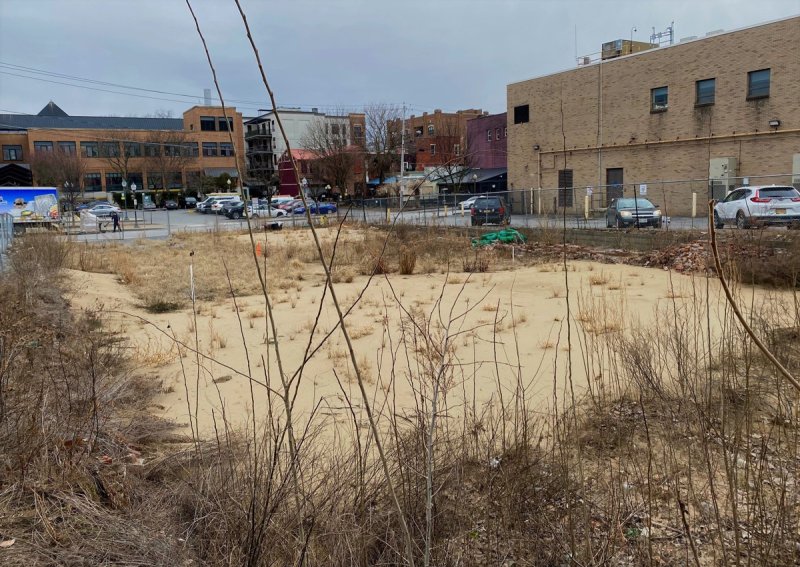 “Putnam Square” – a vacant lot on Putnam Street, depicted in this image captured Jan. 17, 2023 with the Saratoga Springs Public Library in the distance, is a target site for the development of a five-story building housing affordable residential units. Photo by Thomas Dimopoulos.

SARATOGA SPRINGS — The City Council unanimously approved a resolution to seek $1 million in grant funding - via the Restore NY Communities Initiative Municipal Grant Program – that anticipates taking a currently vacant parcel at 53 Putnam St. and redeveloping it into a multi-story building with affordable/mixed-income housing units that will house low-income individuals and families.

At least 20 units in the anticipated 60-unit building are expected to be made available “for low-income individuals and families to own and occupy their own home,” according to the city.

“It’s a win for environmentalists, a win for developers, investors and a win for the city of Saratoga Springs,” city Mayor Ron Kim said during the council’s discussion of the matter on Jan. 17.

The project is located on a NYS Brownfield Environmental Remediation lot, sited opposite the Saratoga Springs Public Library.

Dubbed as “Putnam Square,” the project anticipates development as a public/private partnership between Putnam Resources, and the city along with a variety of local non-profit organizations. The estimated overall project cost is just over $15 million. More than $3 million has already been invested by developers to acquire, manage and clean the site.

“If this works the way it is currently positioned, it will be the first of its kind in the state,” said Commissioner Dillon Moran, drawing a contrasting comparative with the typical home-by-home basis actions, which takes a while to develop, by organizations such as Habitat for Humanity.

Mayor Kim said that “one-third or more” of the 60-unit building will be offered at HUD affordable prices at a percentage of the region’s determined area median income, or AMI. The AMI for all cities across the country fluctuates, and is defined each year by U.S. Department of Housing and Urban Development (HUD).

• The City Council approved the appointment of Joseph Bruchac as Poet Laureate of the city of Saratoga Springs. Bruchac was born and raised in Saratoga Springs and has authored more than 120 books, along with numerous poems and short stories.

The appointment marks the first by the city of a Poet Laureate and carries the duties of serving as a representative of the Saratoga Springs in creating literary and artistic works in commemoration of the city, its history, and its people. The position, which carries through 2025, was unanimously approved by the Council and will be under the supervision and guidance of the Mayor’s Office, in consultation with the arts commission.

• Bob Millis, primary producer of the inaugural Saratoga New Year’s Fest staged Dec. 31-Jan. 1 told the Council that the event was an overall success and will return for its second year.

“We hit all of our markers. We attracted people from across the Northeast, we put them in hotels, we sent them to downtown venues and we generated sales tax,” Millis said. “It was such a great success we have committed to continuing the event into the future.”

• The council approved an addendum to the agreement between the Saratoga Springs City School District and the city of Saratoga Springs that will - beginning on Jan. 30 - have the city assign an additional School Resource Officer to the District’s Elementary Schools.

“The school district had a Safety Survey Report that recommended the addition of two School Resource Officers – one to be provided by the Sheriff’s Department for the two elementary schools outside the city limits, and a recommendation that the city provide an SRO from the Saratoga Springs Police Department for the four elementary schools that are in city limits,” city Public Safety Commissioner Jim Montagnino told the council Jan. 17. “That recommendation was adopted by the school board last week.” The measure was approved by the Saratoga Springs City School District Board of Education by a 5-4 margin.

More in this category: « Anything Broken and Small Enough to Carry: Schuylerville Public Library Hosts Repair Café Sky High: America’s Youngest Pilot Takes to the Skies Over Saratoga Region »
back to top