Smartphones: Comparing the Differences Between iPhones and Androids 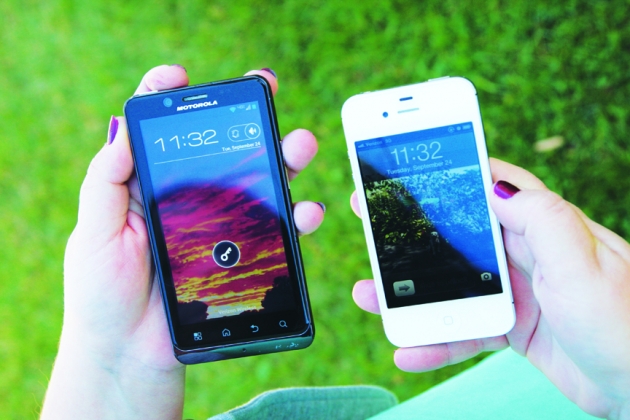 With technology rapidly evolving and new smartphones coming out constantly, it can get pretty tricky to figure out which kind of phone is the best fit for you. Two of the most common smartphones are iPhones, the first ever touch-screen smartphone, and Androids, Apple’s number one competitor.

Here are some of the pros and cons to using each phone that may help you decide which phone is best for you:

iPhones have access to hundreds of thousands of apps on Apple’s iTunes Store that Androids don’t always have access to, and can also sync completely with iPads and other Apple devices. iPhones have a very friendly user interface and are, for the most part, very easy to understand and use. Apple is the only company that makes iPhones, giving the manufacturer total control over how the software and hardware work together, making the phones seamless.

However, Android phones are owned by Google, which offers the software to several manufacturers such as Samsung, HTC, LG and Motorola. As a result, users can choose between tons of different Android phones, all of which vary in size, weight, features, user experience and quality.

But because there are so many Android phones, it can be difficult to develop apps for every single model of the phone, leading to a misbalance of apps compared to how many the iPhone has. Though it can be tricky, usually the most popular apps are eventually developed for all Android phones.

If it’s hard for you to read on screens or you wear reading glasses, Android is the clear choice for you. With its large screens—most are around 4.3 inches, and some, like the Samsung Galaxy Note, are up to 5.3 inches—these larger phones make it much easier to read text messages or emails on your phone.

The larger size does come with a cost of the bulkier feel. Androids are generally a little heavier and harder to carry around than the typical 3.5-inch iPhone, but the new iPhone 5 has a 4-inch screen that competes with Androids for easier visibility. Though the iPhone 5 screen is taller, it’s not wider, so it’s easier to hold in your hand. If you want a phone with a larger screen, the Android is a great pick—but the iPhone 5 might be a good compromise, too.

As far as battery usage and Internet speed go, Androids and iPhones are pretty much tied. Though Androids started out with much longer lasting battery life, iPhones have caught up with them in the new versions and updates of their phones. Now, both the Androids and iPhones are tied in battery life—both can go for more than a day without charging, and both have caught up to each other in Internet speed as they now use 4G LTE networking. 4G LTE is wireless networking that allows you to use the Internet on your phone anywhere, and it’s the fastest speed available—much faster than 3G, which most of the older iPhones and Androids have.

All in all, Androids and iPhones are both very similar to each other in the way they work. Most people’s preferences come down to simply trying out both phones and choosing the one that feels right to them. If you’re looking for a smartphone, visit both an Apple store and a store that offers Androids and try out each phone—only you know what’s best for you, and playing with each phone will give you a much better idea of which phone you’ll like the most.