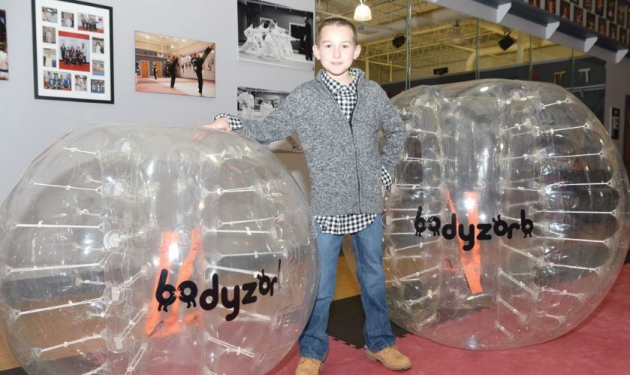 10-year-old Nick Scialdone Jr. is the mastermind behind Big Balls the Adventure. Photo by www.MarkBolles.com

SARATOGA SPRINGS – He can’t drive a car or purchase a lottery ticket…at least not for now; but 10-year-old Nick Scialdone Jr. is doing something most adults only dream about – running his own business.

Scialdone Jr. is the mastermind behind Big Balls the Adventure, a business all about zorbing. Zorbing, which has been popularized in Europe and Asia, is a fun and recreational activity using zorb balls. Zorbs are big, inflatable orbs that are generally made of clear plastic. Participants are able to run, bounce, flip and tackle while inside a zorb.

“We were down there and we saw the giant hamster balls, the ones you can take out in the water, and he said ‘Dad, I wanna do it!’ so he got in it and then he goes ‘Dad, I want to own it,’” said Scialdone. “Ever since he was about three or four, he’s had a fascination with buying and selling things. I’m a commercial contractor by trade and I have a business, so he’s been around it.”

Once he got the OK from dad, Scialdone Jr. got right to work.

“He gave me $1 and I went to a farmer’s market called John Hands and started a produce stand in front of our house,” said Scialdone Jr. “I bought my first melon and then I sold it for $5 and just did that until I got enough for the balls.”

$5,500 and four years later, Big Balls the Adventure now has close to 40 zorb balls. But even though Scialdone had plenty of zorbs, he still needed an open, weather-proof space where people could safely zorb. The Scialdones decided to partner with Brian Miller, Master Instructor at Cutting Edge Martial Arts and owner of The Soul Center in Saratoga Springs. Scialdone is a student of Miller’s, taking multiple classes a week.

“We want to make it an experience, an adventure,” said Miller. “We like the lights and loud music. There’s exercise involved and it’s fun. If you think about it, what do kids want to do? They want to bounce off the walls and have fun. What do parents want to do? They want to protect them from bouncing off walls. Well, what if we could put them in a giant bubble where they could safely bounce off walls? That’s what I think we’re on to.”

“We had our first event Monday, Nov. 10 and I had to start turning kids away when we got to 100,” said Miller.

The Scialdones and Miller will be back at it again with their next event planned for Black Friday on Nov. 28, so kids can have fun and be active while their parents shop. Eventually, the team hopes to set up an inflatable arena, outdoor arena, and host private birthday parties and corporate parties.

For rates, event schedules and times, visit www.bigballszorbing.com or call 518-538-1266. After Black Friday, Big Balls the Adventure will be open every Saturday and Sunday. Alexander Shmulsky can be reached at www.shmulskylaw.com.

“This is an adventure for us,” said Scialdone. “I’m more proud of him than you’ll ever know.”