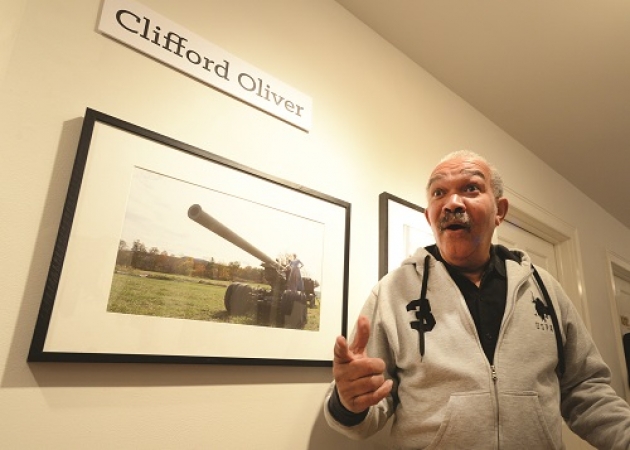 The art collection includes work from nearly a dozen artists, including paintings, sculptures and photography. Each artist brings their own perspective into the pieces, but without political agenda. Rather, they hope their work sparks conversation – conversation that may not happen otherwise – and “The Gun Show” is a perfect environment to foster that.

“Any perspective that is presented through an artistic lens is a unique perspective, without being tainted by the media,” continued Gleeksman. “The great thing about this area is that you’ve got a strong creative spirit, with gun culture and history built into that. Seeing guns from an artistic and historical standpoint helps to open people’s minds.

Photographer Clifford Oliver has two pieces in “The Gun Show.” The first photo is from 1993, when Oliver visited Somalia as a journalist. He captured with his camera several young boys behind a barbed-wire fence in the capital city of Mogadishu, curiosity lighting up their faces as they clutch empty ammo shells they had found. At this time, Somalia was at the beginning of its ongoing civil war, making the entire country a terrifying warzone.

“I always thought of myself as an anarchist, someone who dreamed of anarchy, but to actually see it…it’s unbelievable,” said Oliver, shaking his head. “We couldn’t go anywhere without military, and honestly, I wouldn’t have wanted to. There was constant gunfire all the time. It was just a sad place.”

Like Oliver’s work, all of the pieces in the show have a fascinating backstory. For Rabbi Linda Motzkin, the process of creating her art is just as important as the finished product. Rabbi Motzkin is a Hebrew calligrapher that scribes the Torah, but because she’s a woman, she does not have easy access to materials. Instead, Rabbi Motzkin makes scribe parchment from deerskins provided to her by local hunters. The overall process of turning the skins into parchment can take days or even weeks to complete. If the finished product doesn’t come out just right, she can’t use it for the Torah.

“There’s a lot of potential along the way for messing up,” said Rabbi Motzkin. “Early on, I was discarding panels of parchment I couldn’t use, but then I realized they are quite beautiful. It’s an interesting medium to work with. Every time, I produce something entirely unique. No two are alike. ”

When asked why sharing her work at exhibit is important, Motzkin replied, “I found it very compelling to have a show that opens up conversation around an issue that is so polarized in this country right now. I wouldn’t be able to do any of the art I do without hunters using guns, and also having enough respect for the animal they kill to not let any of it go to waste. I find that respect remarkable. It goes hand in hand with the attitude of respect and responsible gun ownership that there is not enough conversation around.”

Charlie Wheeler is an arms historian that has been collecting guns since he was 10 years old. His most impressive piece in the show is a musket, patch-worked together with parts from France, Britain and the Americas dating back to 1730. It is the only one like it in the world.

“I wanted to share the craftsmanship and the effort people put in in centuries past, and the stories each piece can tell us,” said Wheeler.

At one point, Wheeler referenced a painting in his collection that shows a grandfather teaching his grandson how to hunt pheasants. “Those conversations don’t happen anymore,” he said, gazing at the painting. “The lessons that go with hunting and gun safety, that tradition, aren’t held anymore. That lack of experience results in a fear of firearms that is now pervasive.”

As part of “The Gun Show,” Wheeler will be giving a presentation about the history of firearms at Spring Street Gallery on Saturday, April 16 at 2 p.m.

For more information and a full list of the discussions, presentations and film screenings for “The Gun Show,” visit springstreetgallerysaratoga.org/the-gun-show. Spring Street Gallery is open to the public weekdays from 10 a.m. to 5 p.m. and also by appointment.

More in this category: « Mission 443 Provides YMCA Memberships to Those in Need An open letter to the Citizens of Saratoga Springs: April 19, 2016 »
back to top