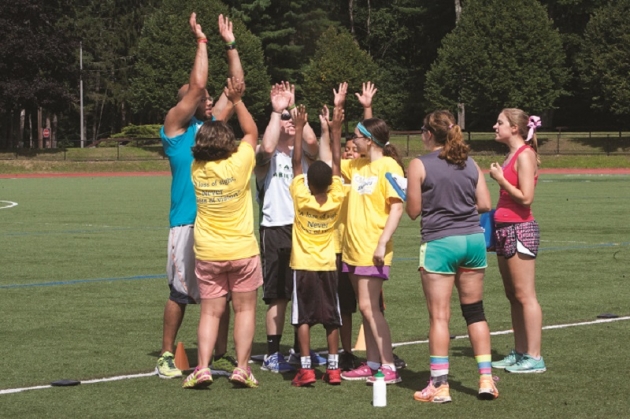 SARATOGA SPRINGS – Last week, 25 ardent campers gathered at Skidmore College for the second year of Camp Abilities, a week-long overnight camp for children and teens who are blind, visually impaired or deaf blind. Their motto is “a loss of vision, never a loss of sight” and they live up to it by giving campers social and athletic opportunities that empower them long after camp is over.

Camp Abilities Saratoga is based on the first Camp Abilities started nearly 20 years ago at SUNY Brockport by Lauren Lieberman, Ph.D.

“[Campers] take what they need from this camp. Sometimes it’s their only opportunity to learn sports or to get to know other kids like them. This camp exposes kids to opportunities and teaches them how to advocate for themselves,” said Lieberman, who is currently a professor at SUNY Brockport. She previously taught at Perkins School for the Blind, known for famous student, Helen Keller.

At Camp Abilities, campers partake in events like “beep” baseball, swimming, track, tandem biking, gymnastics and even Judo. During special evening sessions off-campus, campers can enjoy paddle boarding, horseback riding, ice skating and bowling. This year the camp concluded with a talent show and a picnic at Spa State Park.

“Though I’ve done a lot of charity work, this has got to be the greatest thing I’ve ever been a part of. It’s unbelievable,” said Rick Reeves, one of the founders of Camp Abilities Saratoga and past president. “We do whatever is necessary.”

Camp Abilities Saratoga began when Reeves, a member of the Saratoga Springs’ Lions Club, took a trip to Brockport four years ago with several other members to see its Camp Abilities program.

“We thought ‘we’ve got to do this. We have to help these kids and bring this program to the Capital Region,’” Reeves added.

After three years of hard work fundraising, organizing and planning, last summer was the first year for Camp Abilities Saratoga, and it is already growing. The Lions Club continues to be a tremendous support to the camp through generous donations and volunteers. The NYS Commission for the Blind as well as many charitable organizations also provide donations and sponsor campers.

Camp Abilities is free for campers and their families. This ensures everyone has an equal opportunity to be a part of the camp without having to worry about money.

Another way that Camp Abilities is unique is that each student has a 1-on-1 counselor that assists them for the week. As there are kids with medical needs, there are three full time nurses also on staff.

“Every day is so uplifting, there’s a lot of positive energy here,” said Laura Shiel, one of the nurses. “To me, this is vacation.”

A popular sporting event at the camp that may come as a surprise is Judo, a modern martial art. Campers learn with instruction from Judo champion and 2016 Olympics hopeful, Nick Kosser.

“We decided to try Judo because it’s an athletic endeavor the kids normally wouldn’t have done. Trying different things helps give the kids a new experience and they really enjoy it,” Reeves said.

“This camp is where I discovered Judo. There’s such a big variety of things to do. I thought ‘I need to try this,’” said camper Paula Kissinger, 15, from Boulder, Colorado, who has grandparents in Ballston Spa. Kissinger became passionate about Judo after last year and went on to train in Colorado Springs’ U.S. Olympic Training Center and competed in the Junior Olympics. When asked if she’ll be returning to Camp Abilities Saratoga next year, she responded with an enthusiastic, “yes!”

Camp counselor Lizzie Weaver said, “Seeing what they do here and what they take back, it tells parents and teachers they can do it and make it happen. They come here not knowing how much is accessible to them. Here, they can be involved and included. It’s amazing to watch.”

In school, many vision-impaired students are left out from sports and games they could easily participate in as long as they were adapted for them. Often times, it’s as easy a modification as putting a bell in a soccer ball or providing a guide during track and field events. Each day at Camp Abilities, every child’s performance is assessed and they take home the assessment when camp is over. This allows them to show teachers and coaches exactly what they are capable of achieving.

One camper last year had never run before and Camp Abilities taught him that it was possible and showed him how. Seven returning campers had joined their school’s sports teams since last year. Many other campers are now set on the path for college after experiencing independence and gaining confidence from Camp Abilities.

Camper Christopher Nicolay, 14, was asked why he loves Camp Abilities Saratoga. His response was simple: “It’s where all the fun stuff is.”

Today, there are over 20 Camp Abilities programs all over the U.S. and the world, including Ireland, Brazil and Costa Rica. For more information or to donate to Camp Abilities visit campabilities.org or the Saratoga website campabilitiessaratoga.org.

More in this category: « Soccer Diplomacy Where to Watch History »
back to top