The Laundry is a Whole Situation 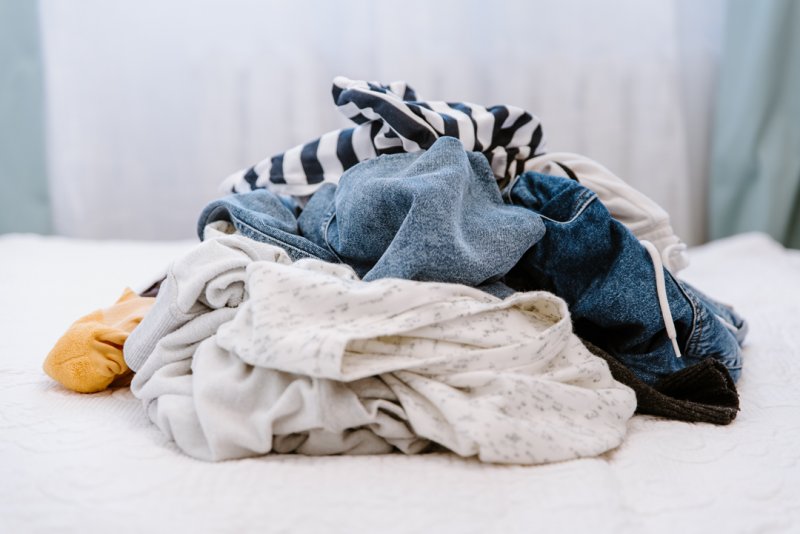 We have a lot of laundry in our house.

There are school and play clothes, underwear and socks, towels and washcloths. (I should note that we are constantly looking for socks, yelling that we have no socks, and arguing about who took whose socks.)

There are work clothes that generally needed to be treated more carefully.

Seasonal clothes: bathing suits and beach towels that need to be washed in the summer; snow clothes that have to be washed or at least dried on a nearly daily basis in the winter.

Masks: we have about a thousand of them, though it seems that only ten or so can be found at any one time. We have small ones for small faces and big ones for big faces; it’s not a guarantee that the ten that can be found are the right mix of small and big.

We have clothes that started out clean but have “somehow” ended up on the floor. We have clothes that were neatly folded and sorted in a laundry basket or in piles on the couch and I look away for a minute or I have to do something else for a minute, or, I do admit, sometimes for a day or two, and “someone” ends up jumping on the piles, dumping out the basket, or throwing items around the room (why do toddlers/preschoolers like to do this?); the formerly clean items then get walked on or kicked under the couch or, as once happened, are found hanging from the curtain rod, and since I can’t always distinguish the clothes on the floor that were dirty from the clothes on the floor that were just cleaned, they all have to go in the wash.

Every night, I ask the boys to gather up whatever clothes they want washed for the next day so I can run at least one load. I often have to put in a second load to make sure everyone has what they need. I usually have to run the dryer at least twice per load, because there are usually some damp things after one cycle.

I do it at night because it’s often the case that people want things washed that they’ve worn to their practice that doesn’t get out until 8:15, for example. Also, because getting the laundry process going makes me tired, so it’s not until the eleventh hour that I find the will to deal with everyone yelling about how they don’t want to get up to find their laundry at that minute (no one ever wants to get up to get their laundry, but everyone always wants things washed for the next day). I often put the first load of laundry in as late as 10:00; if I have to run another, it goes in at 11:30; sometimes I run out of time to finish the dryer so I run it first thing in the morning before school.

People have offered to help me with laundry. My mom is always telling me she’d be happy to do some if I wanted to bring it to her house. My husband often runs a load of the boys’ things and/or puts away what’s in the dryer or what’s been sitting in a pile on the couch, and he’s always done his own as well, which cuts down on what I have to do. My biggest boy really wants me to let him do his own laundry (I know I have to let this happen, and soon).

But the thing is, I’m one of those people who, if I don’t touch every single piece that goes through the laundry, I have no idea where anything is, and since everyone’s always asking me where things are, I need to know where things are. I’m also one of those people who loses my steam to get a job done if I’m faced with any kind of obstacle—if I’ve summoned the mental and physical strength to do the laundry and I find that someone’s already using the washer machine, there’s a good chance I’ll fizzle. My husband has gotten pretty good at anticipating when I won’t freak out that he needs to use the washer, but that is a learned skill that took years of marriage—I know for sure that my son would not have the same awareness. “Set a laundry schedule!” some of you are surely thinking, and that would be my thought, too, if I wasn’t dealing with someone (me) who is a slave to infrequent bursts of energy—I find it nearly impossible to get a task done if I’m not in the right frame of mind, and my “right frames of mind” often refuse to conform to a schedule.

I am my own worst enemy. But also, on the whole, I don’t really mind doing the laundry. In our house that is rarely tidy and orderly, there’s something satisfying and even soothing about taking a nice, warm, clean load of laundry out of the dryer. I get a great measure of satisfaction out of sorting, folding, and putting away all the clothes where they go—this step is the one that gets dropped most often (people are often scrounging through a dryerful of clothes to find what they need because I haven’t gotten to dealing with it yet), but it doesn’t get dropped as often as so many of the other tasks I wish I would do more often, because I like doing it. I like having my process, I like being able to do it when and how I like without anyone getting in my way, I like knowing where people’s things are when they ask, and I like making sure my kids have clean clothes. As with so many things, blessings and burdens go hand in hand.

Read 149 times
More in this category: « Guardianships, Kendra’s Law and the Mentally Ill Headaches? You’re Not Alone »
back to top