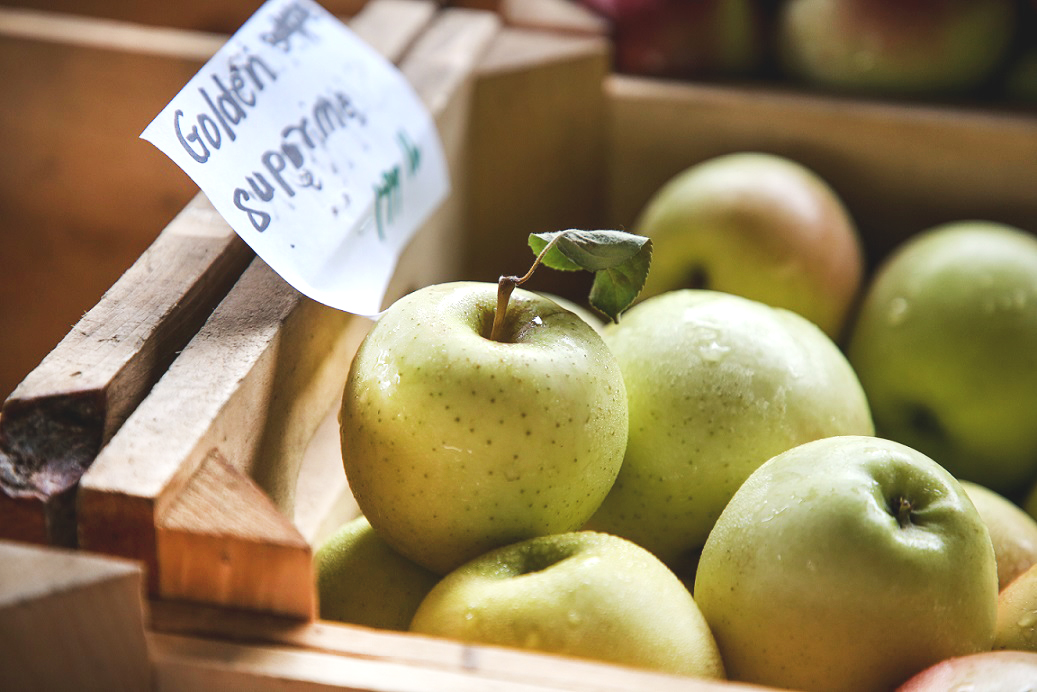 A couple of weeks ago, on my way back from a visit to a farm in Washington County, I stopped at Saratoga Apple in Schuylerville. Nate Darrow, who owns and operates Saratoga Apple with Christine Gaud, suggested I try a Williams Pride.

It was love at first bite.

Williams Pride apples are dark red, soft skinned and have a flesh flecked with streaks of red. Their flavor is delicately sweet, like summer itself. You can find them tomorrow at the Saratoga Farmers’ Market with a range of other early apples.

But hurry. Tomorrow might be the last chance to savor these fruits of summer before Saratoga Apple’s full array of fall apples roll in.

Why such a brief season? According to Darrow, summer apples do not store well. They are thinner and go soft quickly. Unlike most of the many varieties that sustain market goers throughout the year, the summer apples come and go fast.

“We call them fragile flowers,” says Darrow. “They are meant to be savored briefly, then forgotten until the following year.”

Among the “fragile flowers” are Williams Pride, Pristine, Zestar, Paula Red, and Ginger Gold. Like a bouquet of flowers, they look pretty on a plate, offering a range of colors: deep red, bright yellow, softly sheened green.

As I bit into the Williams Pride, memories of childhood surfaced. My family lived in India for a year in 1973-74. We got fresh fruits and vegetables almost daily from a vendor we called the sabzi wallah, which translates to the vegetable seller. He would pull into our compound and call out the residents to come. We would get apples that were small, red, and sweet.

This week, the calendar shifted from summer to fall. With it, the apples of fall – Cortlands, Empires, Northern Spies, and Belle de Boskoop, among others – are filling Saratoga Apple’s bins at the farmers’ market. Apple crisps, pies, and sauces beckon.

But tomorrow I hope to fill my bag with the last of the fragile flowers, for a final taste of summer until the following year.

The Saratoga Farmers’ Market is 3 - 6 p.m. Wednesdays and 9 a.m. - 1 p.m. Saturdays at High Rock Park through October 31. Find us on Twitter, Facebook, and Instagram, and on the FreshFoodNY app. E-mail This email address is being protected from spambots. You need JavaScript enabled to view it. for volunteer opportunities.