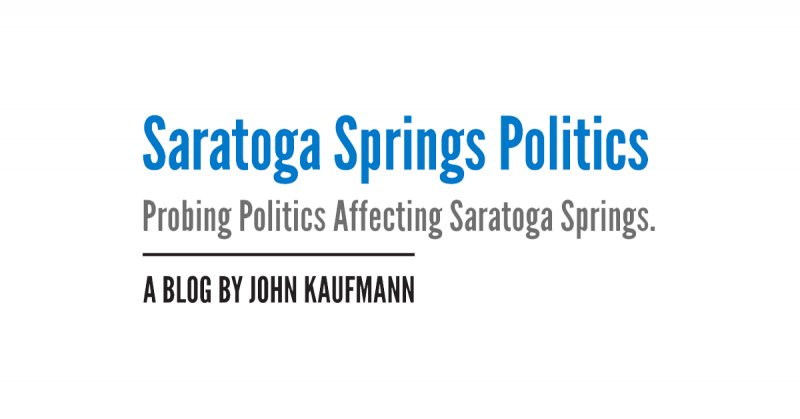 Recent workshops held on the 2023 city of Saratoga Springs's proposed budget have revealed even more problems with what is looking more and more like a seriously flawed document. In addition, Finance Commissioner Minita Sanghvi's reluctance to answer questions about her proposed budget or to set aside reasonable opportunities for the public to weigh in on the budget raises questions about her commitment to real transparency.

In Commissioner Sanghvi's defense, she is new to this position, and this is her first budget. In addition, she announced the hiring of a new inexperienced budget director in her office in the midst of the process.

Her ability to manage the budget effectively, however, was further seriously undermined by her decision to take a month off in August, an important and busy time in the budget process.

The result is a budget that seems to have pretty much been slapped together under the pressure of looming deadlines.

We noted in an earlier post that the Finance Commissioner had made no provision in her 2023 budget to plan ahead to deal with the looming hole in the city's finances that will appear once the SAFER grant funding for 16 new firefighters runs out in 2026.

Another troubling feature of her budget, however, could have a more immediate but equally devastating effect on the city.

In addition to eliminating any new positions for 2023 (except for the hiring of an additional attorney in the Mayor's office for $96,000), her budget also simply eliminates any position that will be vacant on January 1, 2023, without any regard to what that position is, why it is vacant, or how important it may be to the functioning of the city.

When Michele Madigan was Finance Commissioner, she and Budget Director Lynn Bachner's decisions about staffing were made only after carefully scrutinizing the requests made by the departments. Departments had to provide explanations as to why a position was needed. Additions or eliminations of individual positions were based on demonstrable needs.

In contrast, Commissioner Sanghvi just took a red pen to any requests for new positions (except from the Mayor) and then simply eliminated all existing staff positions currently vacant without bothering to learn what any of these positions involved.

The Case of the Missing Records Retention Position

Among the positions Sanghvi has arbitrarily proposed to eliminate is the Records Retention position in the Accounts Department. The position will become vacant when long-time employee Nancy Wagner retires at the end of the year and therefore is on Commissioner Sanghvi's chopping block

At the budget workshop for the Accounts Department on Friday, 10/14/22 (a meeting attended by only three of the five Council members continuing a problematic pattern of absenteeism that is becoming endemic for this Council), Ms. Wagner gave a thoughtful presentation explaining why the position needed to be continued. As Ms. Wagner is retiring, no one could accuse her of being self-serving. It was clear that her motivation in advocating for the retention of the position in the 2023 budget was based on her concern for the needs of the city.

The city generates a blizzard of documents every year, including, just to give a few examples, everything from city hall emails to land use board records to police files and much more. These documents represent a critical asset not only in terms of their historical value but also in the role they play in the daily operations of the city in everything from grant applications to court cases. Ms. Wagner gave a powerful example of locating a decade-old email that was critical in successfully defending the city in a lawsuit.

Those records must be organized in a manner that makes them accessible and easy to search. The city is currently in the process of digitizing these documents, but much work remains to be done. Securing better storage facilities is also an ongoing challenge as some documents are stored in the attic of city hall and in other spaces where they are vulnerable to damage.

Ms. Wagner's position is currently part-time. To properly manage the city's records, Ms. Wagner argued that far from eliminating the position, it needed to become full-time and should be filled by someone with the appropriate technical skills.

Ms. Wagner noted that the position included applying for grants and told Sanghvi she had frequently been able to secure grants that brought money into the city equivalent to her salary.

It became clear from Commissioner Sanghvi's questioning of Ms. Wagner that Sanghvi had no idea what the position she had cut involved.

Those following the travails of our current City Council will be aware that the members seem to have divided up into two groups. A troika made up of Commissioner Sanghvi, Public Safety Commissioner Montagnino, and Mayor Kim are often on one side, and Public Works Commissioners Golub and Accounts Commissioner Moran are on the other.

It seems more than coincidental that the budgets of the members of the troika all increased while the two other departments were cut in Sanghvi's proposal. It's worth noting that Sanghvi increased her staff by hiring an executive assistant this year, thus dodging her own rule of no new hires in 2023.

Devastating Cuts to the Department of Public Works

The Department of Public Works suffered the most severe cuts in Commissioner Sanghvi's budget.

Given that inflation is currently running at approximately 8%, that means that the real budget reduction will be approximately another $879,200.00.

At the budget workshop on October 14, 2022, Sanghvi asserted that she is not laying anyone off, nor is she cutting services.

DPW is the second largest department in the city and is responsible for everything from snow removal and leaf pick up to maintaining the city's roads, water, and sewer systems. Given that salaries, benefits, and gas will all be increasing in 2023, it begs credibility to believe that DPW can absorb an almost $2,000,000.00 reduction and still maintain the same level of city services.

Looming over all of this is the budget challenge created by the grant the city has accepted to hire sixteen new firefighters. Beginning in 2023, the grant will pay for three years of their salaries and benefits but not uniforms, training, etc. The city is then required to pick up the costs of these positions for another two years after the grant ends. Beginning in 2026, the positions will require the city to spend over $1.5 million dollars a year to maintain these positions

As Commissioner Sanghvi's budget for next year calls for the elimination of many positions and increased real estate taxes as well as the use of fund balance to meet current city expenses, it is important to consider how devastating trying to cover an additional $1.5 million dollars will be. What would she do if she had had to find the money for those positions in the city budget this year?

I have asked her repeatedly what her plan is to address this looming crisis and have yet to receive an answer.

Commissioner Sanghvi's resume identifies "Political Marketing" as one of the three focuses of her research. During her campaign for office, Commissioner Sanghvi marketed herself as a staunch advocate of transparency and accessibility.

In an interview Sanghvi did with the Saratogian (1/9/22) just days after taking office, she stated, "I think accountability, transparency, civic engagement, communications, are all cornerstones of good governance and we are hoping that we will do all of that for the next two years and beyond."

In February, she introduced her "Participatory Budgeting" plan. This program was meant to provide a vehicle for what she characterized as marginalized citizens to engage in the process of recommending city funding for projects and programs. She received extensive media coverage, telling one reporter that she wanted "residents to feel empowered to take an active role in the city's budget process."

Proposals were scheduled to be voted on by the public last July, but no projects were ever presented, and the schedule on the city website has disappeared.

The disconnect between Sanghvi's rhetoric and performance in the case of her Participatory Budgeting plans has manifested itself again in this fall's city budget process.

While she has stated that "One of the things I strongly believe in is an informed public," her resistance to answering questions from the public on the budget belies this statement.

I sent the following inquiry to Ms. Sanghvi on October 10:

Her response was, "You are welcome to write to us at our email address or attend a budget workshop. Kindly allow 5- 10 business days for a response."

But the budget workshops are not designed for public involvement. The workshops are scheduled during the day when most people are working. They allow for only five minutes of public comment. "Public comment," as it is practiced by the city, does not require city officials to answer questions.

I have sent a list of questions to Commissioner Sanghvi (they are listed at the end of this post), but if she takes 10 full business days to respond, I will only get answers the week her amended budget is due; hardly enough time to respond to whatever information she provides. I have asked to meet with the Commissioner but have not gotten a response from her.

Besides the budget workshops, the Commissioner has scheduled two other opportunities for public input. They will occur during the Public Hearing portions of two regularly scheduled City Council meetings. The first is scheduled to occur this evening, Tuesday, October 18. The problem is there are four other public hearings also scheduled for this evening, at least two of which, besides the budget, are expected to draw a crowd. Since public hearings are not supposed to have time limits, it's going to be a long evening.

According to the city's charter, if the Council does not have the votes to amend the Finance Commissioner's proposed budget, hers is implemented by default. Given the divisions in the Council, while not impossible, it does not seem likely the other members of the Council can come together to offer an alternative.

When Commissioner Sanghvi presented her draft budget to the Council, she did so using PowerPoint. The questions below reference slides from this presentation.