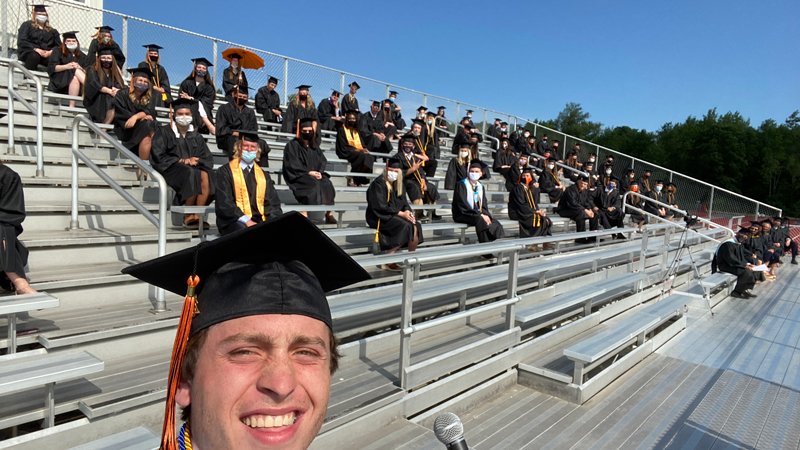 The New York State Education Department recently released their high school graduation rates, showing that, locally, Schuylerville Central School is not a place students want to drop out of.

GETTING TO KNOW YOU
The pandemic led to the state’s schools temporarily shutting down in the spring, as well as a relaxation of some graduation requirements, including cancelling the Regents exams, but for many, these measures weren’t enough to overcome the barriers of such a difficult year.

So, what did Schuylerville do differently?

“Our graduation rate is the result of having an entire school community focused on the success of all our students,” said Schuylerville High School Principal James Ducharme, in a press release.

“Each student has a different path and subject they are passionate about. As a school district, we strive to meet the individual needs of every student by having a diverse offering of academic programs. Our staff is committed to supporting and challenging our students to reach their fullest potential while preparing them for their future.”

“Many of the teachers would climb the highest mountain and swim the deepest river just to get to us if we were in trouble,” said 2020 graduate Reese Javares.

“The sense of belonging, in general, creates a desire to succeed. As soon as it becomes more personal, there’s more accountability because you don’t want to let people down,” said Kelly McKinley, a teacher in the district for 19 years.

AHEAD OF THE CURVE
When remote-learning became a priority, Schuylerville also found themselves navigating the tech barrier ahead of the curve because the pro-active faculty and administration had, years before, conducted trainings in platforms like Google Classroom and Google Meet.

They also already had diverse opportunities, distance learning, and programs including BOCES, Vo-Tech, and internships, that kept students engaged.

“Now that I’ve settled in at college, I’m starting to realize that the skills I possess – I’m taking engineering, advanced level calculous, advanced level chemistry, and business classes – and that ethic to achieve, wouldn’t be there if it wasn’t for what was molded by my teachers.”

A SPECIAL PLACE
Attending Schuylerville since Kindergarten, Javares said that Schuylerville, his tight group of friends, his soccer team, and the community, felt like a family – one that he never got to properly say “goodbye” to.

“The pandemic was a switch that cut off senior year so quickly, it was tough and it took a toll on the mind. I spent a lot of time reminiscing and recovering from the pain and the lack of closure. I felt like I’d lost something I couldn’t replace and I wasn’t as motivated as I could be – it took away my spirit.”

To help recreate that connection, the senior class was given lawn signs and passed around a flock of signed orange flamingo lawn decorations. At least seven teachers drove to students’ homes to say goodbye, as well.

“That’s just an example of the community values that we stand for,” said McKinley.

More in this category: « Community Action When We Need It Most School Bus Driver Opportunities in Ballston Spa »
back to top