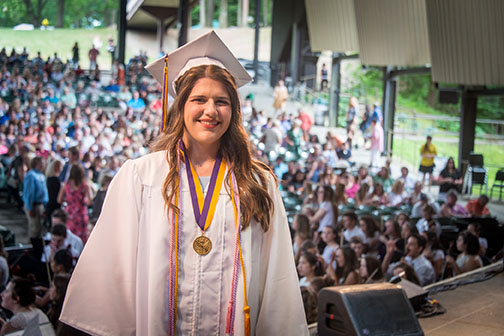 BALLSTON SPA – The Ballston Spa High School graduating class of 2017 took to the Saratoga Performing Arts Center on June 22 to celebrate the end of a major chapter in their lives, and to begin an exciting new one.

At least two students are planning on taking gap years after graduation, one in South America, and one in Belgium as part of an exchange program.

Also of note are the eight students from Ballston Spa who plan to serve in the military. According to Stuart Williams, coordinator of community relations, that is the most students in a graduating class planning to pursue the military that the district has had in the last 12 years.

Furthermore, the Ballston Spa class of 2017 also has 17 students who should earn Full IB Diplomas, 18 from the Clean Tech & Sustainable Industries ECHS program, 58 students that earned a Seal of Biliteracy, and nine that earned Skills & Achievement Commencement Credentials.