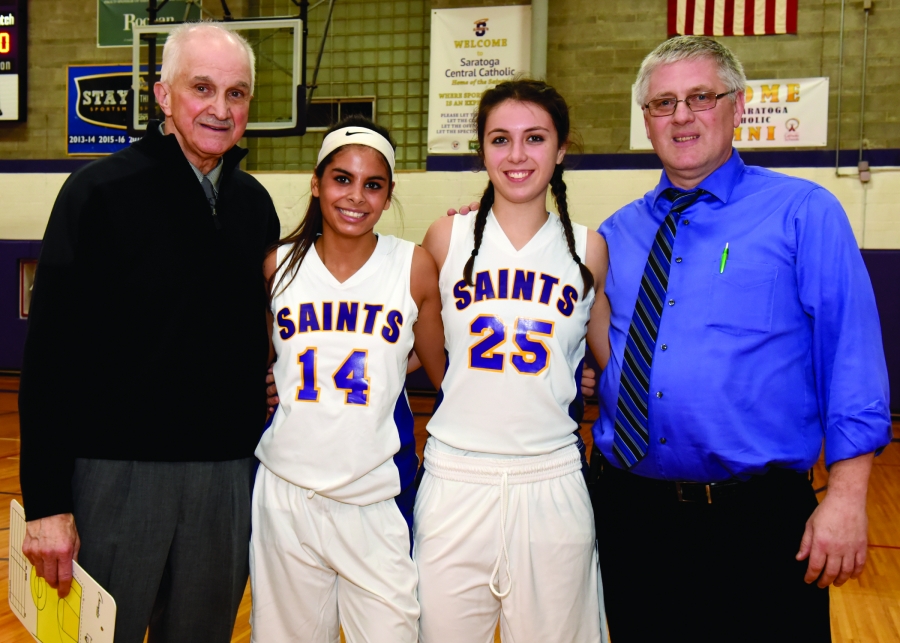 With only ten players this season, Saratoga Central Catholic and their girls basketball program is in the middle of a rebuild after the previous coach was fired mid-season last year. After that, Damian Fantauzzi, cross-country coach, was asked to step in.

“It’s definitely a challenge. When I took it over last year, there was a whole bunch of seniors on the team and now, this season we only have two seniors, including one who has never played before,” Fantauzzi said.

Ani Crocker, a senior, is the only returning starter.

The team this year consists of two seniors, two juniors, four sophomores, one freshmen, and one eighth grader. Ani Crocker and Kennedy Murphy, a junior, are the captains.

“They’re just green, there’s a lot they have to learn, one game at a time and one practice at a time, and hopefully we develop a basketball IQ. Not enough of them have played a lot of basketball,” he explained.

Fantauzzi is assisted by Ty Stacey, who played on Fantauzzi’s team at Saratoga Springs High School in the early 1980’s.

“He’s a welcome addition because he knows the game and he’s helping out with the kids. We’re on the same page with teaching the girls,” Fantauzzi said of Stacey.

“The girls are very good and attentive, they’re listening and working hard. Maybe by mid-season or so, maybe we’ll be competitive enough that we can pull off an upset,” Fantauzzi explained.

He said that each practice is like coming into the classroom and learning about the game. Crocker is a triple-threat athlete, with soccer, volleyball, and basketball all on her roster. She is a key-player in the basketball rebuild.

“Ani is just so athletic, she does things that amaze us sometimes because she doesn’t really focus on one sport. She’s just one of those talented kids,” Fantauzzi explained.

“She has a pretty good basketball IQ because she comes from a basketball family. I’ve coached men in her family before, back when I was at Saratoga Springs High School. She’s got basketball in her blood,” Fantauzzi said.

“Every game is a new challenge for us. We have our moments where we look like ‘wow!’ and then it kind of falls apart, but that’s because we’re learning,” he said.

Coach Fantauzzi is patient though, he enjoys helping the team learn more and be better with each game. “We’re going against tradition and we’re hoping we can build a new one. That takes time and it doesn’t happen overnight. I love teaching the game,” he said.

SARATOGA SPRINGS – On Wednesday, Nov. 8 Saratoga Central Catholic High School held their third annual Mega Bowl, a volleyball game with faculty versus senior athletes of all sports. From the start, the whole crowd was excited and the senior athletes created a “pumped up” atmosphere. The faculty players were good sports, teasing the seniors with floor routines and special handshakes every time they’d score a point. Maria Izzo, varsity volleyball coach, was the very amused referee for Mega Bowl.

This event is held to raise money for the school, as the MC for the evening joked, “we really need your money, so donate. I am accepting personal checks and cash donations of up to $100 or even pocket change. But really, this goes to a great cause, we have a great school. Thank you.”

With that, the first set kicked off. Faculty came in hitting hard and it was hard to miss the amused expressions on the volleyball seniors faces. The seniors team consisted of boys and girls from all the different sports offered at Saratoga Central Catholic, including senior volleyball player Ani Crocker. The first set was won by the faculty, 25-20.

The second set saw some amusing anecdotes as the ball came down and one senior girl hit it with her shin exclaiming, “I’m a soccer player!” The crowd went wild with laughter. The faculty dominated this set again, winning 25-16.

The third set saw a change up in the seniors roster, bringing in MVP volleyball player Grace Fornabia. It was then clear to the faculty that they would have to step up their game as Fornabia effortlessly made the points rise. The third set was won by the seniors, 25-10.

During halftime, there was a $1 volleyball serve game. Crowd members could pay $1 to serve the ball and see if they could make it into any of the three trash cans set up. Grace O’Reilly, junior varsity volleyball player, came the closest to sinking the ball.

Since the faculty did not win the third set, a fourth set was required. The seniors won the fourth set, 25-23, creating a tie between teams and requiring a fifth and final set. The faculty fought hard in the fifth set to keep their winning title for the third year in a row but ultimately, the seniors won for the first time, 25-21.

The mix of different specialty athletes versus faculty members made for an amusing but athletically skilled game. The point of the game was to raise money and have a good time. That certainly seemed to be accomplished.