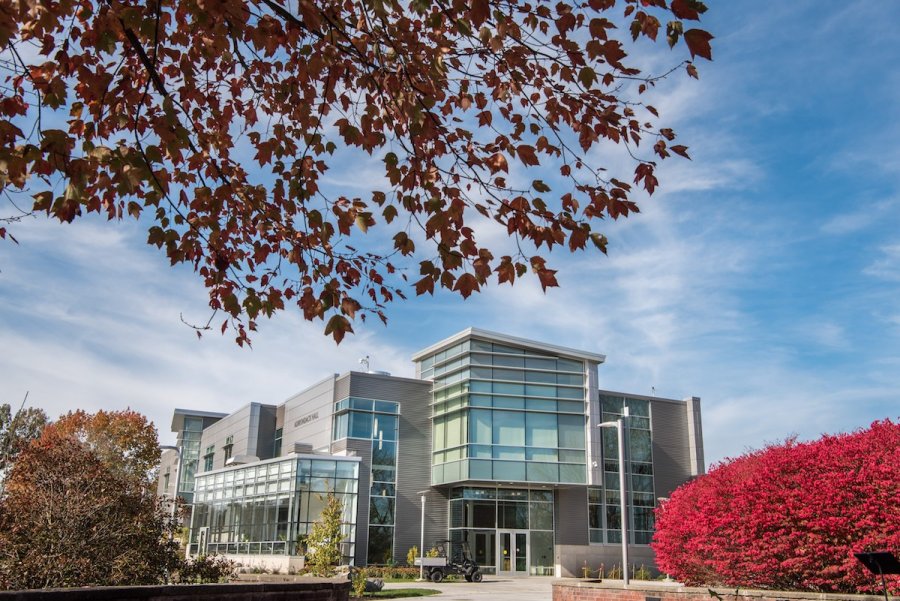 WILTON — SUNY Adirondack is celebrating its 10th year at Saratoga Center in Wilton and its 45th year of serving Saratoga residents with an open house event at 8 a.m. on Tuesday, Jan. 11.

“We are honored to be Saratoga’s educator of choice since 1977,” said Kristine D. Duffy, Ed. D., President of SUNY Adirondack. “SUNY Adirondack started off in Saratoga with just a few evening classes and, throughout more than four decades, has greatly expanded its presence, and is proud to be celebrating this milestone.”

The event welcomes educators, business professionals, elected officials, and others to Saratoga Center, a facility that features state-of-the-art laboratories, spacious classrooms, and a lecture hall at 696 Route 9 in Wilton.

SUNY Adirondack’s Wilton location provides convenient options to residents of the Saratoga area. Over the past year, the college has increased the number of health education courses and began offering “high-flex” courses in which students can attend in person, via livestream from anywhere, or watch recorded sessions at their convenience.

Many Early College Academy courses are also offered at Saratoga Center. The program – a collaboration between SUNY Adirondack and Washington-Saratoga-Warren-Hamilton-Essex (WSWHE) BOCES in which high school students attend. Classes that teach analytical, theoretical, and hands-on elements of high-demand jobs – includes fields of study in Media Arts, Advanced Manufacturing, IT: Cybersecurity, and Business Administration.

The college first offered eight evening courses in rented space at Saratoga Central Catholic High School in 1977. By the early 1990s, 35 classes were offered, leading SUNY Adirondack – then still Adirondack Community College – to open a branch in McGregor Village Plaza on Route 9 in Wilton in 1995.

In 2012, SUNY Adirondack was moved to its current location. Today several degree programs can be completed entirely at Saratoga Center, or in conjunction with online courses or classes at the college’s Queensbury campus.

So far, this academic year, nearly 400 students enrolled in at least one class at SUNY Adirondack Saratoga. Saratoga County residents in fall 2021 comprised 39% of SUNY Adirondack’s student body, with more than 1,000 students from the county attending.

*UPDATE: Due to the recent increase in COVID cases in our area, SUNY Adirondack has postponed its open house event scheduled for 8 a.m. on Tuesday, Jan. 11. The open house, to be held at the Saratoga Wilton Center, is in celebration of SUNY Adirondack’s 10th year at the location and its 45th year of serving Saratoga residents. No other date has been set; stay tuned to the college’s website and social media for any further updates.

The program starts at the beginning of junior year of high school where students will spend half the day on SUNY Adirondack’s Campus (Wilton or Queensbury) and half the day at their high school. School Districts provide transportation to and from the college campus. Students will receive a laptop in each program, textbooks, and all other materials specific to each program at no cost to them.

The Early College Career Academy is also open to high school students in other local school districts. To pre-register fill out the form below and you will be linked to more information and more opportunities to learn about the programs. Information Sessions and links will be provided after you fill out the form below. To sign up for a shadowing day, students should see their school counselor before Dec. 22.

Rich Johns to be Inducted to SUNY Adirondack’s Trailblazer Society

SARATOGA COUNTY — SUNY Adirondack will induct five members to the Trailblazer Society, a new distinguished alumni program for the college on September 28 during Homecoming Weekend. Rich Johns of Saratoga Springs will be one of the first five to be honored. The path to success for many alumni began at Adirondack Community College. For the college, humble beginnings in 1961 in Hudson Falls led to a new campus in 1967 in Queensbury and a new name, SUNY Adirondack, in 2010.  With the idea that paths unfold with twists and turns and that in life, success is derived from taking risks or changing direction, we have established SUNY Adirondack Trailblazers to celebrate the lives and careers of our distinguished alumni. A college lives through its alumni. Their success contributes to the college’s success and reputation. We seek to recognize outstanding alumni who provide an inspirational impact to our students from their accomplishments and service to their professions and communities. By honoring our former students, we hope to inspire today’s students to strive for both personal and professional success. The college’s Distinguished Faculty evaluated and selected the inaugural class from a competitive pool of nominations. Induction Information: Rich Johns, a native of South Glens Falls, began his academic career at ACC in 1968 and transferred to the State University of New York at Potsdam, where he graduated in 1972 where he received The Minerva Award, their highest award given to an alumnus. Johns taught elementary and middle school, and he coached tennis at Saratoga Springs High School for 38 years. Under his guidance, Saratoga won 17 League Titles, nine Sectional Team Titles and holds the Section II record for Class AA with 85 consecutive wins and a record of 107– 2 during that period. He has won numerous awards as a coach, an Excellence in Teaching Award by the SUNY Albany Chapter of The National Society of Leadership and Success in 2015 and 2016 and has been inducted into the SUNY Adirondack and SUNY Potsdam Halls of Fame as well as the Saratoga Springs School District and the South Glens Falls Athletic and Community Pride Hall of Fame. Rich was humbled recently by being included in the 2018 Upstate New York Basketball Hall of Fame by receiving the John Cahill Community Contributor Award. Following his passion of personal character development, Johns started a “pay it forward” mission called Act With Respect Always. His charitable foundation has grown into a national model of all students and athletes to follow. The Trailblazer Networking Luncheon will be held on Sept. 28 in the Northwest Bay Center in Adirondack Hall. Registration will begin at noon, with the lunch and program starting at 12:30 p.m. Seating is limited. To reserve a spot, email [email protected]

Round Lake Residents Say 'No' To Roundabouts

ROUND LAKE— As reported in Saratoga TODAY in its January 24 issue, the residents around Round Lake Road have risen up in force to actively resist the imposition of roundabouts as a solution to traffic problems at two key intersections.

While members of the Malta Town Board have characterized roundabouts here as a "done deal," the citizenry (about 75) who came out last Saturday, March 1 at the intersection at Chango Drive (one of the proposed sites) to wave signs and urge people to honk horns in support of their "no roundabout stance, as well as those who packed and spoke at a public hearing regarding eminent domain procedure at the town board meeting on Monday, March 3, say otherwise.

The town board voted at it’s last meeting of 2013 to accept Albany engineering firm Creighton-Manning’s (C-M) "preferred" alternative of roundabouts, though it noted in their report that it was a more expensive option and roundabouts that would be placed at the two intersections would have "non-conforming," features, or less than ideal specifications.

The roundabout projects are at the intersections of Round Lake Road with Ruhle / Raylinsky Roads and with Chango Drive. These two roundabout projects are estimated by C-M to cost $4.86 million, with approximately 80 percent funded by Federal and State sources while a project involving a traffic light (which does not exist at Chango Drive), turn signals and turning lanes (which are not at either location currently) would cost $3.1 million according to C-M estimates.

This caused resident Tim Downey at the public hearing to say that this issue came down to "Pork… you guys just wanted the money. The fix was in from the start."

Indeed, the acquisition costs of land for obtaining the proposed right-of-way widens the gulf between the two projects further. C-M estimated that roundabout right of way costs would be $165,000; while a traffic light project would be $39,900.

At the March 3 public hearing, representatives from C-M presented a report noting that some of the non-conforming issues had been resolved, but resident Elwood "Woody" Sloat noted that many remained, and even was skeptical about some of the "resolved" issues ever happening:

"The C-M group stated they are going to move the Stewart’s at Ruhle Road’s entrance/exit back (north) 20 feet and extend the splitter island. This was previously determined to be not feasible because of the extensive telephone/water/sewer and utility systems in this specific area.  Many residents, including myself, are skeptical that this will ever happen and will probably result in a "change order" (which will drive the project cost further) once they get approvals.

"The citizens will watch every step of this construction," Sloat said.

Other residents at the public hearing concentrated on the safety issue of roundabouts, both for vehicles and pedestrians.

"I fear there will be children’s bodies lying in the road." Said Shelda Roerig, resident whose family tree includes original residents of this area. Her family currently owns the ice cream stand and miniature golf course near the proposed Ruhle / Raylinsky roundabout that many area children frequent.

Of the 16 commenters at the public hearing, only one spoke in favor of the project that the town board had voted for.

While this is obviously not a scientific sample, the packed town board meeting, a good number of motivated residents who lined Round Lake Road on a frigid Saturday and the passion of the community, exemplified by the now 400+ signatures against the roundabouts submitted at the public hearing, indicate that even though the town board has eminent domain on it’s mind, they think otherwise.

Their fervor could be capsulized by Kevin Eitzmann’s comment at the March 3 public hearing:

"This is not how democracy works."

Well, maybe it is. Stay tuned.