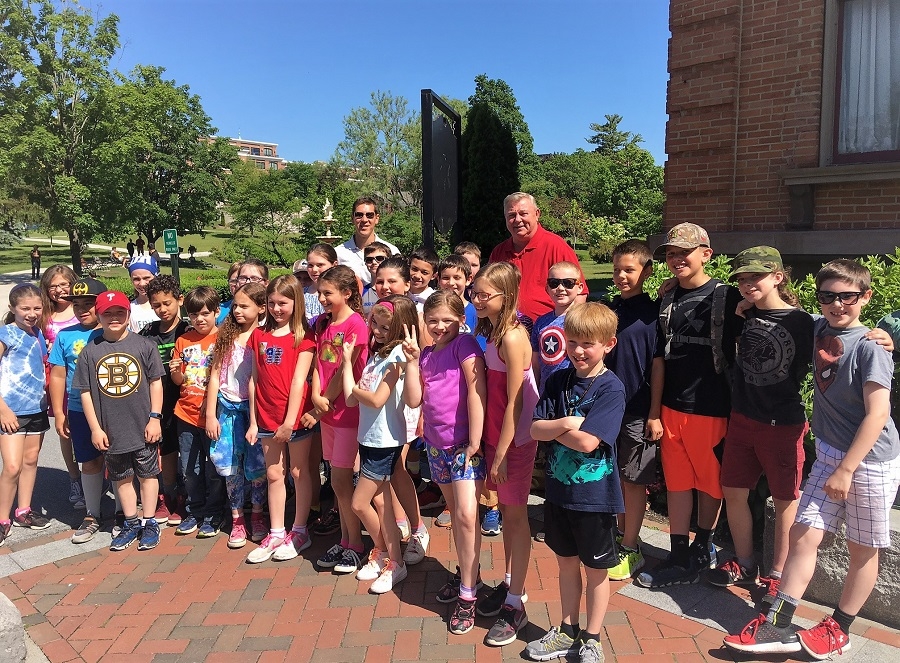 Dave Patterson, center in a red shirt, and fourth grade students from the Geyser Road Elementary School, outside the Saratoga Springs History Museum in Congress Park on June 8, 2017.

What are you doing today?

Taking a group of fourth-graders from Geyser Road Elementary School on an outside tour of Congress Park. When my group is finished, we’re going to switch with Jamie Parillo – he’s the director of the Saratoga Springs History Museum – and he will take the students on an inside tour of the history museum. This is part of the fourth-grade program on local history.

Where are you from originally?

Originally from South Boston. I’ve been living in Saratoga for about 40 years now. I used to be president of the history museum, and I used to teach a course on local history at Saratoga high school.

How has Saratoga changed in the 40 years since you’ve been here?

It’s changed quite a bit. The buildings have been sprouting like flowers, but way back in the day, in the 1880s, there were buildings over there (on Broadway) that were taller than they are now. As a matter of fact, the largest hotel in the world used to be right across the street from this park: The Grand Union hotel. So as big as Saratoga is getting now with the buildings, it pales in comparison to what it was in the 1880s.

Student question:  How long have the springs been in Congress Park?

Student question: How many springs are there?

Student question: How is Saratoga with the pollution?

Saratoga’s been pretty lucky because we haven’t had a lot of industry that would create pollution. Probably the biggest polluter in Saratoga Springs would be the automobile. Of course, 100 years ago we had horses and carriages - and horses have their own kind of pollution, if you know what I mean, so you had to keep the streets clean.

Student question: Are any of these places here haunted?

The building right behind you. Did you ever see a show called “Ghost Hunters”? Well a few years ago they came in and said there were spirits right in the museum here.

More in this category: « Neighbors: Snippets of Life From Your Community Danny Says: “The 40th Anniversary is Going to Be A Blast!” Jazz Festival Set to Stage SPAC Weekend »
back to top