On & Off the Field Luzadis Leads the Way 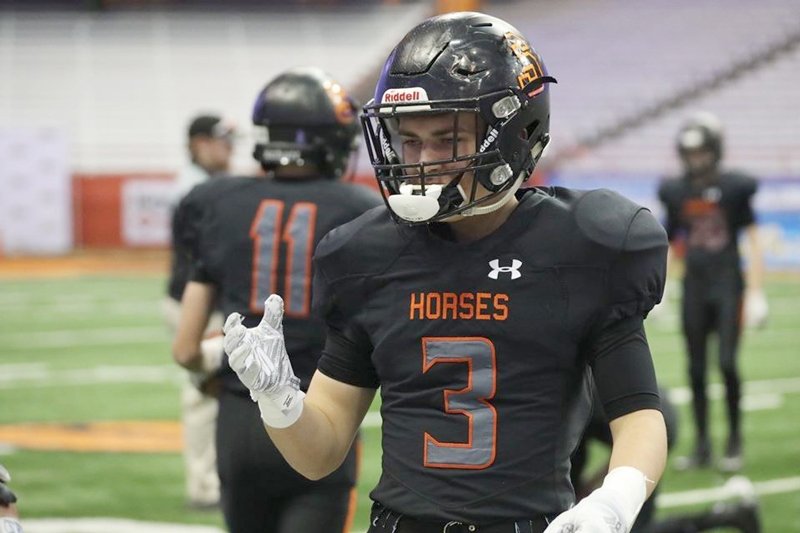 SCHUYLERVILLE — Charles Luzadis, an 18-year-old senior at Schuylerville High School, just had the football season of a lifetime: the Black Horses made it to the state finals.

Luzadis, a safety and wide receiver, has been playing football and baseball his whole life. He is an outfielder on the diamond.

“I used to prefer baseball but after the past couple of years it’s really been pretty much a tie between the two for my favorite sport. The past couple of years with football, the teammates and coaching staff have just been a lot of fun to be around and that really boosted football for me. I’ve really enjoyed playing with all my friends and the coaches,” Luzadis said.

Coach Jack Burger referred to Luzadis as the “coach on the field.”

That adversity was two of the best players being injured and Luzadis stepping into their positions, even though they weren’t his practiced skillset.

As a team, the guys participated in traditions together, such as Lollipop Thursday, which is where a team member reads a motivational quote from a book the day before the game and then everyone gets a lollipop. Each year a book gets passed down and whoever is chosen to read picks out a passage from the book.

“Then we all have lollipops,” Luzadis laughed, explaining the time-honored tradition.

Luzadis is also 6th in his class ranking and is the President of his high school’s National Honor Society, the President of Varsity Club, and a member of the Spanish Club. Through those activities, he participates in various community service projects and does a lot of fundraising for non-profit organizations.

“Education is definitely something I value very much in my life.  I take a bunch of AP classes with challenging coursework. Something that I know is really going to help me in life, the more I work at it,” he explained.

He has not yet decided what college he will be attending as he is still waiting to hear back from some that he applied to. He has, however, spoken to a few coaches about possibly playing football on a collegiate level.

In his free time, this busy senior enjoys spending time with his friends and works part-time at King Brother’s Dairy ice cream stand.

Still, one of his favorite things about football this season was playing on the field with his younger brother Anthony, who is a freshman and on the JV team, who suited up for the varsity games.

“Playing on the field with him was pretty special because we haven’t been able to play a lot with each other during the course of our childhood except when we were really little because of the age difference. This year, to have it be my senior year, and to have him be there and play with him has been really fun,” he explained.

How can a busy senior do all of that and still enjoy his social life?

“My desire to win. I just love winning. It makes everything fun. Also, my family, they have been very supportive of me throughout my entire life and so I really want to do well for them,” Luzadis stated.

More in this category: « Alexandra Nicolaus: Athlete of the Week Local All-Star Moments »
back to top