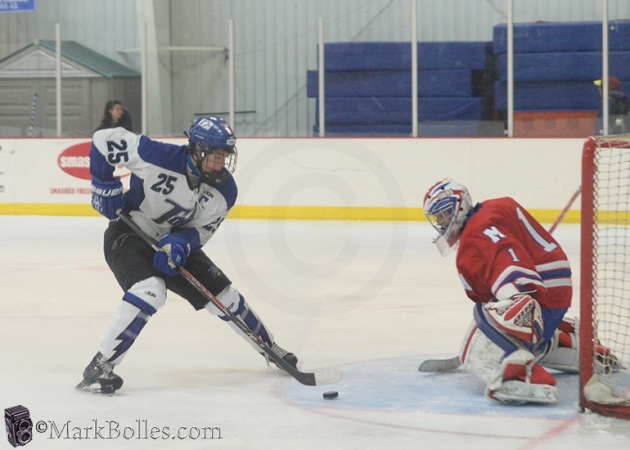 SARATOGA SPRINGS – While many of us used the holiday period to relax and catch up on some rest, the Saratoga Springs High School hockey team did anything but that – hosting fellow top ranked teams from around the State (Massena and Williamsville North) on successive days, December 29 and 30 at Weibel Rink.

While Saratoga was bested in each of these two closely contested games, they used it as an opportunity to sharpen their skills against some of these leading squads, with an eye towards finishing strong as they head into the New Year. Based on their performances in their return to league play, a 12-1 thrashing of Niskayuna/Schenectady on Friday, January 8 followed by a 9-3 triumph over Burnt Hills/Ballston Spa, both at Weibel, this approach appears to have yielded immediate and substantial dividends. The victory kept Saratoga undefeated (9-0) in league play, as well as a top state ranking: Saratoga was ranked seventh in the State – by the NY State Sportswriters Association poll on January 12. They are the highest-ranked squad from Section 2.

In the game against Nisky/Schenectady, Saratoga scored three goals in the first period, effectively putting the contest away at that point. They continued their onslaught – tallying six more times in the second before N/S could answer. Senior co-captain Elliott Hungerford, who had 4 goals and 2 assists, led the scoring. Junior co-captain Jake Fauler, sophomore Caleb Smith and senior Colin Paton had 2 goals each. Against BH/BS, Fauler and junior Jonathan Luse scored 3 goals each.

Saratoga travels to Suffern for a tournament this weekend, and returns to Weibel contests vs. Glens Falls on Wednesday, January 20 and against Ithaca on Friday, January 22.Saratoga Springs high sc

Saratoga travels to Suffern for a tournament this weekend, and returns to Weibel contests vs. Glens Falls on Wednesday, January 20 and against Ithaca on Friday, January 22.

More in this category: « City Honors Blue Streaks Football Cheers for the Clown Prince of Basketball: Meadowlark Lemon »
back to top