The Saints of Spring 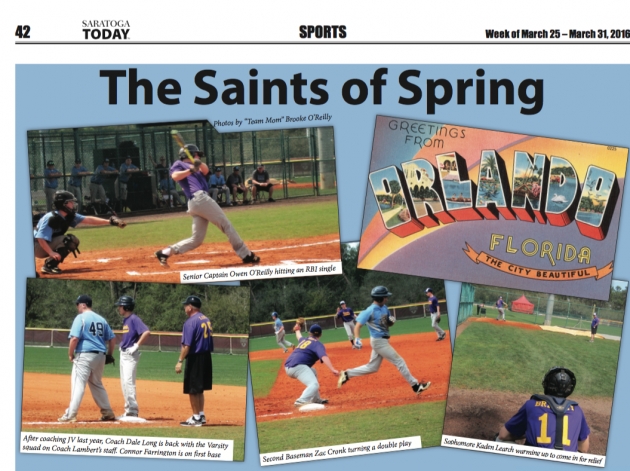 ORLANDO, FL – Even with a mild winter, you could certainly do worse than an Orlando dateline! Particularly when the itinerary involves Walt Disney World’s Wide World of Sports Complex.

Behold the Saratoga Central Catholic Baseball squad, in the midst of an annual nine-day tournament trip. The Saints’ varsity will be stretching, batting, pitching and catching in the sunshine until February 26. After some more practice at home, they open up their season with a bang: at Canajoharie on Monday, April 4. Their home opener (also against Canajoharie) is at Veterans Memorial Park in Geyser Crest on Wednesday, April 6 at 4:30 p.m.

The first weekend of the season has the Saints hosting Galway on Friday, April 6 at 7 p.m. at Veterans, and play in The Phil Waring Memorial Tournament all day on Saturday, April 9 at both Veterans and East Side Rec.

Many thanks to Coach Lambert for introducing us to “team mom” Brooke O’Reilly, and to Brooke herself for these great snaps of the action in Florida.

More in this category: « Spa Catholic Track Works it Out! Spa Catholic Pitcher Schmidt Commits to Rollins College »
back to top