Celebrating a Great Year… and a Great Tradition 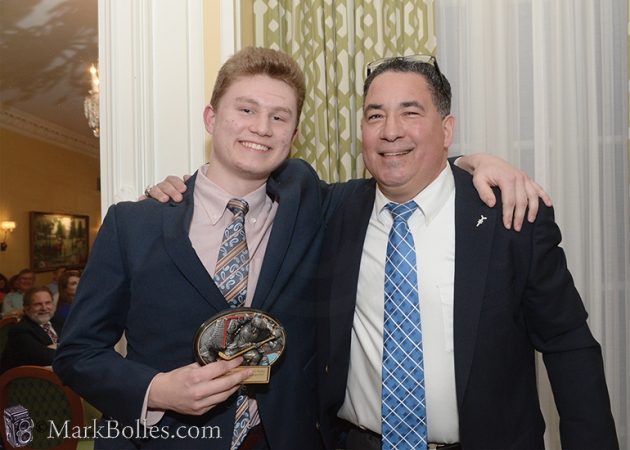 Coach Dave Torres celebrates with senior Elliott Hungerford, who received the Most Valuable Player and 2016 Hobie Baker Character Awards. Hungerford was also the CDHSHL Player of the Year.

SARATOGA SPRINGS – An awards banquet to celebrate another exemplary season, in which the Saratoga Springs High School hockey team added another Section 2 championship, as well as another State Final Four berth, was celebrated at the Saratoga Golf & Polo Club on the evening of Wednesday, March 30.

While athletic achievement certainly center stage, those on the team who achieved academic excellence while performing on the squad were given special recognition. The evening also spotlighted the team’s 11 seniors, which included three of the team’s four co-captains: Elliott Hungerford, Brendan Coffey and Josh Dagle.

Those three, as well as seniors Ryan Hogan, Colin Paton, Garret Smith, Sean Holmes, Matt Russell, Austin Patterson, Danny Hobbs and Tom Fornabia, now join a new roster: that of esteemed Saratoga Hockey Alumni, part of a 40-year tradition that will be there to celebrate the great moments to come.

More in this category: « National Museum of Racing and Hall of Fame Spring Events and Hours Dodgeball: It’s Not Just For Your Kids Anymore! »
back to top