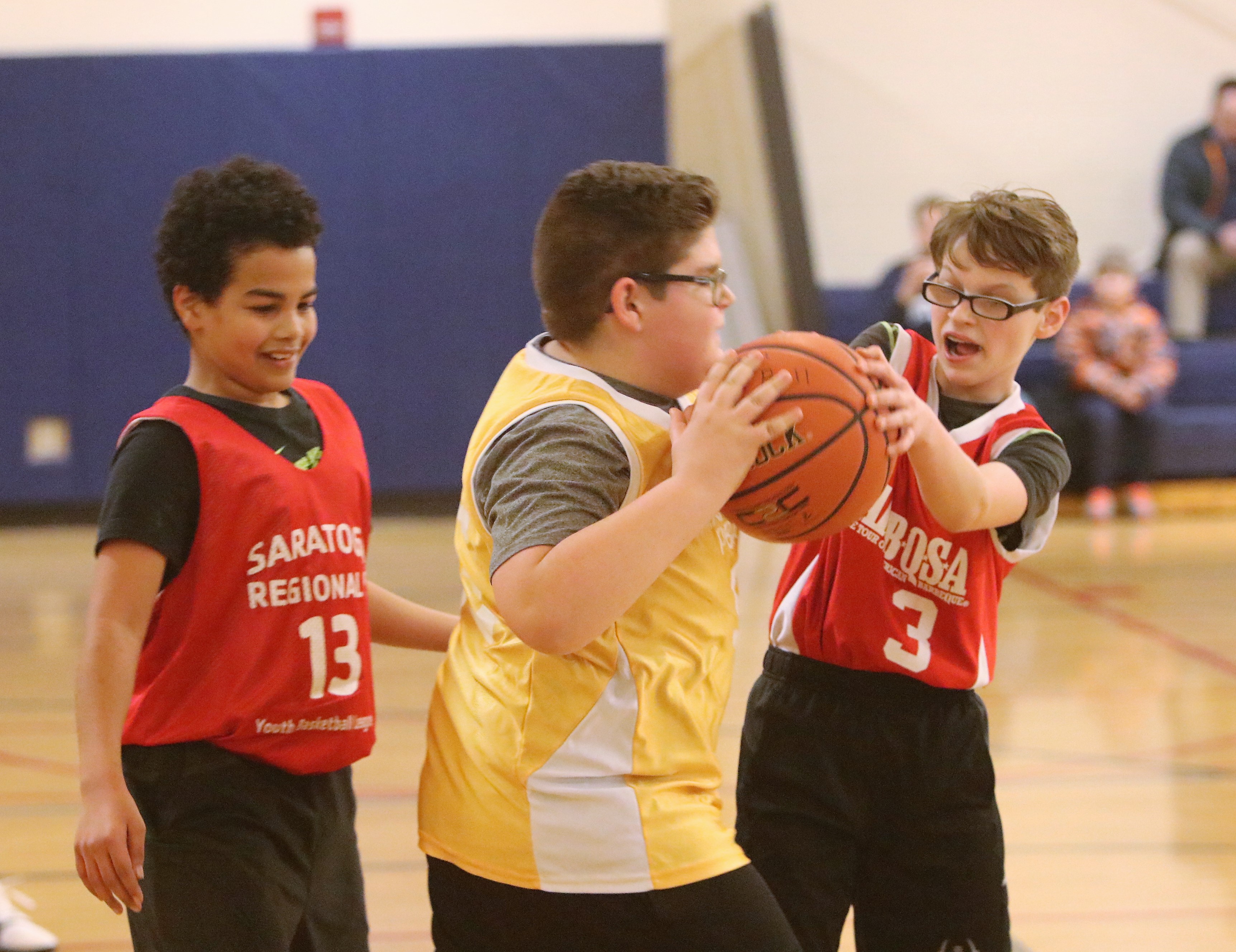 Saratoga Gymnastics Hosts All-Around Meet
SARATOGA SPRINGS — Saratoga Springs High School gymnastics hosted their annual All-Around Meet on Thursday, Feb. 8 at the Wilton YMCA. Gymnasts from Bethlehem, Shaker and Guilderland also competed in the event. The gymnasts were broken into two groups: (1) gymnasts who had scored greater than 29.0 allaround during the competition season; and (2) gymnasts who had scored less than 29.0 all-around during the competition season. With respect to the higher scoring group, Saratoga took home the top three places led by all-around winner Ava Dallas with a score of 37.1, followed by Sophia Damiano who scored 36.7. Laura Eberlein was third with an allaround score of 34.925. Rounding out the top five were Rachel Drislane (Guilderland) with a score of 34.55 and Kate Dellaratta (Saratoga) with a score of 33.0. Top finishers in the under 29.0 scoring group were: Domenica Hotaling (Shaker) with an all-around score of 27.75, Anna Green (Bethlehem) – 27.55, Savanna Schalberg (Saratoga) – 26.85, Courtney Rafferty (Guilderland) – 26.625 and Kate Sager (Shaker) – 26.50.

Saratoga Blue Streaks Hockey
SARATOGA SPRINGS — The Saratoga Blue Streaks Varsity hockey team played the Guilderland/
Mohonasen/Scotia-Glenville Storm in a league game at 4:15 p.m. on Wednesday, Feb. 7 at the Weibel Avenue Ice Rink. Saratoga won the game 3-0 with goalie Brad Hipsley recording his third league shut out. Will Detora scored the first goal in the first period with an assist from Sam Jacob; Joe Amodio scored goal two in the first period with assists from Will Detora and Xavier Clark; the final goal was scored in the second period by Will Detora again, with an assist from Sam Jacob. Blue Streaks Goalie Hipsley had 13 saves and Daniel Cooper, from the opposing team, had 45 saves.

Saratoga Regional YMCA Youth Basketball League
ROTARY JUNIOR DIVISION: Saratoga Financial Services 31 - Mexican Connection Restaurant 24 Saratoga Financial had an early lead and took a 31 to 24 victory over Mexican Connection. The winners got eight points apiece from Ryan Boyle, Alex Cutler and Carter Wood while teammate Eric Eckard had two points. Ethan Dinsmore had a game high 10 points in the loss Saratoga PBA 37 -
PJ BAR-B-QSA 18 PBA took a 13-point lead into the second half and never looked back in their 37 to 18 win over a depleted PJ’s BAR-B-QSA. Steve Bebee had 11 points, Emylyn Tineo added another nine points in the victory. PJ’s had only six players because of injuries but they never
gave up, and were led by Jason Bell’s eight points along with five points from Antonio Calderon. SENIOR DIVISION: Saratoga Firefighters 54 - Berkshire Hathaway Blake, Realtors 49 The Firefighters were behind until the last four minutes of the game. They used their “never say never” attitude to pull off a 54 to 49 victory over Berkshire Hathaway Blake Realtors. Firefighters had three players scoring in double figures, led by Noah Rourke with 17 points, Eyner Tineo with 15 points and Robert Orr had 10 points. Rourke hit nine out of nine free throws in the last 90 seconds to seal the win. The Realtors battled right down to the final horn got a game high 19 points from Ian Fisk while teammates Seth Koval and Isaiah Barnes had 13 and two points respectively. Village Photo 51 - Cudney’s Launderers 42 This was also a game that was close until a technical foul in the last two minutes gave Village Photo an eight point lead which helped them get the nine point win over Cudney’s Launderers. Village Photo now goes into the final game of the season leading the division. Village Photo spread the scoring around and were led by Jose Garcia, Donald Steves and Pat Deschaine each scoring 14 points. Cudney’s, as always, fought to the final second, Hunter Regels and Elias Whol each had 13 points and Will Sambrook added four points, Coleman Fignar and Nate Scott scored four and three points each.