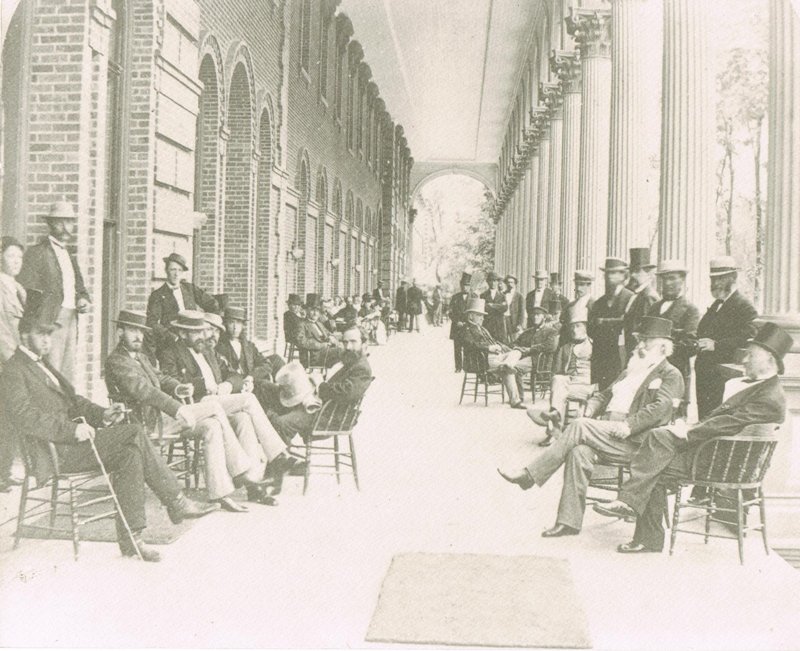 Interesting stories of famous visitors coming to Saratoga Springs are numerous and the list of notable individuals is long. These visitors truly helped Saratoga to become the number one summer tourist destination in the United States during most of the 1800’s.

I think each of us have a different view as to what makes a person a notable individual. Some would pick stars of the stage, others would be impressed with politicians, or writers, titans of industry, lawyers, famous orators or American Presidents. In this case there is no problem with which group to pick, since we had them all visit Saratoga Springs.

Starting with future President George Washington visiting the High Rock Spring in 1783 with General Phillip Schuyler we continued with visits from other Presidents like Buchanan, Grant, Fillmore, Tyler, Jackson, Arthur, Cleveland, Van Buren, Harrison, Pierce, J.Q. Adams, Garfield, Hayes and Roosevelt. They came for political reasons as well as for the high society of the day. Saratoga was a place to see and be seen.

We also entertained international guests like Napoleon the third, brother of Napoleon Bonaparte and former ruler of Spain and Naples for five summers in the 1820’s. Napoleon III spent his time on the property that today is known as Yaddo. In the 1820’s the property was owned by Jacobus Barhyte who operated a tavern and boarding house that featured renowned trout dinners with fish from the ponds on the property. Napoleon III loved the land so much he offered to buy the property for a large sum but was refused by Barhyte. The famous French hero of the American Revolution, the Marquis de Lafayette, was on a world tour in 1824 and made an extended stop in Saratoga that summer. We must have been a great summer destination if international guests like Napoleon and Lafayette made time to visit our city.

Many notable American politicians also came to our city for the purpose of attending the many political conventions that were held in the city or to give speeches when running for office. Henry Clay, John Calhoun, Daniel Webster and Aaron Burr all visited Saratoga.

The former Vice-President Aaron Burr had other connections to Saratoga beside just a casual summer visit. Burr in his later years was single and in need of funds since he was a poor manager of his finances. In 1832 he met Eliza Jumel who had great assets, having done a tremendous job of running her husband, Stephen Jumels’ wine importing business after his early death. The former Mrs. Jumel was a well-known figure in the social circles of Saratoga during the summer season. Eliza resided at her summer home on Circular Street, when not in her NYC home.

Eliza Jumel wanted the respect that marriage to a former Vice-President would give her and Burr was looking for financial stability, so they were married in 1833. A short time after their marriage, Burr had lost thousands of dollars of their money with poor investments. Eliza had made it clear that the practice needed to cease. After continued losses by Burr, Eliza decided to divorce him. In search of protection in the divorce proceedings she decided to retain a lawyer that would work to protect her assets. She looked for someone who would have a real desire to help her, so Eliza retained the legal services of Alexander Hamilton’s second son, Alexander Hamilton Jr. Since Burr killed Hamilton Sr. in a duel, she felt the choice was a good one. Later she served the elderly Burr with the divorce papers and the divorce was finalized in 1836, on the day Burr died.

Victor Herbert was music director at the famed Grand Union Hotel for a few summers in the early 1900’s. His 60-piece orchestra provided musical entertainment to hotel guests by playing as many as three concerts a day. Herbert became good friends with Tom Winn who was head of hotel security. Every night after the evening concert Herbert chose to unwind by taking a walk around the courtyard of the grand hotel with Winn. On one warm summer night as they walked, they heard a muffled voice from the bushes say; “Kiss me” and a few seconds later the same voice said, “Kiss me again”. Both Herbert and Winn smiled at each other and walked away. Victor Herbert used this as inspiration to compose music for a song entitled “Kiss Me Again”. Henry Blossom wrote the lyrics and it became the cornerstone for the operetta entitled: “Mademoiselle Modeste”. The opera opened on Broadway December 25, 1905. Prior to the opening of the production Herbert sent Winn two front row tickets to the opening with a note that read; “You were at the conception, come see the birth”. Such was summer life in Saratoga Springs.

This trend of famous visitors continues today with many notable people visiting SPAC, the Racetrack or just the city. We are very lucky to live in a city that we love so much and is appreciated by so many that visit even in the 21st century.