History of Saratoga - Summer in Saratoga: 1874 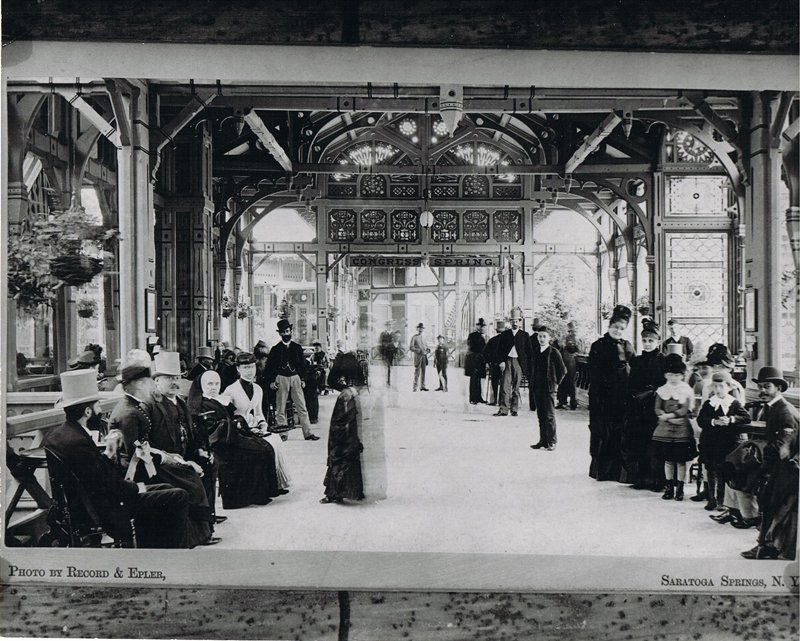 A common publication in the 1800’s was the location specific travel guide, that would help visitors traveling to a particular location make the best use of their vacation time. As you can well image, Saratoga Springs had many such guides for visitors since we were a popular destination for summer visitors.

I find it interesting reading these guides because they give us a look back in time as to what was exciting and popular for visitors coming to the city. I recently searched the travel guide titled; “SARATOGA and What Is To Be Seen There.”  This guide was written in 1874 by R.F. Dearborn M.D. and sold for $.10 a copy. The first page of this guide proclaims that Saratoga is the “Queen of American Spas.”

In the summer of 1874, the permanent population of the city was about 9,000 people with the number of summer visitors in the tens of thousands. The 1874 guide professes that we can accommodate at least 15,000 visitors in the many grand hotels of the city with an unknown number to be housed in boarding houses and private homes. The guide informs us that; “During August Saratoga is always full, crowded-squeezed.” The description continues with “The streets are thronged with a gay and brilliant multitude, engaged in riding, driving, walking, each enjoying to the utmost a fascinating kind of busy idleness.”

The multitude that visited us, mostly chose to stay in the grand hotels in the Broadway area. The grand hotels all offered the American plan that provided for one price, the room and three enormous meals a day. Since there was keen competition to attract guests to fill the grand hotels those establishments added daily entertainment in the forms of musical concerts, nightly dances and balls, speakers and activities like billiards for those guests. The guide professes that the number one hotel of the day was the Congress Hall. Congress Hall had been re-built in 1868 by H.H. Hathorn, after a fire a few years before had destroyed the original structure. Since this guide went to print before the 1874 season began, I think it is interesting that the Congress was singled out as the number one hotel. In the summer of 1874, the newly renovated Grand Union Hotel would also impress the visitors. The cost of a stay at these hotels varied from about $3.50/day (or higher) to a weekly rate of $21-$30 /week. These numbers are great to compare with hotel rates in the city today and do not include three meals per day.

1874 is an interesting time in our history since it is the last summer that the “Big Four” were in existence in the city. The Big Four were the four largest hotels in the city at the time, Congress Hall, Grand Union, United States, and Grand Central. A fire would break out on October 1, 1874 and quickly destroy the beautiful Grand Central, leaving only three grand hotels from that date.

The 1874 guide defines the best neighborhoods of the city as being the area around the streets of Circular, Lake Avenue and Franklin Street. In 1874 North Broadway was starting early construction and some of the largest houses would be built there and on Union Avenue in the next few years. Broadway is continually mentioned in the guide as a beautiful street not only because of its grand width but also because of the double row of elm trees that provided such needed shade to the many people strolling that thoroughfare on hot summer days.

Many visitors even in 1874, came to Saratoga Springs to try the mineral water. In that year Dr. Whiting, a long-time physician in the city, was considered the expert in the medicinal properties of the springs. Dr. Whiting was like many other physicians in the country that provided patients with a “prescription” or guidance for the proper consumption of the healing waters. The general thought was to drink one or two glasses of mineral water in the morning prior to breakfast. The most popular morning spring was the Congress located in Congress Park. Doctors generally told patients following the consumption of the water, to take a brisk walk. The combination of high mineral content in the water and the physical activity usually made the brisk walk to the nearest bathroom. For many the intestinal cleansing effect was dramatic and welcomed. Some patients were also instructed to drink from a different spring in the afternoon and some even had a third spring added to their routine before retiring in the evening. The guide discusses the virtues of the many mineral springs in the city, but highlights the popular ones, Congress, High Rock, Columbian, Excelsior, and Empire in more detail.

Summer guests traveled to the Spa City several different ways. In the early 1800’s transportation was very slow and hard on the traveler. The railroad would not connect with Saratoga Springs until the summer of 1832. That meant transportation to the city, in the early days, was by stagecoach and sailing ship. Many of the early visitors to our city were from the southern states. They came north in the summer for the social aspects but also to escape the heat and to find clean drinking water. Water borne disease was very common in large southern cities in the early years of the 1800’s and Saratoga mineral water was generally pure and from a deep source that helped to protect that purity.

By the year 1874 transportation to Saratoga had changed for the better. The railroad came to Saratoga in the summer of 1832 and each year more guests used that faster and easier form of transportation.  The guide contains two advertisements for steamship companies that provided cheap fast transportation. In that year Citizen’s Line Steamboats from New York traveled the Hudson River and cost $2.50 to travel from Saratoga Springs to New York City. Guests boarded the train in Saratoga to travel to Troy. The train took guests to a steamship that left nightly at 8:30 PM from Troy for its overnight trip to New York.

Even though the times were different the many accounts of the city in 1874 paint a picture of a summer visit to Saratoga that was magical. Having grown up in this city, I guess I would say that every summer in Saratoga is magical.