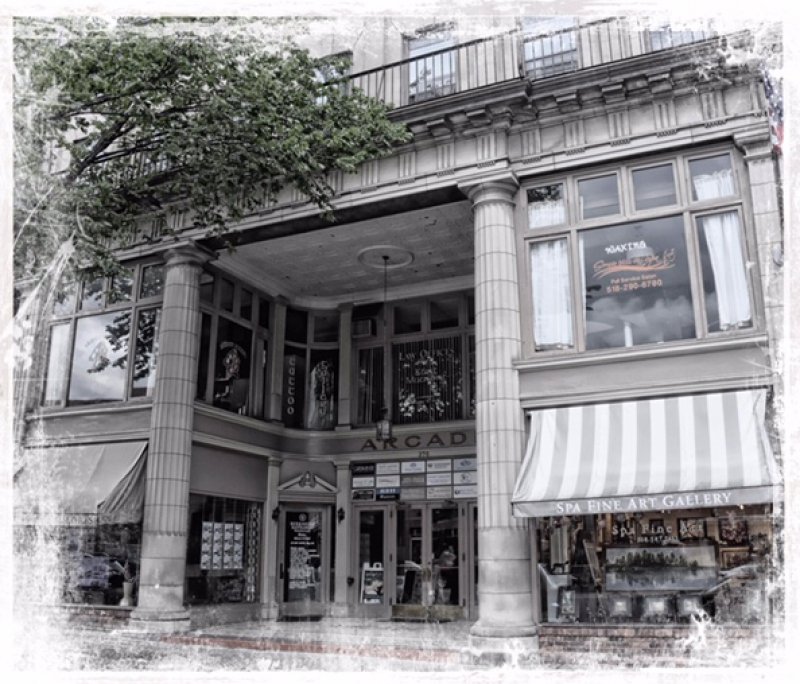 Saratoga Springs has a very special energy.  Those of us who are lucky enough to live here know of this feeling as we walk about the city and visitors often say they can feel it when they arrive.

I give ghost tours in Saratoga and many people over the years have told me their stories of the mystifying sprits and strange happenings they have encountered.

Often those stories involve their experiences relating the more infamous buildings in the city:

The Arcade Building at 378 Broadway is home to many disasters. First built on the property was the Center House constructed in 1851 by Lewis Putnam, the grandson of Gideon Putnam, one of the first settlers of Saratoga. It burned down in 1853 and was replaced by the Nicholas Building which  burned down in 1869. The next building was called the Arcade building, and there was a spectacular fire here in 1902.  Everything burned down except the stone façade which remains today. Five bodies were found in the ruins—a couple died in each other’s arms with their cat nearby.  It was one of the worst fires in the city’s history and also destroyed the offices of the Saratogian Newspaper, a theater, and a post office. The building is full of secret rooms and underground passageways that connect to other buildings.

Many of the people who work there have had ghostly experiences. Some have seen an Asian lady who, upon further research, it turns out, had died in the fire. A massage therapist working in the basement would often feel the brush of an invisible cat on her ankles while she was working. She eventually had to move her practice.

The Adelphi Hotel on Broadway is the last of the Victorian Era hotels built in Saratoga in 1877. It is the stuff of legends and John Morrissey, the casino magnate, died there in 1878.  In the 1950s, it was auctioned off to a young couple, Sheila Parkert and Gregg Seifker for $82,500.  But the property was badly in need of renovation. The roof had caved in, and the only thing serviceable was the bar which they opened and used the proceeds to bring the hotel back to its glory days. They filled the hotel with antiques and other objects from the era — all those things that spirits love to be around.  In 2013, a developer bought the hotel for $5 million with the idea of renovating it. However, after starting the project, they ran into problem after problem and soon realized that they would have to reconstruct the building completely.

The developers also found abandoned tunnels and chambers—all the conditions perfect for harboring spirits. According to a recent story in the Albany Times Union, the reason for the extensive rebuilding was that the hotel was only built for summer use like most of Saratoga’s hotels and that the owners had simply patched up the construction problems. Others say that the spirits did not like being disturbed and made life difficult for the developers forcing them to rebuild completely.  Objects like furniture and rooms themselves can often retain strong emotions experienced in their presence, and with more than 100 years of emotions floating through this hotel, there could be a lot of baggage.

Longfellows Restaurant on Union Ave. also has a haunted history. The property had a barn used by bootleggers during prohibition. Saratoga Lake was the home of several illegal casinos run by the mob.  It is rumored that organized crime would rub out their victims in the barn.

In addition, there was a funeral home across Union Ave. from the Inn. During the winter, when the ground was frozen, and it was difficult to dig graves, they would store the bodies on the property. That barn has since been torn down, but residents, including the owner, Steve Sullivan, report a strange feeling about the area.

I have spoken with hundreds of people over the years about their experiences and have spent many hours tracking down these legends in the Saratoga Room of the Public Library which has preserved so much of the history of these great (and often haunted) buildings.  There are many stories of ghostly experiences in our city.  Saratoga truly has a wonderful energy.

Joe Haedrich is the author of Haunted Saratoga. He gives ghost tours of Saratoga Springs every Friday and Saturday from May-October. HauntedSaratogaTours.com.