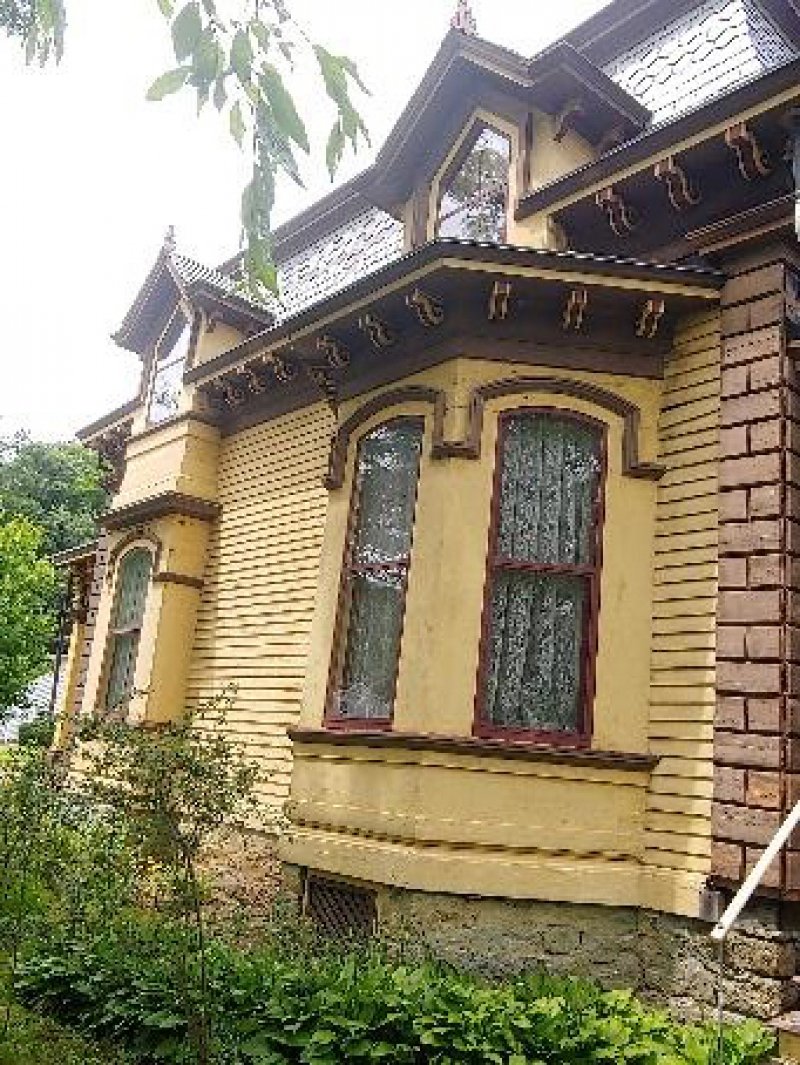 One Hundred and Fifty Years ago, on July 15, 1871, a news article appeared in the Saturday edition of the Ballston Journal, “Wm Brown and John Parent are preparing the foundations for two fine houses on Bath Street, opposite the Washington Spring.”

Brown’s house would not be the typical gable-roofed residence, But a fashionable French-Gothic Mansard. The post-civil war period was known for unabashed ostentation. Suppliers, manufacturers, and financiers had profited greatly from the government’s need to equip and maintain its armed forces. There was so many nouveau riche showing off their wealth, it was fashionable to do so.

Brown was a grocer in Ballston Spa and had made a comfortable life for his family. He was, in no stretch of the imagination, wealthy. That didn’t stop Brown, a poor boy from Oswego, from trying to appear rich.

Not to be shown up by Mr. Parent or anyone else, he engaged the services of architect, Marcus Cummings. Cummings worked out of Troy and had recently landed important commissions in Saratoga Springs, including the Village Hall, John Morrissey’s Casino, and the railroad station.  He was also designing the Glens Falls Opera House.

Brown’s Mansard-roofed cottage posed a stylistic problem. It was essentially a story and a half structure. The steep roof covered most of the second floor, allowing for ten-foot ceilings. However, windows in the roof area were traditionally set above the cornice, creating a claustrophobic interior.

Cumming’s solution was to push the second-floor windows through the cornice, creating a two-foot by four-foot alcove, peaked by the sides of a right, isosceles triangle to a height of over eight feet.  The result opened up the second-floor rooms, creating airy spaces of fanciful angles.

That solution created another problem.  Dormers formed by the projection through the cornice had to be supported. Two were over porches, and one over a bay.  The fourth was over nothing.

The solution was to extend a downstairs window through the wall to support the fourth window.  Two provide a balanced interior, the first-floor parlor’s other window also had to be extended, even though it was under the front porch.

That created yet another problem for Cummings.  He couldn’t leave the resulting alcoves unadorned in a formal parlor.  He topped them with canopies jutting into the room, which were supported the same way as the presidium over the Glens Falls Opera House stage, with square columns turned 45 degrees.  The columns of Mr. Brown’s house, though, were decorated with an indented molding, terminating with a right isosceles triangle.  The architect could have stopped there but carried over the same interior design to the bay window in the second parlor.

Having solved the cascading problems, Cummings added an exterior flourish of sheer genius.  In a period of heavily decorated exterior window surrounds, he eliminated all moldings from around the second floor, front parlor, and bay windows. Only windows under the side porch and on the non-public side of the house had heavy moldings. A light band course ran the length of the house, tracing over the tops of the windows on each floor. (see exterior picture above)

Finally, Cummings created a false tower by pushing to the ceiling four, tall, narrow second-floor windows above the house’s entry and capped them with a four-gabled roof topped with a crest.  The over-all effect of steep-roofed dormers rising along the height of the building, an unbroken span of body color along the public sides of the structure, and an apparent tower, was a far larger and taller house than the small French Gothic cottage really was.

Mr. Brown had a house unlike anyone else, except the owners of the Glens Falls Opera House.  They had Cummings design a slightly larger sister house, which was built on the corner of Platt and Warren Streets in Glens Falls.  Eventually that building was cut into apartments, allowed to deteriorate, and torn down several years ago.  Brown’s cottage remains, one of Ballston Spa’s many architectural landmarks.

John Cromie is the Ballston Spa Village Historian, has authored an architectural survey of Ballston Spa, was one of the organizers of Preservation Association of the Southern Tier and has served with Saratoga Springs Preservation Foundation for 25 years on its board and advocacy committee.

Read 864 times
More in this category: « Saratoga County Soldiers Fought at Saipan The Great Intercollegiate Regatta of 1874 »
back to top