The Great Intercollegiate Regatta of 1874 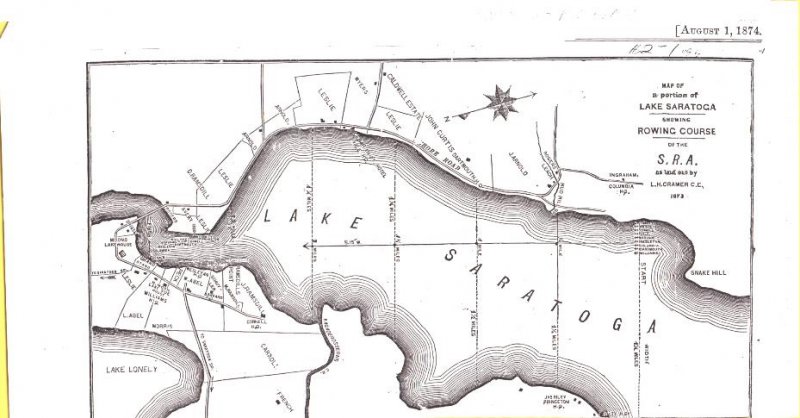 Nothing is quite as exciting as being part of the crowd at a Super Bowl or at the Olympic Games. That type of excitement must have been experienced by Saratoga Lake dwellers in July 1874 when the “Great Intercollegiate Regatta” came to our community. Nine colleges – Harvard, Yale, Columbia, Wesleyan, Dartmouth, Williams, Cornell, Trinity and Princeton all entered six man shells. While each school brought their own fans to the area, most interest (especially betting interest) centered on the fierce Harvard –Yale rivalry. In a race five years earlier, Yale had beaten the boys from Harvard but were charged with unsportsmanlike conduct and disqualified. Bad blood existed between these two prestigious members of the Ivy League.

Rowing was the first college sport to gain popularity in America and is responsible for three essential elements of modern college athletics – recognizable school colors (allowing spectators to see the position of the boats from the shore), organized cheering and gambling.

Viewed by over 25,000 people, the event caused The New York Times to state “We can scarcely remember an event not involving a war, or some vast issue in politics, which has occasioned so much excitement. Crowds of persons waited around the newspaper offices last night until after dark, and we received many hundreds of messages from all parts of the country requesting information about the result of the race. In fact this college contest became all at once the absorbing subject of the hour. The Chicago fire was as much of a thing of the past as if it happened ten years ago.” The interest was so great that John Morrissey, owner of the Saratoga Race Course, declared “There will be no (horse) racing during Regatta Week.”

The course was a three mile straightaway starting near Snake Hill and running due north near the entrance to Fish Creek.  A grandstand was constructed near the finish line and “farm wagons, brick carts- in fact, every species of vehicle going on four wheels” were hired to provide rides from the fashionable hotels in the city. It was rumored that some local farmers were charging as much as $50 for their carriage and team. Race fever was fed by the large sums wagered on the outcome.

Originally scheduled for Thursday, July 16, the race was postponed twice due to rough waters. When it finally went off on Saturday morning, the crowd was much diminished due to social conflicts or loss of interest. Among those who missed the race because of a conflict was President Ulysses S. Grant and his wife Julia who spent the day visiting the Methodist Camp Meeting at Round Lake. Arriving on the morning train from Saratoga Springs sometime before 10 a.m., he spent some time at the Bishop’s cottage meeting with dignitaries and then was escorted to the preacher’s stand where he was introduced to the crowd and received with prolonged applause. After enjoying a sermon on Power and Assurance of the Gospel by the Rev. Douglass from Montreal, he ate dinner, held a short reception for the public, and departed on a special train for Saratoga. A picture of Grant surrounded by a group of admirers appears in Mary Hesson’s Round Lake: Little Village in the Grove.

So who won? Was it the favored Yale team or their arch rival Harvard? Neither. The team from Columbia was the winner with Harvard placing third and Yale embarrassingly last. Both Harvard and Yale filed claims of foul against their rival but both were disallowed by the judges. Yale then challenged the boys from Cambridge to go “mano a mano” with backers offering bets as much as $5,000. Harvard responded “After the conduct of the Yale University crew, not only during the race but also at the conclusion of the race just completed, the Harvard crew refuses to entertain a challenge whatever from the Yale University.”

The Regatta was run in Saratoga again in 1875, but moved away in 1876 and never again captured the imagination of the sporting world. However, a local boy, James Riley from the Riley family of Riley’s Cove and Riley’s Lakehouse, became a national rowing star in the single scull. In 1882, he won all 56 races he entered and continued rowing on Lake Lonely until he was 76 years old.

Paul Perreault has been the Malta Town Historian since 2009. He served as principal in the Ballston Spa School District from 1978 until 1998 and as a history teacher at Shenendehowa High School from 1967 until 1975. He is a member of the Association of Public Historians of New York State, the Saratoga County History Roundtable and the Ballston Spa Rotary Club. Paul can be reached at This email address is being protected from spambots. You need JavaScript enabled to view it.

Sources: “Regatta Week at Saratoga” Harvard Crimson, Oct. 2, 1874. The Fourth Annual Regatta of the Rowing Association of America, July 18, 1874 at Saratoga Lake  from the Local History Room at the Saratoga Library.