The Gamblers and Gangsters of Saratoga 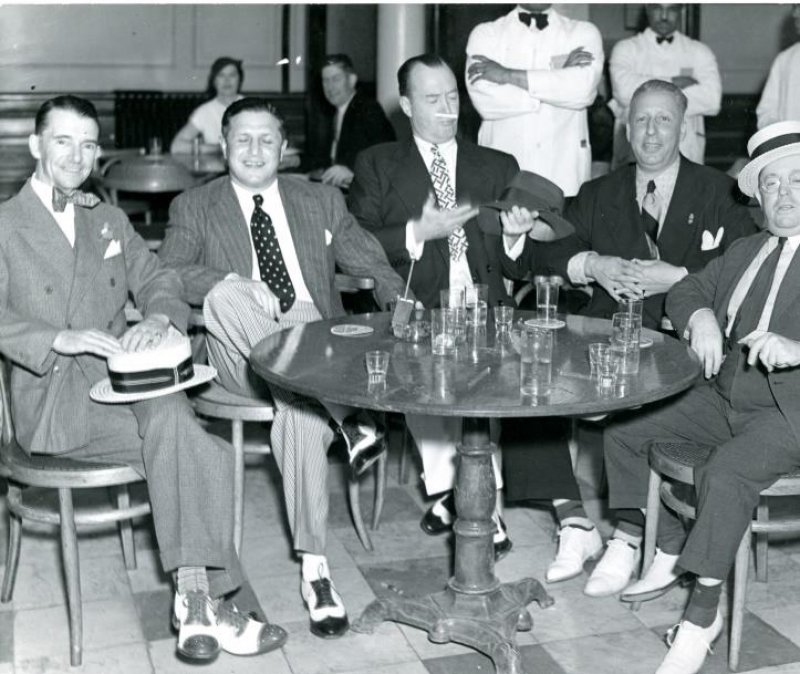 “Killer” Madden (at far left), notorious underworld figure, enjoys a laugh with a few of his pals in the dining room of the Grand Union Hotel in Saratoga Springs. Photo provided by The Saratoga County History Roundtable.

Saratoga has always been a gambling town.  Even before the famous racetrack was built, Saratoga was full of gambling dens.  Many of the early gambling places were run by men who could be considered “gentlemen gamblers.”  They ran relatively clean games and did not engage in violence or other forms of vice.  In short, they were professional gamblers.  Later, with gambling well entrenched and Saratoga’s location along the notorious bootleg trail coming down through Canada during prohibition, Saratoga attracted gangsters that were both nationally known and locally grown.

Early gamblers in Saratoga like John Morrissey and Richard Canfield built their reputations as fair, professional gamblers.  Morrissey built the famous casino in Congress Park in 1870 and Canfield improved it, solidifying its status as the “Monte Carlo of America.”  Both men respected the local townsfolk and made sure they kept the public on their side by donating large amounts to charities around town.  They also established three rules for their casino; no women were allowed to play, no locals were permitted entry and they closed on Sundays.

All rules to ensure they stayed in the good graces of the local population.

Once Canfield left town, city authorities clamped down on the gambling and ran a relatively clean town for about ten years.  That all changed when Arnold Rothstein, the “Grandfather of Organized Crime” set his sights on the Spa City.  In 1917, Rothstein arrived with a large bankroll and started paying off local officials for the privilege of opening the Arrowhead Inn out by Saratoga Lake.  He was so successful that the following year he built the Brook Resort out Church Street and started making money hand-over-fist during the summers.  Rothstein opened the dam, and a steady stream of gangsters flowed through.

Charles “Lucky” Luciano, Meyer Lansky and Dutch Shultz all worked for Rothstein at the Brook.  Luciano went on to run the Chicago Club on Woodlawn Ave for several years while Meyer Lansky’s gambling interests in the Arrowhead and Piping Rock Club lasted for decades.

Joe Adonis and Frank Costello also had an interest in the Piping Rock Club, the crown jewel of the mafia’s casino holdings in New York.  Adonis was seen nearly every night eating at the dining room and never paying for a meal while Costello’s staff from his Copacabana Club in New York City worked summers in Saratoga.

Louis “Doc” Farone was a local man who rose to prominence in the Saratoga underworld during prohibition.  Associating with national gangsters, Farone kept a tight grip on gambling and bootlegging operations in and around Saratoga.  Not shy about defending his territory, Farone’s men engaged in several shootouts with downstate mobsters associated with Legs Diamond, Mad Dog Coll, and Dutch Schultz when they encroached on the Saratoga market.  One of those three apparently tried to assassinate Doc Farone, but their ambush near Second and Catherine Streets was unsuccessful.

Adam Parillo was another Saratoga native who became involved with some of the most powerful mobsters in Canada.  In 1924 Parillo joined a group of top Montreal mafia men as they held up a bank messenger car.  After the smoke of a shootout cleared, one bank employee and one gangster lay dead.  Parillo turned state’s evidence and spent twelve years in prison for his part in the crime.  He was shot dead on the streets of Saratoga soon after his release in 1936.

Alvin Karpis, who was the FBI’s Public Enemy #1 at the time, tried to hide out in Saratoga Springs at a house near Loughberry Lake.  Fearing he had been recognized while driving down Broadway, Karpis quickly fled the Spa City as federal Agents descended on the town in pursuit.

Peter Christian Barrie was a notorious horse painter and doper who was chased all over England, Canada, Cuba, and the United States as he secretly switched fast horses painted to look like slower horses entered in various races.  Betting on the substituted horse, Barrie and his friends cleaned up at the betting window when the “slow” horse won.   Barrie was finally captured in Saratoga leading a horse from its stall at the track in 1935.

Anthony “Little Augie Pisano” Carfano was the number two man in the Luciano crime family in 1959 when he was gunned down near LaGuardia Airport in New York City.  Back in 1925, Little Augie shot the nightwatchman at Newman’s Lake House and led police on a high-speed chase through the city.

From Morrissey and Canfield to Rothstein and Luciano, Saratoga played host to the nation’s most interesting and notorious criminals for over a century.  Along the way, these men and their friends in public service turned Saratoga from a wild forest known for its mineral springs into a gangster’s paradise.

Greg Veitch is the retired Chief of Police in Saratoga Springs and the author of two books about the history of gambling, crime, corruption, and the mob at Saratoga Springs. “All the Law in the World Won’t Stop Them” and  “A Gangster’s Paradise” are available at www.gangstersofsaratoga.com or www.northshire.com.

Read 3166 times
More in this category: « Starks Dake – Not Just about Ice Cream A Summer Vacation Suggestion »
back to top