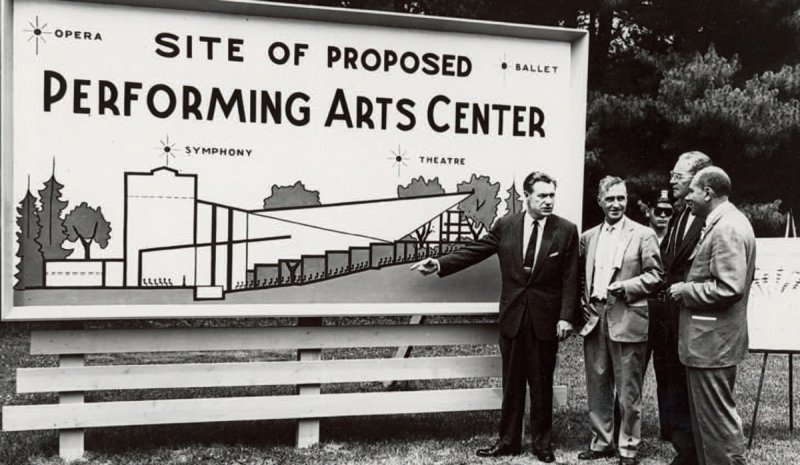 Photo courtesy of the Rockefeller Archives.

An innocuous editorial published February 4,1961 in the Albany Knickerbocker News was the unlikely impetus for the creation of one of Saratoga’s most successful community-based initiatives –its performing arts center.

The editorial praised Stowe, Vt., for exploring the development of a summer festival that would feature the New York Philharmonic and the New York City Ballet. Saratoga native Robert McKelvey, a passionate ballet aficionado, got wind of it and called a meeting with two other dynamic city leaders, Fred Eaton, the civic-minded publisher of the Saratogian, and Newman E. “Pete” Wait Jr., executive vice president of the Adirondack Trust Company. Together the three natives hatched a plan to lure the ballet and orchestra away from Stowe and to their little city.

“It was a bastard of an idea,” Pete Wait was fond of saying, “but when it became a reality it was surprising how many fathers it had.”

The trio found a natural collaborator in Harold G. Wilm, Gov. Nelson Rockefeller’s hand-picked commissioner of the state’s Conservation Department. As a child, Wilm wanted to be a concert violinist; he had switched to hydrology and ultimately became a “parks man,” but he retained a deep love for classical music. Eaton, McKelvey and Wait arranged a meeting with Wilm and a representative of the governor. Their idea received a favorable reception.

The governor’s support was wholehearted. As the plans developed slowly through 1962, the state committed to pay for site preparation as well as parking and walkways, estimated at $600,000, if Saratoga citizens accepted responsibility for construction expenses, initially estimated at $1.8 million (the equivalent of $14.6 million today). As fund-raising began, the Saratogian editorialized, “If Saratoga wants a Performing Arts Center, they’d better put their money where their mouths are.”

Saratoga Springs was then, as it is now, a city whose citizens supported strong civic institutions. In the five years preceding the 1963 SPAC kickoff, more than $1 million had been raised locally for a new hotel, a hospital wing, and a new Skidmore College campus. But nearly twice that amount would be needed for SPAC and, as the newspaper noted, “This is not a community of great wealth.”

A $30,000 challenge gift was made in mid-February by the Saratoga Raceway, which was then highly profitable. A week later, about 90 residents met at the Gideon Putnam Hotel to support the newly-incorporated Saratoga Performing Arts Center, Inc. Sixty-four of those attending made pledges on the spot, and they decided to canvass “every Saratogian” for funds.

The leadership of Eaton, McKelvey and Wait was the basis of success. Under their direction, fund-raising began immediately and by mid-April, Saratogians had pledged $145,000, 60 percent of the goal of $250,000 for local gifts. Wilm reported this to the governor, who agreed that the community was showing real initiative and, together with his brothers, Laurence and John, began making large personal pledges, partly as challenge grants that finally totaled nearly $1.4 million; few knew about these gifts until they were announced publicly in January 1965.

The leadership next turned its attention to the selection of an executive director for the facility. Unexpectedly, in January 1964, Dick Leach, the program director at Lincoln Center since its opening, became the prime candidate. Pete Wait, risking his own funds, went ahead and committed the job to Leach. Leach quickly took charge and started raising “the second million,” without which the bulk of the Rockefeller matching funds would be lost.

The New York Philharmonic dropped out of the plan after receiving a very substantial $17 million grant from the Ford Foundation to present summer concerts in Central Park. Dick Leach went to Philadelphia and secured the Philadelphia Orchestra’s commitment to the new performing arts center. Late that June, the New York City Ballet decided to summer in July at SPAC.

During 1965, the pressure was on. The fund-raising goals were ambitious and, despite great success, a late summer challenge deadline set by the Rockefellers was missed. To raise another $100,000, Charles and Phyllis Dake agreed to chair a campaign “to blanket the city,” and 54 Saratoga women launched a telephone campaign, making hundreds of direct requests. In the end, the Rockefeller brothers and their charitable foundation came through anyway, providing nearly a third of the final cost.

Saratoga’s new “emerald,” as it was called, was a complex and inventive performing arts facility. Its acoustics were planned scientifically, and required unusual skill, since SPAC’s 5,000 capacity was over twice the 2,500 seats generally regarded as optimal for acoustical success. It required amplification for the lawn, yet none was to be used inside the shell. It required a stage suitable for both orchestra and ballet productions, and perhaps the most distinctive feature of the center’s design was a series of three dams on the adjacent Geyser Creek to eliminate the babbling of its small waterfalls that could distract from the music. At the end of its first season, SPAC was judged an unqualified success.

With construction fund-raising coming to an end, the matter of deficits had to be addressed, giving birth to special programs of popular music. Groups like The Who, the Grateful Dead and the Dave Matthews Band have drawn huge crowds of 20,000, 30,000, and as many as 40,000 people.

Read 998 times
More in this category: « The Good Old Summer Time at Vischer Ferry “A Place of Healing For All the World” »
back to top