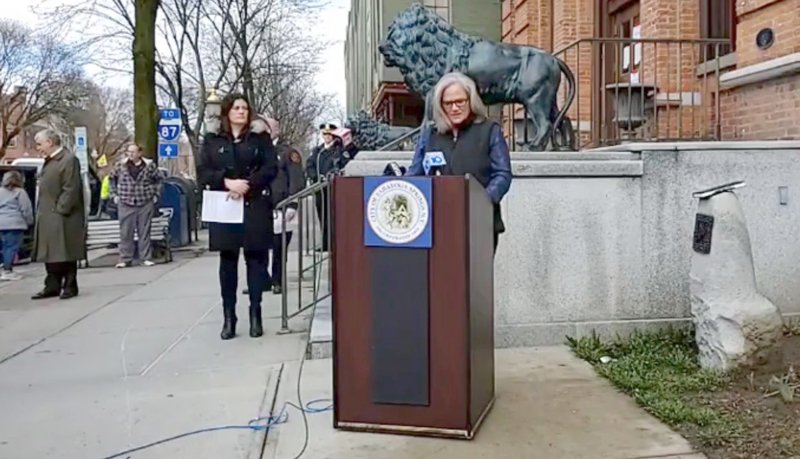 SARATOGA SPRINGS — They stood several feet apart from one another at a noisy intersection where Broadway meets Lake Avenue on a Tuesday morning that marked Day 18 of the city’s declaration as a state of emergency.

Three months into her new job, the city’s Public Safety Commissioner took her turn at the portable lectern stationed in front of a City Hall under renovation, but where the tools of its reconstruction have been muted.

“This is not the time for sleep-overs, play-dates, or dinner parties,” instructed commissioner Robin Dalton.

One of the essential keys of trying to keep people healthy is social distancing – that is: remaining six feet from all other people when in public, and refraining from nonessential gatherings – be it socially, recreationally, or otherwise. Saratoga Springs is taking up Gov. Andrew Cuomo's guidelines - “These are not helpful hints, these are legal provisions” – and implementing those provisions.

“As a city we will be enforcing those through warnings, ticketing and fines if needed, because your actions are that important and our health and safety depends on them,” Dalton said. “The longer people break the rules, the longer we are going to be in this situation. How we come out the other side depends on you – the public…we’re going to need the help of every resident in our city to help slow the spread of coronavirus.”

The gathering included city Mayor Meg Kelly, Police Chief Shane Crooks, Fire Chief Joe Dolan, and Saratoga Hospital President Angelo Calbone – the latter of whom explained that the hospital had 10 COVID-19 cases in the building, and that they possessed sufficient Personal Protective Equipment, or PPE’s, to take care of patients and staff at this time. On Thursday, April 2, The Saratoga County Department of Public Health  announced county-wide that there were 139 confirmed cases of COVID-19 in Saratoga County with 19 of those individuals hospitalized at this time.

Saratoga Hospital has also joined the "statewide hospital system" as proposed by Gov. Cuomo, following the Covid-19 outbreak. "To that end, we are comforted to know  that if Saratoga Springs needs it, help will be there from other New York providers," Mayor Kelly said on April 3. The same afternoon, Congresswoman Elise Stefanik, NY-21, released a statement to say she was "very concerned about Gov. Cuomo’s announcement regarding his plan to sign an executive order to shift ventilators from Upstate to Downstate New York." Stefanik's district includes a portion of the city of Saratoga Springs, as well as municipalities east, west and north of the city.

“The North Country comprises the largest number of seniors of any Congressional District in New York State, the most vulnerable age group to COVID-19. Our critical needs and vulnerabilities must be considered....our rural hospitals are already very limited in resources and we must ensure Upstate New York’s needs for testing supplies and ventilators are fully met."

Mayor Kelly said the city’s parks are still safe for people to go to - as long as social distancing measures are observed. “We want to keep separated right now, and the last thing we want to do is close parks.” One day later, on Wednesday, Gov. Cuomo announced, due to city residents repeated violation of distancing rules, playgrounds in New York City will be closed to the public, although open space areas will remain open.Local authorities in Saratoga Springs re-iterated on Thursday that while the playgrounds and basketball courts where high-density congregation may occur are closed, the parks remain open.

During his daily briefing from the State Capitol in Albany, Gov. Cuomo warned that rules of social distancing will be in place for a while. “We’re still going up the mountain, and that’s where the battle will be in 14 to 21 days, depending on who you believe. That’s the apex,” the governor said. “We still have to come down the other side of the mountain (before everything re-opens).”

During a mid-week teleconference with the press, Congresswoman Elise Stefanik, who represents the 21st District, said she is concerned about non-essential travel. “We want to mitigate non-essential travel from anywhere in the state. We have rural hospitals that are already in challenging positions. If the numbers continue to go up or surge, our rural hospitals are not in the same position as some of the hospitals downstate, in terms of bed-count.”

While the renovation of City Hall has stopped, for the time being, the building of the multi-story parking garage adjacent to the Saratoga Springs City Center has received approval, with some restrictions, to continue with its construction, building for the time when visitors will once again flock to the city and engage in its multitude of events, conferences, and happenings.

Site-specific COVID-19 procedures will be met during the building process and the continuation of the Flat Rock Parking Structure is vital for the city’s ability to recover from the damages of the pandemic, City Center Executive Director Ryan McMahon said in a statement. “The Saratoga Springs City Center Authority’s action is in keeping with guidelines issued by Empire State Development (ESD) and is an essential infrastructure project.”

Financially, the city is bracing for a multi-million dollar loss in revenue due to the pandemic and the resultant closing of all but “essential” businesses, the potential cancellation of major public events, and the stifling of tourism.

At this time, the city is considering a scenario of a $7.8 million loss of revenue for the first half of 2020, and potentially a total 2020 year-end revenue shortfall of $16 million, Finance Commissioner Michele Madigan estimated in March. With a 2020 General Operating Budget projecting total 2020 revenues of approximately $48.7 million, the scenario equates to a 33% shortfall in 2020 revenue to what was previously anticipated.

“We are proceeding with caution regarding how to address this loss-of-revenue scenario.  Both over- and under-estimating our response has consequences,” Commissioner Madigan said in a statement.   “Given the city’s good financial position and excellent community partnerships, we have many options, including cash-on-hand, healthy reserves, borrowing, various bonding tools, and shared services…It is too soon to determine what combination of these efforts will fit our needs.  But it is not too soon to state that all options will be considered very carefully.”

The potential finance losses may be tempered somewhat should the city receive state for hosting a VLT casino. Earlier this year, the city, along with other state municipalities, was warned it might lose approximately $2.35 million in that aid.  On March 31, the city received the hopeful news that the aid may be restored. Madigan said the restoration of that VLT Impact Aid in the 2020-2021 State Budget would be a very positive outcome, particularly as the city works through COVID-19 related fiscal uncertainties.

“We are very hopeful that the city will be receiving its VLT aid based on the budget bill that was published today,” said Assemblywoman Carrie Woerner, via phone late Tuesday afternoon. “The bill was published and is now aging for us to vote on it, and the cut that the governor had proposed in his Executive Budget has been removed. So, we are hopeful that the legislature will soon be voting on that bill and the aid will be available to the city.”

However, Woerner echoed Madigan’s sentiments regarding the restoration of that $2.35 million to Saratoga Springs. “You know, it’s not done until it’s done,” she said.

More in this category: « High-Fiving the Summit: Reaping the Benefits of Family Hiking Signs of Spring! Hatching Chicks During COVID-19 »
back to top