A House Built for Generations to Come 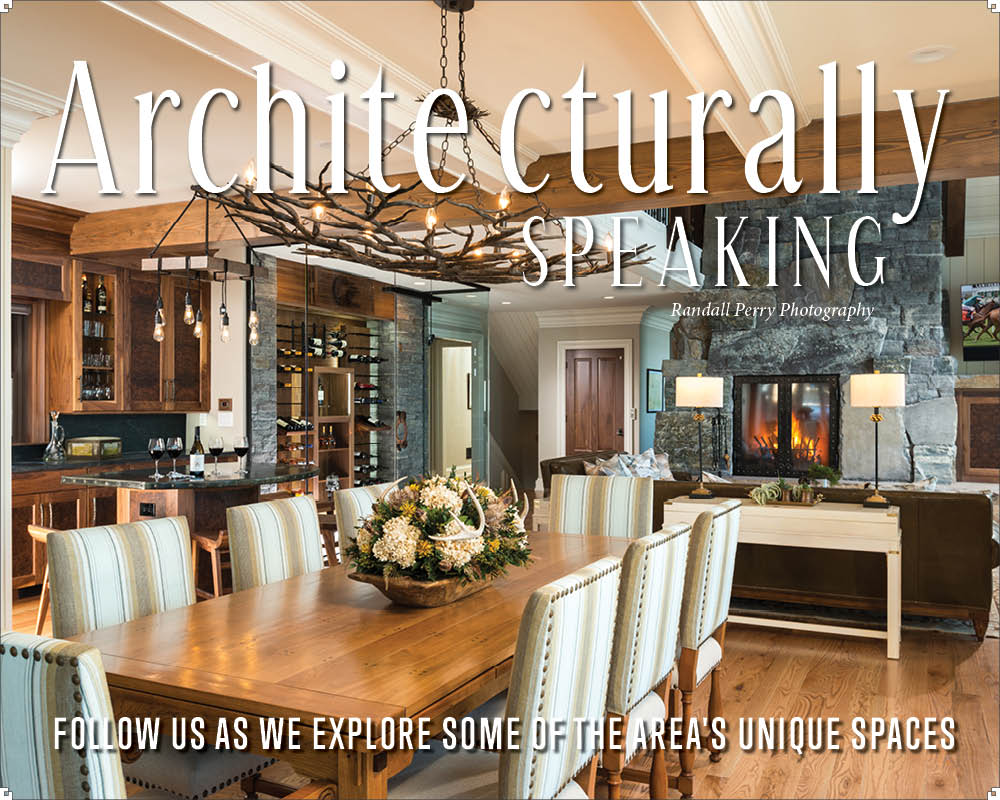 The house sits perched atop a rise in the land along Route 9P overlooking the still expanse of Saratoga Lake. In early-spring, the view is placid, serene and tranquil, belying the bustle of cars, boats and cyclists that travel the length of the lake during warmer months.

The 6,500 square-foot, three story home took five years to plan, design and build, but the finished product was worth the wait and is now, according to the homeowners, a place for family to gather and enjoy the comforts of being together. Ryan Wiedl and Tony Bonacio, of Bonacio Construction worked with architect Jim Zalewski and interior designer Erika Gallagher of Plum & Crimson, along with local masons and woodworkers to incorporate the original structure that stood on the property into the expansive and open floor plan of the new house.

“The homeowners had a great impact on the design of this house and were involved in every aspect,” said Ryan Wiedl.

The owners and their family, who divide their time between Latham and Saratoga Lake, spent their summers growing up on the lake, with the first family cabin built in 1955. Remnants of that original cabin greet you as you first enter the home. The entry hallway opens to a large coat and boot room, with cubbies and hooks and an L-shaped bench. The wall of the cubbies is made from re-claimed wood from the original cabin built by the homeowner’s grandfather.

From the coat room is a large, spacious den area styled for recreation, relaxation and fun. On one end is a large fireplace framed in granite from Adirondack Stone, with tall fireplace doors, courtesy of Saratoga Fireplace and Chimney. Plush leather couches and chairs from Plum & Crimson frame the area around the fireplace. Directly behind the seating area are a pool table, a card table and a large wet bar.

The oversized windows run the length of the room, as they do on every floor of the house. With no window treatments to block the view, the open feel of the large glass -framed in soft white molding- allows the surrounding natural beauty of the lake to dominate nearly every part of the home.

The thematic design of the house has drawn upon the family’s love of horses, the lake and – most importantly – family. Over the years, they collected and carefully preserved remnants from an earlier time on the lake, when casinos like Riley’s were still doing a brisk, if not above board, business. On the sofa table sits an authentic card shuffler; while, on the wall facing the pool table is a framed montage of cards, chips, and other memorabilia from Riley’s and other establishments.

The staircase leading to the main living area is framed by iron spindles and an antique jewel post, which the Erika discovered on eBay. While installing it into the staircase, the construction team found papers stuffed inside. Upon inspection, they turned out to be the school schedule from an MIT student dating back to 1889.

Reaching the top of the stairs, it is hard not to be taken aback by the expansive open construction of the great room. Red oak floors and cream nickel gap paneled walls are accentuated by walls of windows and transoms narrowing into a peak at the top of the 24-foot high ceilings.

The trestles that frame the room were constructed by Legacy Timber Frame on Saratoga Lake and the long beam that spans the width of the room is wrapped in wood from a 36-foot long Douglas fir that was transported here from Oregon and milled in Lake George.

The massive fireplace boasts burled walnut doors and a raised granite hearth that weighs over 10,000 pounds. The entire face of the fireplace is made of granite from Champlain Stone. Local mason Jeff Davidson constructed the fireplace, taking days to meticulously cut each of the massive stones into place.

“You can tell the quality of the mason by the space between the stones,” Tony Bonacio tells me, adding that the fit between the stones is so tight, there is only about 1/8 inch separating them. The estimated total weight of the fireplace is approximately 100,000 pounds.

To the right of the fireplace is a temperature-controlled wine room enclosed in glass, with a nearby tasting area. Each area flows artfully and seamlessly into another, with the large dining table as a focal point. “We wanted to build a home where we could comfortably fit 30 people all together at one table for Christmas dinner,” the homeowner tells me. The house was finished in December, just in time for that wish to come true.

The kitchen, designed by Dawn Zarrillo of Kitchens by Zarrillo in Duanesburg, has Thermadoor appliances, with a marble and onyx backsplash and a Quartzite countertop on the island by Capitol Stone.

Erika explains that one of the goals was furnishing and accessorizing different parts of the great room in a way that creates a smooth transition and design flow from one area to the next.

Another winning strategy are the smaller areas of the house that are separated from the main living spaces. The cigar room is one of those brilliant designs. It is in here that visitors get a true feel for the family, their history and their passions.

The walls and cabinetry are made entirely from walnut, with slate flooring inlaid with oak and cozy leather and fabric furnishings collected from the owners’ travels around the world, interspersed with complementary chairs and accents from Plum & Crimson.

True to its name, the cigar room has a built-in climate-controlled humidor accented by a collection of cigar boxes from across the globe and from local Saratoga haunts. The vintage ash trays, accented with brass horses, are relics from the Saratoga Reading Room on Union Avenue.

Resting in one of the walnut shelves is a mandolin the owner’s grandfather brought with him from Russia, which has remained in the family and is estimated to be more than 200 years old.

A little further away is the butler's pantry, another cozy space that is full is family imagery. The walnut Dutch doors were a specific request of the homeowner, and the antiqued marble countertop is set off with a backsplash of ceramic tiles that are inlaid with sepia-toned images from photos of the family dogs, horses, their beloved barn cat and even their pig, Porkchop.

Local woodworkers Jim and Greg Von Lienen played a huge role in the creation of the cigar room, the butler’s pantry, and many other one of a kind features of the home.

The third floor of the home is the family’s private quarters, with a large loft area separating guest rooms from the master suite and offices. The beauty of the outdoors continued to dominate the third floor as it does the first and second. “one of the design goals here was to use colors and textures that embody the colors of nature,” says Erika. The master suite is a soft sea-glass shade on the walls, with pale accents and the ubiquitous walnut double doors that make the room “pop.”

While the owners say it was a long journey to create the home they envisioned, it was the combined work of the architects, construction and design teams, along with the artisanship of the craftsmen, that “made our house a home for generations to come.”

More in this category: « Holiday Inn to Serve as Temporary Location for City Homeless Sweet Dreams »
back to top