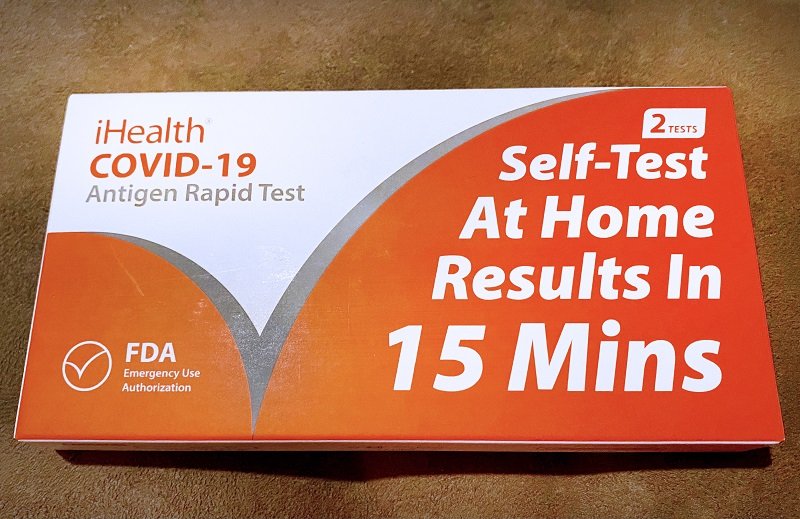 A limited number of COVID-19 self-test kits, such as this one, have been made available to Saratoga County residents. Residents should contact their respective municipal offices to learn about method of distribution. Photo by Thomas Dimopoulos.

Mayor Ron Kim announced the appointment of Angela Rella as his deputy mayor, and provided guidelines for Public Comment period, during which speakers may address concerns or issues for up to two minutes’ time: Be kind; We’re a community; Speak to each other in a way that community members speak, Kim said. “Bickering and fighting, we prefer you not to do that, but, it’s your time. Be factual. We don’t want alternative facts. We want to hear the truth, as you see it, and we’re happy to hear it.”

One meeting change will be in the order of addressing the council. Returning City Supervisors Matthew Veitch, and Tara Gaston – who normally address the council at the end of the agenda – will speak first.

During her comment period on Tuesday, Gaston announced the city had earlier that day received “a small number” of at-home rapid COVID tests that were distributed from the state to the county, and then on to county-based municipalities. The city will be distributing their portion of at-home tests to city residents, while supplies last, from 1-3 p.m. on Saturday at Geyser Road Elementary School. The kits have two tests per box. Proof of city residence is required.

Outside of Saratoga Springs, county municipalities are distributing their allotment of at-home tests in a variety of ways. For specific distribution information, residents should contact their respective town or city hall. A list of municipal phone numbers and websites may be found HERE.

The city had previously received 19,000 K95 masks from the state, which Gaston said she has been distributing to city residents. Masks continue to be available at the Saratoga Springs Public Library, the Saratoga Springs Visitors Center, and the city Recreation Center.

Mayor Kim explained a new “Question Period” segment will be launched in the near future during which community members in advance submit any questions they have for a specific council member. Those questions will typically be discussed and answered at the end of council meetings. Those inquiries will employ a pre-registration tool, and more information will be forthcoming in the near future.

Also soon forthcoming, perhaps later this month, will be a cost/expense tally presentation regarding the vacant city attorney position. The mayor said a discussion will take place regarding a plan aimed at both - reducing city costs and making the position more effective, while meeting the needs provided by a city attorney.

Kim also announced the establishment of a city Infrastructure Committee, which will be tasked with organizing a priority list of city infrastructure projects. The mayor said he has had discussions with U.S. Rep. Paul Tonko regarding federal funds targeting local infrastructure projects, and the local plan is to reach out to experts as well as the local community to initiate a list of needs and potential projects. Kim appointed former Saratoga Springs Mayor Joanne Yepsen as chair of the city Infrastructure Committee and requested each council member propose appointments to staff the committee during the next couple of weeks.

Mayor Kim, a Democrat, complemented DPW Commissioner Anthony “Skip” Scirocco, a Republican, on the “exceptional job” Scirocco and his department has done on the recent renovations to City Hall. Commissioner Scirocco, during his agenda time, made an announcement commemorating the work of former DPW Commissioner and political rival Thomas McTygue on the work McTygue conducted in Congress Park specifically on the Carousel.

Public Hearing on Civilian Review Board Set for Feb. 1

Montagnino set a 30-minute Public Hearing to take place prior to the Feb. 1 council meeting regarding the creation of a Civilian Review Board, as per the recommendations of the city Police Reform Task Force. “Promises were made and now is the time for promises to be kept. I want to shepherd into existence a Civilian Review Board that is meaningful, that has authority and that is there to answer the questions that people have about the way our city is policed,” said the public safety commissioner.

Montagnino added he anticipates hosting an oral presentation regarding the Mount case in mid-February. Previously announced to take place as soon as he took office on Jan. 1, Montagnino said the delay was due to his being stricken and recovering from COVID-19, which recently landed him in the hospital for nine days. Montagnino said he was released from the hospital on Dec. 31.

“From what we heard tonight, it seems like there is progress and things are moving in the right direction,” said Saratoga BLM activist Lexis Figuereo, at the conclusion of Tuesday’s council meeting. “It seems that we may be able to have some actual answers in the community and maybe see some actual change, and not just talk about it. It was a very peaceful meeting and we’re looking forward to meetings being more like this, and to have dialogue with the council members,” he said.

Saratoga Springs City Council meetings are typically held the first and the third Tuesday of each month at City Hall.