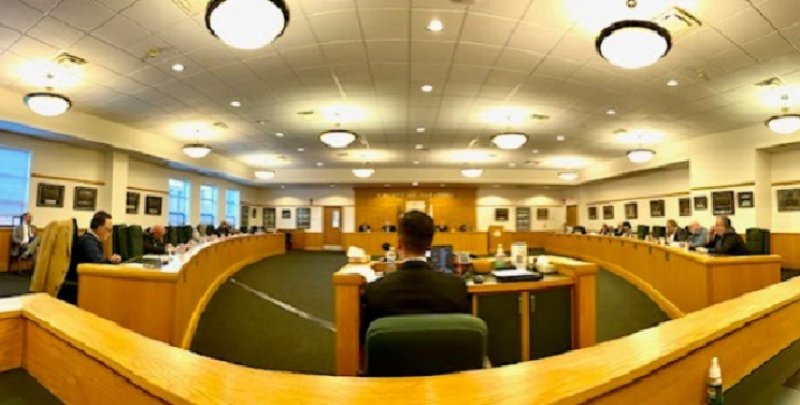 Saratoga County Board of Supervisors gather for their monthly meeting on Feb. 15, 2022.

The Board of Supervisors by a majority vote adopted a Local Law to increase the population threshold that would trigger additional supervisors to 27,500, during its monthly meeting on Feb. 15.

The standing law had provided one electable supervisor for each town or city in Saratoga County for up to 25,000 residents – with a second additional supervisor provided for populations greater than 25,000. Currently, two-supervisor-municipalities are limited to the city of Saratoga Springs and the town of Clifton Park. The town of Halfmoon was poised to join them with recent census data indicating the growing population in Halfmoon at climbing to just above 25,600.

The new county resolution, which takes effect immediately, will maintain the overall number of current members on the board at 23. No reason was given for the measure.

“Whether that’s really because of the number of seats in this room, or you believe that’s the optimum size for a body, or an aversion to change, I can’t say,” said local resident Barbara Thomas when addressing the board during a public hearing on the matter.

See Me, Hear Me

Currently, options available to members of the public wishing to learn about happenings at county meetings in real time are limited to either attending the public gatherings in person, or phoning-in with a designated call-in number and punching in an access code to listen to as much of a meeting as the technology will allow. That’s about to change.

In 2021, the county Board of Supervisors set plans in motion for technology upgrades to its meeting room. The county entered into an agreement with Syracuse-based Presentation Concepts Corporation for design and implementation of the audio/visual upgrades, although those upgrades were not conducted at that time.

The county Board on Feb. 15 reappropriated just over $175,000 in unspent funds it targeted to upgrade the technology last year, to 2022. The breakdown of funding includes about $112,000 in communications equipment, about $16,000 for software, and $45,000 for “other professional services.”

An additional Board resolution this week authorized the 7-member county Buildings and Grounds Committee – which is chaired by Saratoga Springs city Supervisor Matt Veitch - to approve any potential change orders to the agreement with Presentation Concepts Corporation for a total project cost of up to $315,000.

The technology upgrades are anticipated to take place this spring.

• The county board approved just over $69,000 to be paid to the Saratoga Economic Development Corporation for the third and fourth quarter of 2021 for providing marketing services. The county’s annual agreement with SEDC in 2021 was set at a total cost of up to $150,000 “to provide marketing services for the promotion of the benefits of conducting business operations” in Saratoga County.

• The county approved $1.5 million in funding toward the expansion costs of Hudson Valley Community College’s north campus in the town of Malta. The construction of the proposed new two-story building includes program-specific labs, classrooms, and educational support spaces, and is anticipated to increase enrollment in high demand programs by 10 – 20% and create opportunities for more graduates to enter the healthcare, STEM and skilled trade fields more quickly, according to the Board.