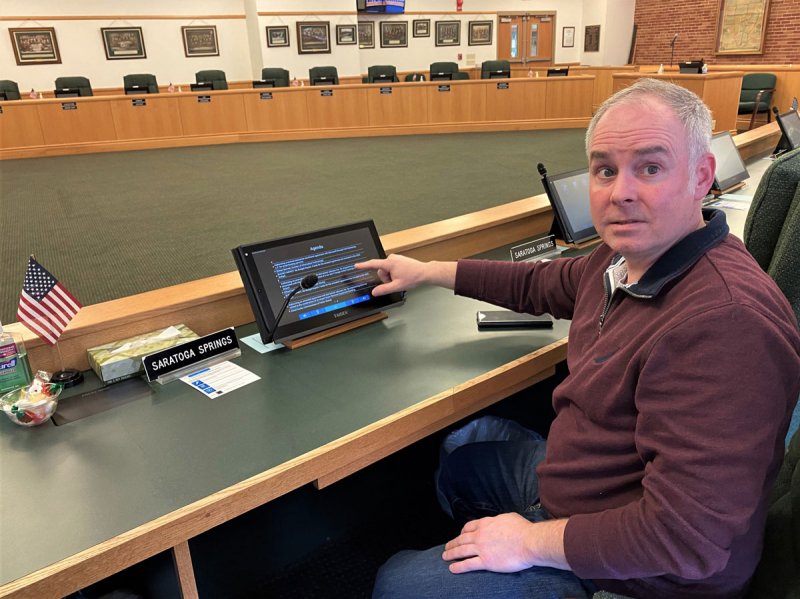 Saratoga Springs city Supervisor Matt Veitch showcasing some of the new equipment that was unveiled this week at the Saratoga County Board of Supervisors room in Ballston Spa. Photo by Thomas Dimopoulos.

BALLSTON SPA — With an annual budget of $381 million – approximately seven times the expense plan of the city of Saratoga Springs - the county spends on average more than $1 million per day, every day of the year, including weekends and holidays. For the first time, residents are now be able to witness from the comfort of their own homes how their elected officials are spending that money in real time.

“I think this will be good for people to have the ability to see what’s going on here, to be more engaged, or at least more interested in county government. Good for the public and good for us,” said Saratoga Springs City Supervisor Matt Veitch, providing a tour this week of the newly installed technology equipment in the large supervisors’ meeting room at the county building complex in Ballston Spa.

In one corner of the room, a multi-shelf cabinet houses an array of units that enable wireless mics and state-of-the art audio, disc storage, internal screen controls and the technology that transmits meetings to the public via live stream. Four cameras are fixed to the ceiling, one in each of the four corners of the room. A pair of large 65-inch flat screen TV’s hang in opposite corners. Two dozen or so smaller computer screens with attached mics line the desktops of the big room for board member use.

“Before all this, the only way you could watch a board meeting was by being here,” Veitch said. An awkward phone call-in system was implemented for remote location meetings during the pandemic, but was often difficult for listeners to follow.

“Now you can watch the meetings live from your house. It’s not easy for everyone to get here and it can be quite a haul from some of the more distant areas of the county, so I think it will be useful to those people as well,” the supervisor said.

Visiting organizations making presentations to the Board will have their presentations showcased on the large screens and visible to those watching both on-site and in remote locations. In addition to live capabilities, county meetings will be archived and available for public viewing on the Saratoga County website – at saratogacountyny.gov - after the gatherings take place.

“We eliminated the old-school projections and screens, which were era-2000, extremely expensive to maintain, and not very good for the audience,” Veitch said. Another benefit of the new system is cutting down on waste; with agenda items and attachments directly loaded onto supervisors’ screens, it is estimated nearly 20,000 pieces of paper will be saved annually, just from the Board of Supervisors meetings alone.

In addition to the monthly Supervisor meetings, the county’s 12 other standing committees will be following suit. For some of those smaller-member committees an adjacent meeting room has, to a lesser degree, also been fitted with technology upgrades to provide audio and video capabilities.

There are 23 supervisors in all - one each representing each of the 21 county cities and towns, with the two higher populous municipalities of Clifton Park and Saratoga Springs each having two supervisors.

In 2021, the county Board of Supervisors initially entered into an agreement with Syracuse-based Presentation Concepts Corporation for the design and implementation of the audio/visual upgrades. Those unspent funds were reappropriated this past February and overall increased to a total budgeted amount of about $350,000. To date, about $178,000 has been spent.

“I think through my urging of my colleagues, eventually we all came around to wanting to have better technology at the county. Last year (fellow Saratoga Springs Supervisor) Tara Gaston chaired the Technology & Resiliency Committee. The first part of this was with that committee, and now the end part is with my (chaired) committee, Buildings and Grounds – but we all really worked together, all the supervisors, Chairman Kusnierz, it came from everyone,” Veitch said.

“We all voted for this, and basically have gone from a 2000’s-era room that had no internet and no way to get out to the public, built up with today’s technology. Going from something we had for 20 years to something beyond, so, it’s a big leap for us,” Veitch said.

This week, as Board Chairman Theodore Kusnierz noted at the start of the supervisors’ April 19 meeting, the future has arrived.

“Today is a momentous occasion,” he began.