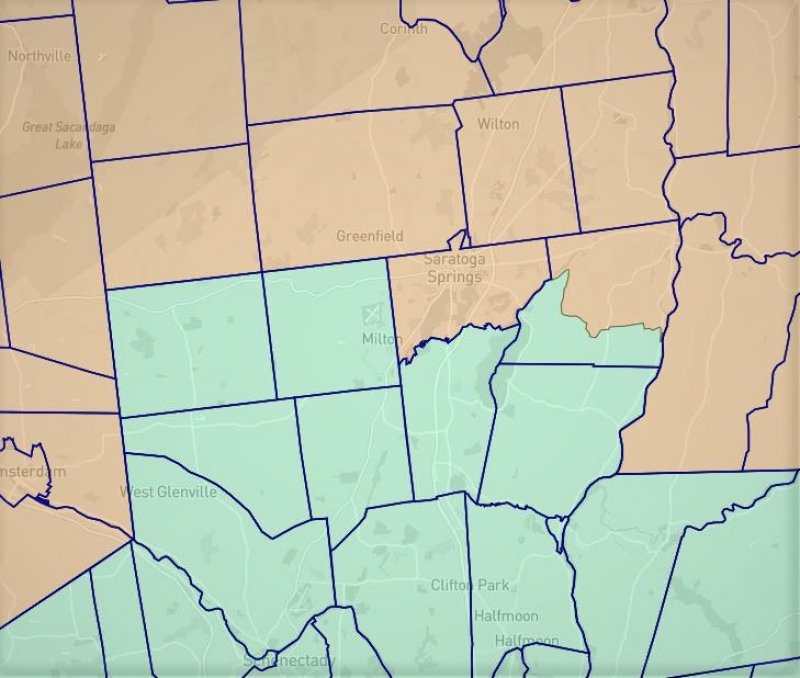 SARATOGA SPRINGS — A new draft mapping the state’s Congressional Districts for the next decade shifts a greater number of Saratoga voters from District 20 to District 21.

The proposed maps, drawn by court-appointed special master Jonathan R. Cervas, would specifically shift a larger number of Saratoga Springs residents into the 21st District, effectively placing Spa City voters in a district alongside those in Plattsburgh, Potsdam and other municipalities along the Canadian border. Republican Congresswoman Elise Stefanik currently represents the 21st district.

The map, from court-appointed special master Jonathan Cervas, splits Saratoga County in a jagged west-to-east manner. The proposed new District 21 begins at the Kayderosserass Creek line at South Broadway, and includes most of Saratoga Spa State Park and points north – including Saratoga Race Course, Yaddo, downtown Saratoga Springs, west to Greenfield and east to Schuylerville, and includes Wilton, Warren and Washington Counties and extends north to the Canadian border.

“I look forward to running for re-election in NY-21 where I have been honored and humbled to earn historic support every election cycle. I will always work my very hardest to deliver real results for the hardworking families in Upstate New York and the North Country,” Stefanik said, in a statement. The town of Saratoga, where Stefanik maintains her home, would remain in her 21st district.

Democrat Congressman Paul Tonko, who lives in Amsterdam, would see his home district carved away from the 20th Congressional District he currently represents. The draft map for District 20 includes: Ballston Spa, Malta, Milton – and the Saratoga County Airport, Round Lake, Malta, and most of Saratoga Lake, Clifton Park, Halfmoon, Mechanicville, as well as Albany, Schenectady, Troy and their surrounding communities.

“I stand with our residents who loudly voiced that Albany, Amsterdam, Saratoga Springs, Schenectady and Troy must remain in the same district so we can continue to speak with a unified voice in Washington. I urge the (special master) to listen to the voters in the Capital District in his final maps. Anything less hamstrings our ability to get things done for our communities,” Tonko said in a statement.

Representatives are not required to reside in the districts they represent. “If today’s maps are finalized, I intend to run for reelection in New York’s 20th Congressional District,” Tonko said.

District 21 – Saratoga County and points north and southwest, is one of only three of the state’s 26 Districts that lean Republican, with a 56.6% to 43.5% split, according to the Cervas special master proposal.  Current officeholder: Elise Stefanik (R).

Overall, there are 26 districts in New York with 3 districts leaning Republican, 15 leaning Democratic, and eight that fall in the 45-55% competitive range.

The last Congressional races were held in 2020. In District 20, nearly 360,000 votes were counted. Democrat Paul Tonko defeated Republican challenger Elizabeth Joy by about 80,000 votes, with Tonko gaining 9,000 votes in that margin of victory in Saratoga County from about 81,000 overall county voters.

In District 21, about 320,000 voted. Republican Elise Stefanik defeated Democrat challenger Tedra Cobb by about 56,000 votes. In the smaller segment of Saratoga County residents, about 52,000 voted, with Stefanik posting a 7,000 vote advantage difference.

The maps are anticipated to be finalized May 20.

More in this category: « Coming June 1: Gas Relief for Motorists Flower and Fruit Mission of Saratoga Hospital Spring Luncheon »
back to top