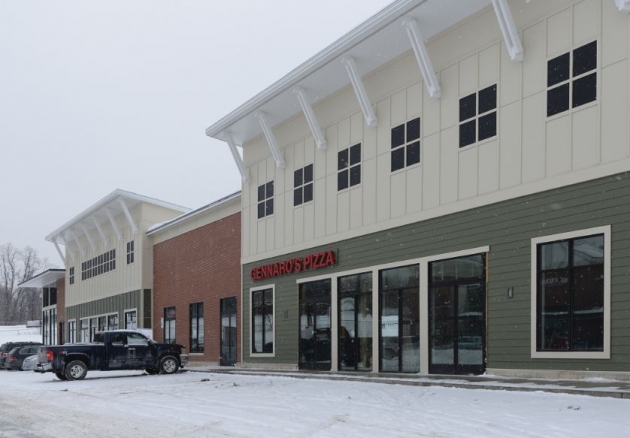 SARATOGA SPRINGS – The Hamlet at Saratoga shopping plaza on Route 50, already home to The Fresh Market and Compliments to the Chef, recently welcomed two new tenants – Smashburger and Gennaro’s Pizza Parlor. The mixed-use retail plaza, located at the corners of Marion Avenue and Excelsior Avenue – about a half-mile from Exit 15 of the Northway, is slowly filling with occupants.

“It’s a high-traffic, high-volume area close to Skidmore College which is helpful for all of the entities that are here now,” said Todd Shimkus, President of the Saratoga County Chamber of Commerce. “And the variety of businesses is great; I think they’ve put together a nice neighborhood of businesses.”

A ribbon cutting for Smashburger, a fast-casual burger restaurant, was held Wednesday, Feb. 4. Franchise co-owners Leo Butera and Marc Goldstein said after first eating at Smashburger, they knew they had to bring it to upstate New York.

“Both of us started hearing about how great Smashburger was, so we checked them out,” said Butera. “The food is great, it sells itself.”

“The energy and hype behind Smashburger is great,” added Goldstein.

The friends of 15 years – Butera is a former restaurant consultant and Goldstein is a real estate professional – say Smashburger offers fresh and affordable food for everyone. The handcrafted burgers are smashed, seared and seasoned to order. Burgers are made using fresh, never frozen, 100 percent certified Angus beef. For those not craving beef, there are chicken options, salad options, and even vegetarian-friendly menu options, as well as beer and wine offerings and hand-spun Haagen-Dazs shakes.

“It has exceeded everything we ever thought,” added Butera. “We ran out of milk and whipped topping, it was pretty crazy. We also serve the food to you and we clean up after you. We serve quality food…that’s the main difference between us and our competitors.”

While Smashburger’s Saratoga location has only been open for just over a week, it has already become a popular stop for those seeking a fast-casual dining experience seven days a week from 10 a.m. to 10 p.m.

“I’m hoping to build a giant customer fan base and please all of our guests,” said Andrew Baumeister, general manager. “By the summertime, I’m hoping to double or triple our sales.”

Aside from the Saratoga location, the business partners have opened an additional Smashburger location in Albany, with more to come. They have a contract with the company for six more within the next five years.

Just next door to Smashburger and Compliments to the Chef is Gennaro’s Pizza Parlor, owned and operated by Wayne and Kathy Cherry. This newcomer to the local pizza scene is already making a name for itself with its authentic Italian dinners, pizza and subs.

Gennaro’s Pizza Parlor makes its dough daily and is stretched out by hand before being baked to perfection in a wood-fired brick oven, which heats up to 750 degrees and can cook a pizza in about three minutes.

“I opened four weeks ago,” said Wayne. “Gennaro Lombardi was the first guy to open a pizzeria in 1904 in New York City, so I named it after him. I just thought – he’s the man who started it all, so let’s name it after him.”

Wayne says he’s always had a love for pizza and worked in the restaurant business before opening a couple of mattress stores; but soon enough, he found himself missing the food industry and wanted to return to the business that made him happiest.

“My pizzas are old-world style which is fresh mozzarella, imported Italian tomatoes, Pecorino Romano, it’s really nice,” said Wayne. “No one does it like that around here. I want people to know that I’m different than the other options.”

The Cherry’s say, over time, they hope to be known as one of the best pizzerias in the area and with the popularity the parlor has had so far, it’s looking like that goal is achievable.

With the success The Fresh Market, Compliments to the Chef, Gennaro’s and Smashburger have had, county leaders are hopeful more businesses will set up shop in the retail plaza.

"There are a couple of vacancies and my guess is by the end of this year, if not sooner, you'll see this plaza full and vibrant," said Shimkus.

More in this category: « Inhospitable Mandate Snow Angels »
back to top