Sitting Down with Stone Phillips 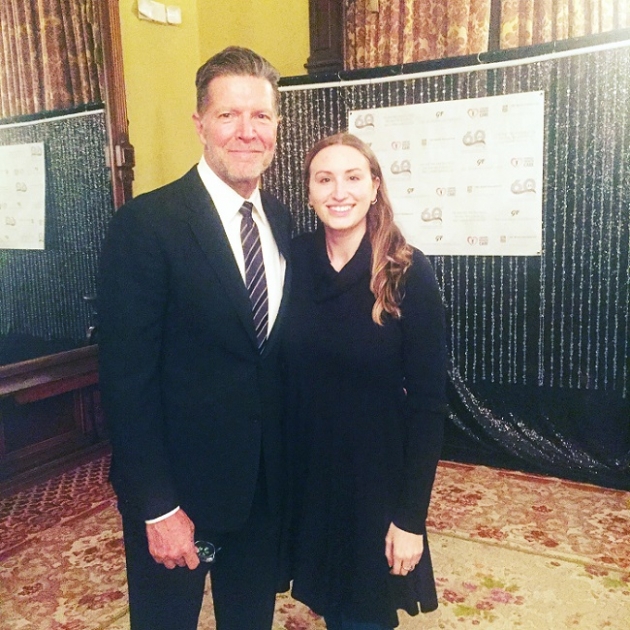 SARATOGA SPRINGS – The Canfield Casino, glittering light radiating from its grand windows, seemed to be welcoming me. I walked down into Congress Park with my back straight, but my mind flying in all different directions. All I could think was, “I’m going to meet Stone Phillips – is this real?”

As the entertainment editor for Saratoga TODAY, I have been blessed with the wonderful opportunity to meet and talk with a diverse group of people, both residents of Saratoga Springs and those visiting.  On this special occasion, I was invited to attend the 60th anniversary gala for the Adult and Senior Center of Saratoga, where Phillips was serving as Honorary Chair. Phillips is best known for his career in television journalism, including 15 years as a co-anchor on “Dateline NBC.” When I was little, I didn’t watch music videos or cartoons after dinner like a lot of kids. I watched “Dateline NBC” instead. My grandmother and I would have deep conversations after the show about the news and the world, which undoubtedly sparked my interest in pursuing a career in journalism.

As I made my way into the Canfield Casino where the gala was being held, I was surprised to find I was one of the first people there and the first member of the press. Punctuality has its perks, I thought, gazing around the room at the warm golden décor and the elegant high ceilings. For six decades, the Senior Center has been empowering seniors to achieve independence and fulfillment through their many programs and services, and I was thankful and honored to be a part of it.

Phillips was easy to spot. Tall and statuesque, I found him in the middle of a conversation with Traci Jersen, the marketing coordinator for the Senior Center. I anxiously approached, first introducing myself to Jersen, before turning to Phillips. When I was visualizing the gala beforehand, I imagined him surrounded by the media and by fans, but since I was so early, it was just us. He had a kind and genuine smile as he introduced himself. When I asked if we could sit and chat, he responded with, “of course!” and led me over to a small sofa.

As I prepared to ask my questions, I sat next to Phillips and pictured all the people I had seen him interview, all the world leaders, celebrities, heroes and notorious criminals. For a moment, I felt as though I was sitting next to all of them. I channeled my inner Stone Phillips, and began. H

Q: What has been the most rewarding aspect of your career?

A: As with most journalists, I feel it’s telling important stories that have an impact on people’s lives. That can be an interview, a feature, a human interest story or a hard news investigation. One of the things I loved about Dateline for many, many years was the variety. We were doing all of those kinds of stories. Those were some great years.

Q: What is the difference between a good piece of journalism and a great one?

A: I think a great piece of journalism is original, it’s built on the facts, and I think, if you don’t care about a story, why report it? I think you ought to care about a story, and I think that often carries you to the next level. I think it’s about having an impact on people. It’s about opening their eyes, maybe challenging them to think about something in a way they didn’t think about before. It’s certainly not following the pack.

Q: If you could go back and interview someone one more time, whom would it be?

A: The interviews that are coming to mind I can’t interview anymore because they’ve deceased. But I would say Boris Yeltsin. I found him very interesting and I would be interested in sitting down with him again if that was possible. Often times when you circle back around to a story, to a person or to an interview much later, you often get more depth, more perspective and sometimes, a completely different take than you did in the moment when news is breaking. In that case, Yeltsin was on a plane. I flew with him from Moscow to Washington for his first summit with George Bush. He was really being very mindful about his agenda during the summit, and to talk with him 20 years later, you’d get a different perspective about his experiences. He was such a pivotal figure in Russian history at that point.

You know, I’d be interested in talking to Lynndie England, one of the soldiers involved in Abu Ghraib. Lynndie was caught in the middle with that. I think there were forces much greater than she at work there. I’m interested in talking to her. Scott Waddle, the submarine commander who was at the helm during that horrible accident with the vessel carrying the Japanese students in Hawaii. Circling around back to that would be interesting.

Q: How did you get involved with the Senior Center?

A: I got a cold call actually, just an e-mail from the director here. She came into my website and wrote me. I was very moved by the e-mail. I’ve never met her or set foot into the Senior Center until today. I had been to Saratoga before, and I think it’s beautiful here. I salute a center like this that has been serving seniors for 60 years, and I just thought well, what can I do to tip my hat and celebrate with them? So I signed on to serve as the Honorary Chair here and I am really happy I did. I went to the Senior Center today for the first time and I am so impressed with what’s going on there. It’s active, it’s vital; I saw smiling faces everywhere I went. It’s a place to take a class, meet a friend, or grab a meal. It’s just got a wonderful feel to it. This evening is going to benefit the Community Connection Program which trains volunteers to help out with transportation or shopping, home visits, respites for Alzheimer’s caregivers, very important work. It’s near and dear to my heart.

Q: What issues facing the aging population are you most concerned with and passionate about?

A: I think isolation and loneliness, as well as homelessness amongst the elderly. There are a host of problems. My mother suffers from Alzheimer’s. We have a lot of work to do there. We need more support for caregivers, families, for loved ones struggling. Those are the issues I’m passionate about.

After our interview, Phillips gave me some excellent advice and wished me the best of luck in my career. Later, as I was leaving the gala, he took time out of the group he was speaking with to say goodbye and wish me well. You wouldn’t think this humble and soft-spoken man once sat across from serial killer Jeffrey Dahmer or the remorseless “subway vigilante” Bernie Goetz. Though I’m only at the beginning of my journalism career, my conversation with seasoned veteran Stone Phillips has inspired me to work hard, stay original, and most importantly, continue to love what I do.

More in this category: « Saratoga Quarter Launched Thanksgivings Past »
back to top