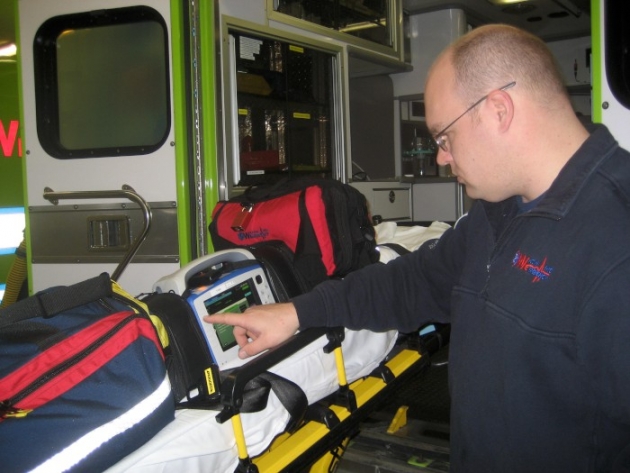 Wilton EMS and three of their distinctive bright green emergency vehicles are the first local ambulance providers to receive the Gateway mobile enterprise network. The network allows the ambulance to transmit the patient’s medical history and condition to the emergency room before they arrive. EMTs used to hand over written information upon their arrival at the hospital.

The Gateway network was developed by a Canadian company called In Motion Technology and cost an estimated $2,000 per unit.

“We’ve always embraced technology at Wilton and tried to correlate that back to the spectrum of patient care,” said Wilton EMS Chief of Operations Nash Alexander. “This was just a natural progression.”

Wilton EMS also began using Zoll X Series portable heart monitors to work in conjunction with the Gateway network. The devices work off a wireless signal inside the ambulance itself and use cellular networks to relay information to other outside providers. The technology isn’t just new for Wilton EMS, but also Zoll Medical as well.

“They’re also using us as a set up site since this is a pretty radical development for Zoll Medical, too. We’re going to be one of the first sites to do this,” said Nash.

When traveling through Northern Saratoga County, cellular signals can vary by location. The Wilton EMS ambulances function as mobile wireless internet hot spots, which allow their devices to function harmoniously during transport.

Beginning in March, Wilton EMS will enter the second phase of their technological upgrades by implementing a system called RescueNet Link, which Nash says will greatly increase the amount of information that will be provided to hospitals upon patient arrival.

“In phase two, rather than have to prompt the download of the information, it is going to be done automatically and done in real time. The hospital is going to be able to see the patient’s medical history, the medications they are on, the treatments we have performed, the patient’s current vital signs and electrocardiogram (EKG) data. We’ll be able to view that on a 19-inch touch screen on the back of the ambulance, which will be generated automatically as opposed to having to prompt it.”

RescueNet Link could be vital in situations involving car accidents, children, the elderly or the incapacitated, where the patient might be unable to communicate with the medical responders what is going on. Nash believes monitoring the vital signs of people suffering from a cardiac episode will especially benefit from this technology.

“The big one is heart attacks,” said Nash. “People with elevated myocardial infarction, especially, where doctors do want to see what the electrocardiogram looks like and what their vital signs are.”

In doing this, Nash and his crew are able to focus on the patient rather than dealing with transmitting the information. It also removes a step in the transmission process, saving more time that could be spent providing care.

“These devices let us send the data to a fax machine or an email address right from the machine. We don’t need to send it to a receiving station anymore,” said Nash.

The Zoll X machine produces a readout of the patient’s vital signs and EKG information, which provider can then watch like a video in the event of an episode during transport.

“We can scroll through the data and if there is a period of time we specifically want the doctor to see, they can view it on the monitor,” Nash explained.

Wilton Ambulance currently has 27 employees with a similar number of volunteers to supplement their staff. Nash says their volunteers are anyone from retired engineers to Skidmore students that serve the 36-square mile stretch of land between Exit 15 and the Moreau town line.

More in this category: « Wilton Board Holds Back on Zoning Decision Maple Avenue Students Grill Local Congressman in Q&A Session »
back to top