Mega-Mansion Up for Auction

SARATOGA SPRINGS – Previously for sale at $8.6 million, one of the most luxurious homes in Saratoga Springs is set to be auctioned off to the highest bidder. On December 19, bidders from all over the world will vie for 36 Stony Brook Drive, a 25,000 square foot mansion on eight private acres in one of the area’s most picturesque neighborhoods, Meadowbrook Estates.

This gated mansion is certainly unique. Perfect for an active, energetic individual or family, it features a full size indoor basketball court, indoor and outdoor swimming pools, a 20-seat movie theater, an entertainment parlor with its own kitchen, and even a one-lane bowling alley. There are five bedroom suites, 11 bathrooms, an eight car garage and a separate guest house with two more bedrooms and baths. 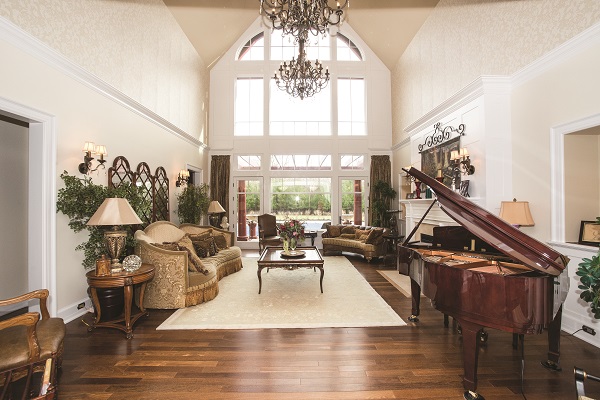 “I think that the amenity package is impressive and it speaks for itself,” said Trayor Lesnock, president and founder of Platinum Luxury Auctions, the company auctioning off the estate. “Though it has a basketball court and bowling alley, it’s not a very sporty home, nothing like what a professional athlete would build. It has a lot of character and pedigree, with its marble floors and staircases. But it’s not stuffy or too high brow either. It’s comfortable, relaxed and livable.”

36 Stony Brook was built in 2007 by David Silipigno, a local entrepreneur with a colorful past. After an investigation of his company, National Finance Corp., Silipigno pled guilty to fraud charges in 2003. He was under scrutiny once again in 2009 when his latest company, First Guarantee Mortgage, was investigated by the FBI for falsifying financial statements.

For the last few years, Silipigno has been out of the limelight and focusing on charity work. The current owner of a large condo in Saratoga and a mansion in Lake George, Silipigno has decided now is the right time to sell the 36 Stony Brook Drive Estate.

“Putting the house up for auction was an idea that I had brought up to the owner, simply because of the market situation,” said Gerald Magoolaghan, the real estate agent from Sotheby’s International Realty involved in selling the home. “Only six homes of this size and magnitude currently exist in Saratoga Springs, but none of them have ever been resold. House values are determined by comparison, but what’s happening is that no one is willing to say if the house is worth $8.6 million because there is nothing to compare it to.”

“Auctions are a popular form of selling big homes. But this is not a bank auction or a forced auction, it’s a luxury auction. The seller is willing to see what the market will bear,” continued Magoolaghan. He believes the home will go for six to eight million at auction.

The auction will take place December 19 at 11 a.m. right on the property. Only registered bidders are allowed to attend the auction, which requires a $250,000 refundable deposit, ensuring that the bidder can afford the property. There is no required minimum bid, but the reserve price of the mansion is $4.9 million, meaning that if the bidding reaches that amount, the owner, Silipigno, is obligated to sell.

So far, there are interested bidders from as far away as the U.K.

“Generally speaking, the goal of any well-executed auction is to bring folks from everywhere as long as they’re qualified. We’ve had 62 formal inquiries so far,” said Lesnock. “I like the market area in Saratoga Springs, it’s a great place. So far, the whole process has gone as expected.”

More in this category: « Pink Palace In Limbo Modern Minutemen? »
back to top