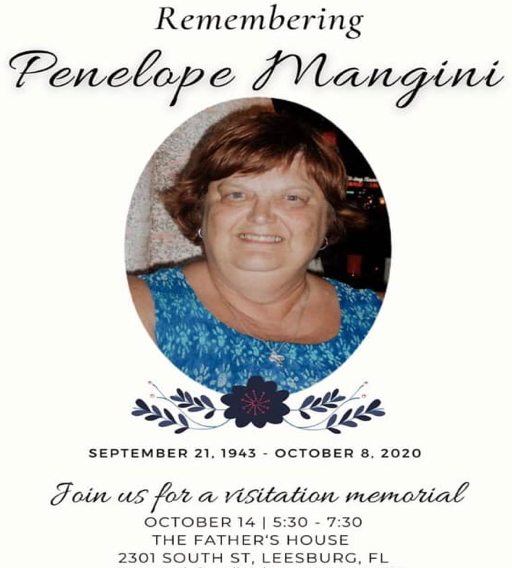 EUSTIS, FL — Penny Mangini, age 77, passed away at her home in Eustis, Florida on Thursday, October 8, 2020. She was born in Saratoga Springs on September 21, 1943. She attended St. Peter’s and graduated in 1961 from Saratoga High and later attended Lake-Sumter State College for Financial Services. Penny loved horses from an early age, something she carried with her into a career in the Standard Bred Horse Racing Industry. In 1981 she went into Banking Services becoming a Manager of Operations at Barnett Bank, then onto Bank of America where she retired from Banking in 2010. She found great joy working as a receptionist at The Father’s House until her final retirement in 2015.

Penny had a great love of travel and scrapbooking her adventures. Her love of the ocean and the Keys in Florida always brought a smile to her face and calm to her heart. Penny loved the history of Saratoga Springs where she was born. She could always be found with a book or Kindle in her hand, whether it was on the many books of her hometown or the classics, Charles Dickens being a favorite and even named her beloved Maltese, Dickens.

Researching her family history had taken her places she found fascinating, and Facebook brought her in contact with family members all over the United States. She had reconnected with old classmates from her school days and loved how easy it was to fall into conversations like it had just been yesterday. She had a unique sense of humor, a deep belief in her political views and boy, did she ever like posting about “coffee!” She was very grateful for the new friends she had made at Pendry Villa and cherished her many friends from her work at the Bank and from Church.

Her faith was a very important part of Penny’s life. It filled her soul with the nourishment of God’s Love, Salvation and made her whole. She found the power of prayer to be one of the most powerful forces on earth and did not get up from her bed until she finished all her prayers for loved ones whom she knew needed the Grace of God.

Her family was her heart, her everything. She could not be prouder of her three children and the wonderful people that they had become. She relished in their achievements and gave a shoulder to their tears. She never grew tired of long conversations and hearing of their adventures, travels or everyday life. Her grandchildren brought her so much joy it was hard to understand how her heart could be contained inside her. She had loved being part of the special days as much as the pick-ups from school and boy, could she go on and on about concerts and achievements! She was thrilled being a great-grandmother and loved all the special moments that only they could bring. She was blessed with getting to spend as much time as she did with her great-grandson Shia. He brought so much light into her life. She recently became a proud great-grandmother again in September.

Penny and her sister Terry were an affirmation that Love is a Verb and spent time daily with phone calls, many filled with stories of Buttons, her cat who could be both a joy and a handful.

She is preceded in death by her mother and father, Lillian and Rocco Mangini, a sister Donalee Mangini, all of Saratoga Springs.

She was a guiding light in all our lives and her passing has left a hole in our hearts that will be hard to fill. She will be forever remembered with Grace, Love and Joy.

More in this category: « Sheila Brooks Donald H. Krywy »
back to top