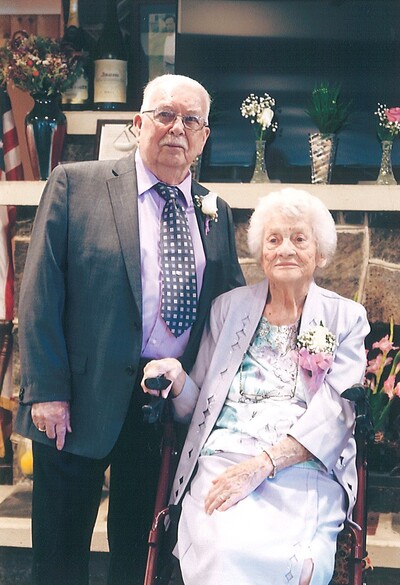 GREENFIELD CENTER — Henry A. Rowland, 95, a lifelong resident of Porter Corners and Greenfield Center, died on October 18, 2021, at Wesley Healthcare Facility in Saratoga Springs,  and is now reunited with his beloved wife, Dorothy.

Henry was born on January 24, 1926, to the late Joseph and Florence Rowland in Porter Corners. He attended a one-room schoolhouse and graduated from Saratoga Springs High School with the class of 1943. He served as a Corporal in the Army during WWII in the European Theater from 1944-1946 and was honorably discharged. Henry’s career began at Milliman & Hall Lumber Company, Saratoga Springs (now Allerdice Building Supply) as a bookkeeper. He later became a manager and part-owner of the business until his retirement in 1983.

Henry married Dorothy Potter on August 29, 1948, and they celebrated 72 years of marriage before her passing on November 29, 2020. He is survived by his sister, Ruth Hayes; son and daughter-in-law, Dick and Joan Rowland; daughter and son-in-law, Lynn and Tom Cumm; and son and daughter-in-law, Stephan and Rosamaria Rowland.  He is also survived by his grandchildren: Shana Cumm and Tom Rupert; Shaun and JoAnne Cumm; Lauren and Rob Delaney; Dominique and Brandon Semzock; and Stephanie and Nicholas Chandler; along with his great-grandchildren: Landen, Blake, and Avery Cumm; Waylon and Eleanor Semzock; and Emily Chandler. Henry is also survived by his sister-in-law, Norma Potter; brother-in-law, George Potter; and many nieces and nephews. In addition to his parents and wife, Dorothy, Henry was predeceased by his sister, Gertrude, and his brothers, Myron, Jarvis, Ralph, Warren, and Winfield.

The family would like to express their sincere thanks to the Nurses and Staff of 3 Hathorn at Wesley Healthcare for their kindness, care, and concern for our Dad during his illness. In addition, many thanks to Eileen Beckwith and the Home Instead caregivers who helped to take care of Henry when he was still at home.

In lieu of flowers, donations may be made in Henry’s memory to Simpson United Methodist Church, 1089 Rock City Road, Rock City Falls, NY 12863.

More in this category: « Dale Haskell David Goodrich »
back to top