A Day In The Life: Saratoga Hospital Workers 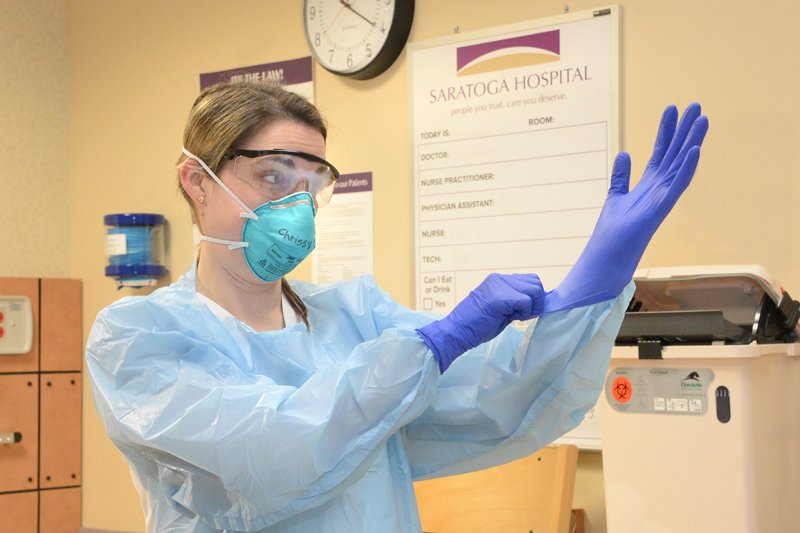 SARATOGA SPRINGS — Hospitals have become the epicenter of COVID-19 around the world, and while most feelings concerning COVID-19 include fear and anxiety with the unknown, two women at the center of it all boiled their experience thus far with COVID-19 down to one word: heartwarming.

On January 20, 2020 a 35-year-old man returned to his home in Washington state after recently travelling to Wuhan, China, the epicenter of the COVID-19 outbreak. That date marks the first recorded case of the virus in the United States. News across the states travelled fast, and Citarella said the first change she noticed in her usual daily routine was the unknown surrounding the virus at the time.

“Initially, when we started hearing about the COVID patients—that the hospital would potentially be seeing these patients—we had a lot of questions, a lot of uncertainty, and the staff just wanting to know what was our plan, what are we doing here,” Citarella said.

Both Citarella and Smith said they started self-isolation early on due to their jobs in the healthcare industry. Citarella said she wanted to keep herself, family, and co-workers safe and took to extreme social distancing as the best approach.

In her own personal life, Smith said she experienced the same initial changes the rest of the world had, and started to self-isolate weeks before the rest of the community on principle, because she was working in the hospital.

“I considered myself high risk and took every precaution possible to avoid being with other people,” Smith said.

In her professional life, Smith said COVID-19 is a daily-changing thing. Since beginning to work with patients who had the disease, everything changed in the way they practiced. Daily conversations involving personal protective equipment (PPE) have happened regularly since.

“We have constant conversations about PPE and how to keep ourselves safe. We’ve seen a ton of innovation, which is so heartwarming, in terms of different ideas for PPE. It’s been very useful. So every day is a brand new experience, really,” Smith said.

Angelo Calbone, President and CEO of Saratoga Hospital, shared his perspective concerning the hospital and how the institution has worked as a collective with other hospitals. Calbone said they coordinate through an early morning call with all the institutions throughout the region as a daily check-in. During that call, they compare notes, share approaches and learnings, and get a sense of what each institution is experiencing and how they’re managing it.

“For the first time in my career, the entire region is functioning, in some ways, as a single health system and not really as competitors. It’s been a satisfying, but unique, experience that I think is helping prepare all the institutions, including Saratoga, really to be in the best position,” Calbone said. “As a collective, we have discussed and implemented changes, such as checking temperatures at all of our doors and timing the curtailment of visitors…we did that in somewhat of a coordinated fashion. We shared how we’re each using our protective equipment for our staff, testing the science and keeping an eye toward what makes our staff safest.”

While the virus forces the community apart, Smith said she was profoundly struck by the mixed emotions COVID-19 brought with it. She said working with a disease that is known as scary—and not yet over—creates questions concerning the unknowns of the virus. However, along with that feeling of fear and sadness the virus creates, Smith countered, “People truly need us, so that is rewarding.”

Calbone has seen that rewarding sense reflected in hospital workers. He couldn’t think of an adjective strong enough to describe the extent to which Saratoga Hospital staff have invested their commitment to patients. He said the time and energy spent in having good plans in place appears to be paying off well, and the staff has left him in awe.

“Their focus, calmness, and ability to take this work on while keeping their heads up has just been…we always knew we had a great staff but really seeing them work through this has been just impressive,” Calbone said.

Smith reflected the same ideas as she mentioned her own amazement with not only the nursing staff, but with other staff, such as the kitchen and cleaning crews. She described everyone as being high quality, caring, and willing to help with whatever anyone needs, creating an amazing atmosphere at work.

A key part in that atmosphere is the interaction both Smith and Citarella have with patients. Smith described her interactions as heartwarming, stating patients appreciate them in return and feel concerned about the staff, which she said is highly unusual.

“It’s a comfort to me. As much as we care, they’re caring as well,” Citarella said.

Smith said, “It also feels very heartwarming to me, caring about those patients. I want to cheer when someone leaves the hospital—I’m just so happy for them.”

“Social distancing and staying at home are the very best things the public can do right now. Our impression is that it’s working and having a positive impact. It hasn’t stopped this, but we do think we are seeing signs that the rate of growth is slowing, which allows all the regional hospitals to better manage the influx. We appreciate what the community is doing, we can tell, and we think it’s working,” Calbone said.

THE UNKNOWN & THE UNCERTAINTY

After reporting the county’s first case one month ago, both Smith and Citarella noticed fear isn’t playing a large part in the virus anymore. They said they no longer see fear in patient’s or co-worker’s eyes as they work with the virus.

“This is very scary, but I have to say, the staff has done an absolutely phenomenal job being extremely professional and calm. I don’t see fear in people’s eyes. I think everyone just wants to help and that is pretty amazing,” Citarella said.

Both women said they feel very safe while working at the hospital, but that feeling changes as soon as they step out of that environment. Citarella is living at her home with her husband, practicing social distancing even inside the home. Besides an occasional trip to the grocery store, Citarella said she keeps to herself.

“I feel very safe [at work]. Being out in the grocery store—it’s the unknown and the uncertainty there,” Citarella said.

Smith said she currently lives by herself, so while it’s easy to self-isolate, the biggest challenge she faces is venturing out to get groceries.

“I have not been to a grocery store in probably a month, and I’ve managed to order things online, but I can’t do that anymore. They’re just not available. I’m going to have to go to a grocery store. I’ve put it off for three weeks now,” Smith said. “I’m becoming a really creative cook,” Smith finished with a laugh.

But it’s no laughing matter for those who travel to the grocery store. From being exposed safely to COVID-19 on a daily basis, Smith doesn’t feel that she should be in a grocery store but simply has no other choice. To keep the safe feeling they have inside the hospital when they are out in public places, such as grocery stores, both women said social distancing is key in uncontrolled environments.

“What influences people to do the right thing? [By not social distancing] people are not choosing the right thing. Why do they do that…I don’t know,” Smith said.

Calbone reflected those same feelings about the safe environment the hospital generates. He said a combination of limited building access, proper hand washing hygiene, and masking has all contributed to create that protected environment.

“We have long-established protocols and products here on how we disinfect and isolate areas. The public can’t access this building anymore. General visitors can’t come anymore. Other businesses and locations can’t necessarily make that work. If they don’t want the public accessing their space, they can’t do business. Whereas, we can keep our staff here taking care of patients, restrict a lot of traffic, and still do what we need to do,” Calbone said.

Calbone encouraged the public to continue proper social distancing and recommended masks should be used as well in public places. He said the masks provide more protection when it’s on someone who is sick. If everyone in public spaces uses masks, it can create a more comfortable sense, similar to the atmosphere the hospital holds.

At the end of the day, Calbone said personal health comes first. While practicing social distancing, proper hand washing, and self-isolating all contribute toward limiting the spread of COVID-19, people still need to pay attention to their health.

“If people need healthcare, they should not be afraid to access healthcare. The emergency room is open; we can still manage almost any case here in the organization. We would hate for people who need care to be staying away, allowing their conditions to worsen because they somehow think they shouldn’t or can’t access the hospital. We know that perception probably exists, but that really isn’t the case,” Calbone said.

More in this category: « Getting Back To The Basics: Direct Market Farmers in Saratoga Report Consumer Increase Real Estate During COVID-19 »
back to top