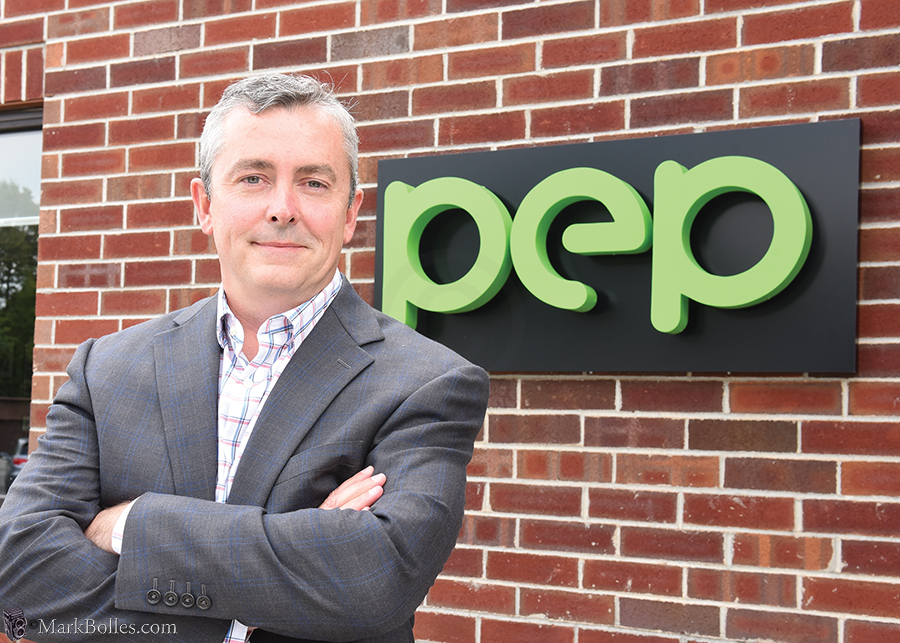 Photos show Patient Experience Project cofounder and president Dan Bobear; the main hallway inside the firm’s Congress Plaza offices; and a group photo of employees after the Aug. 16, 2017 ribbon cutting. Photos by www.photoandgraphic.com.

SARATOGA SPRINGS – With cake, coffee and an abundance of genuine smiles, the president and employees of the Patient Experience Project (PEP) celebrated the firm’s five-year anniversary this week as well as its favorable ranking by Inc., a national business magazine.

“We’ve got a lot of good things ahead of us,” remarked Dan Bobear, the PEP cofounder and president, before a ribbon cutting that was organized Wednesday outside the company’s Congress Plaza headquarters—complete with an amplified sound system.

“This business started in my basement in 2012,” Bobear explained, thanking his wife and children for bearing with him through his early attempts to secure clients.

The Patient Experience Project specializes in marketing and communications focused on people who suffer from rare medical diseases and conditions.

Bobear’s efforts to build the PEP client base quickly bore fruit and yielded rapid financial growth. His office expanded twice before moving last January into the current location behind the Embassy Suites.

Bobear now employs more than 50 women and men in a modern and colorful space. He is also finalizing plans to open another PEP office in Chicago.

In the current “Inc. 5,000” ranking of America’s fastest growing companies, the Patient Experience Project is listed at about the 1,200 mark—the top 25 percentile—with revenue of $7.4 million and an annual growth rate of nearly 340 percent.

David A. Moore, the firm’s creative director, explained the basic PEP mission thusly: “Part of it’s raising awareness; part of it’s advocacy; part of it is really building a bridge between patients, health care providers and the pharmaceutical companies that are trying to produce products that can help these families.”

The PEP client base is more national and international than local, according to Moore.

“One disease that we work with is so rare,” he said, “that in order to bring patients together we had to go to Germany.”

“We make decisions based on what’s the right thing to do for patients, their families, and not only what makes the right numbers for business,” Bobear told those gathered for the Aug. 16 ribbon cutting.

He also thanked the Saratoga Chamber of Commerce officials and representatives of state lawmakers who were present at the event. Saratoga Springs Mayor Joanne Yepsen made her own brief appearance.

“We do work that matters,” Bobear said. “We are proud that our corporate success means that we can impact more lives along the way.”

“Our success would not be possible without the very talented team of experts” on the PEP staff, Bobear concluded. “We’ve got medical experts, content and digital artists, designers, office managers, account and project managers…and basically some of the most talented and smartest people that I’ve ever had the privilege to know.”

More in this category: « Saratoga Hospital Opens Wilton Offices On the Road with the Chamber’s Visitor Van »
back to top